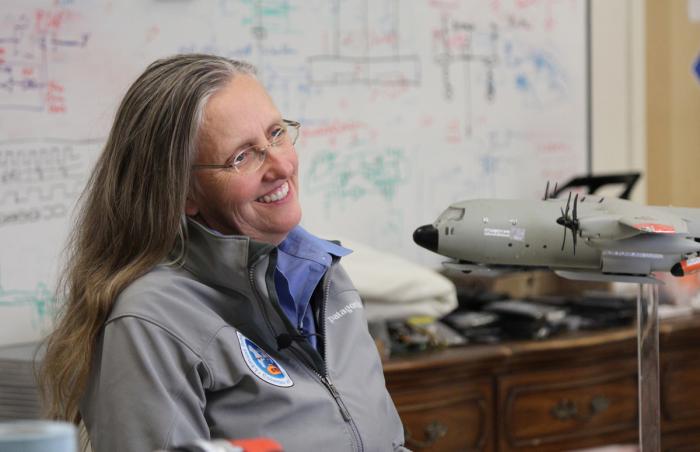 The professional scientific organization has more than 60,000 members in 139 countries. Its Fall Meeting is the premier opportunity for scientists from across disciplines to share their latest research and develop new collaborations.

Bell credits AGU for helping build research connections in her own field, and she sees a greater role for AGU in communicating science and connecting scientists across the disciplines for innovative work.

“AGU is becoming increasingly relevant to major societal challenges, including hazards and climate change,” she said. “With growing breadth and relevance come opportunities and risks. AGU must continue to enable discovery, connection, and sharing ideas for our large, international, and diverse community through both our meetings and our publications.”

Bell, a Palisades Geophysical Institute/Lamont Research Professor, is one of the world’s leading experts in polar science. She directs research programs in Antarctica and Greenland; leads research on ice sheets, plate tectonics, and rivers; and leads the development of technology to monitor our changing planet. As chair of the National Academy of Sciences Polar Research Board, she was instrumental in launching International Polar Year 2007-2008, a major multinational push to study the polar regions.

As AGU president-elect, Bell will chair the AGU Council and serve as vice chair of the AGU Board for the next two years before moving into the president’s role as scientific leader for the AGU and its public spokesperson. Lamont’s founding director, Maurice “Doc” Ewing, and its current director, Sean Solomon, have both served as AGU president.

Lehnert, a geochemist and Doherty Senior Research Scientist at Lamont, is director of the Lamont-based Interdisciplinary Earth Data Alliance (IEDA), which archives data from a wide range of geochemistry and marine geology sources and makes such data openly available with visualization and analysis tools for multidisciplinary work.

“There is an urgent need for AGU to implement change in its governance structure and programs to create new opportunities and incentives for cross-disciplinary science, fostering interdisciplinary exchange, and collaboration among researchers both within AGU and through partnerships with other societies,” she said.

Anderson is a Ewing Lamont Research Professor and co-founder of GEOTRACES, an international program studying the marine biogeochemical cycles of trace elements and their isotopes.

Anderson said he plans to urge AGU to focus on its core mission in service of its membership. “Science is being squeezed by funding, politics and other forces so AGU members need to have a strong organization advocating on their behalf,” he said.

Bell, Lehnert, Anderson, and the other AGU leaders elected this week will start their new roles in January.

“AGU is the largest professional society in the Earth and space sciences in the world, and its members span every discipline across those fields,” Lamont Director Sean Solomon said. “It is fitting that Lamont, given our extraordinary breadth of expertise, should now be the home to three of AGU’s next leaders, including the scientist who will oversee the Union’s transition to its second century.”