Listening to Earthquakes – from Inside the Earth 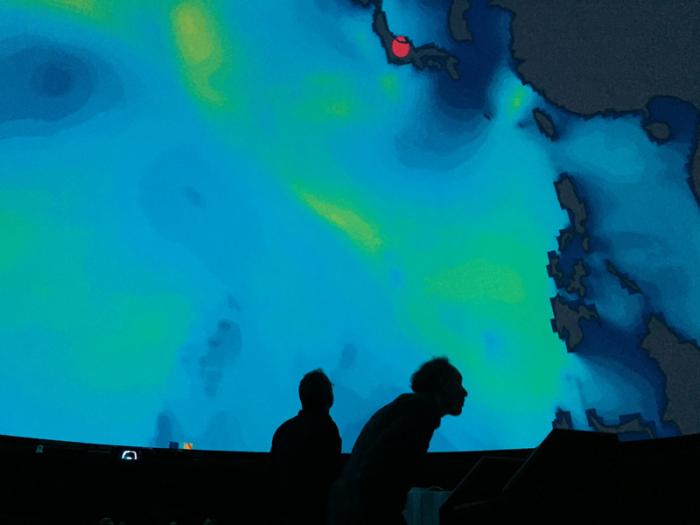 When an earthquake strikes, it sends waves of energy ringing through the interior of the planet. The waves are too slow for us to hear in their original state, but speed them up and the earthquake’s global impact comes to life.

A group of scientists and sound artists working with the Seismic Sound Lab at Columbia University’s Lamont-Doherty Earth Observatory are turning seismic waves into sound and images for an eye-opening educational performance about earthquakes and what seismic waves can tell us about our planet. You can see, hear and feel seismic data from enormous earthquakes, witness the patterns of decades of earthquakes in minutes, and see the seismic effect of ocean storms, including Hurricane Sandy, all as though you were inside the planet.

On Nov. 19, the team will bring their “SeismoDome” show to Hayden Planetarium at the American Museum of Natural History in New York City. For a preview, catch part of the show during the Lamont-Doherty Earth Observatory Open House on Oct. 8.

The videos here give you an idea of the impact, but to sit inside a planetarium as if inside the core of the planet and see and hear the waves spreading through the Earth around you is an entirely different sensory experience.

“These are such complex, intriguing sounds, they excite wonder and curiosity in anyone. Why does that one sound like an acorn hitting a tin roof, and that one sounds like a gunshot? Or why does a nuclear bomb test sound different than an earthquake? The sound provides an entryway into the physics of earthquakes,” said Ben Holtzman, a geophysicist at Lamont who leads the Seismic Sound Lab and narrates part of the show.

The SeismoDome project started with a question over a decade ago. Holtzman and sound designer Jason Candler were playing in a band together, and Candler asked: What does an earthquake sound like?

Turning seismic waves into sound had been done before, but not like this: they coupled the sounds to visualizations that Holtzman’s team created using computer code originally written by an astrophysicist to visualize models of the formation of stars. The animations visualize simulations of seismic waves created by Daniel Peter, then at Princeton University. You can see the result in the video above showing the internal impact as the Tōhoku earthquake struck off the coast of Japan in 2011.

The team sped up both the sound and visuals by a factor of several thousand. They also filtered the sounds and visualized data to illuminate different types of waves in the Earth.

In one video, they suppressed the earthquakes to let viewers hear a year of the ambient noise in the in Northern Hemisphere, which is generated by ocean waves creating waves in the solid earth. Another  shows earthquakes in time and space by representing them as sounds and dots scaled by magnitude on a map ; the team compressing years of earthquakes on a plate boundary (such as Japan) into  a minute, revealing the most active regions. The process lets the audience follow aftershocks from an earthquake, and gives a clear sense of the randomness of earthquake patterns in time and space, and the differences in plate boundaries.

Throughout the show, Holtzman and his colleagues talk viewers through the physics of earthquakes and the meaning of what they’re seeing.

Holtzman joined forces with astrophysicist Matt Turk, Candler, and artist Douglas Repetto to create “SeismoDome,” but their work has much farther reaching applications.

The team is expanding the use of "auditory seismology" in ways that may one day help scientists recognize early warning signs of earthquakes before they strike. Sound could also give scientists a new way of studying earthquakes and the interior of the planet.

Human hearing is highly adept at recognizing physical meaning in sound.  By listening to the seismic data in addition to visual inspection and computer analysis, scientists hope to be able to quickly detect changes that could indicate that a section of fault is destabilizing and about to become a larger rupture.

“As you’re listening to seismic signals, changes in the sound would trigger where to look in the seismic data,” Holtzman said. “If we routinely look at the records this way, patterns will emerge and we’ll start to be able to identify differences.”

Getting to the point of forecasting, if ever possible, would require first understanding what normal sounds are and then identifying the unusual sounds and connecting them with physical behaviors. Holtzman and his colleagues put human hearing to the test a couple of years ago using earthquakes in Oklahoma, a very initial step towards understanding the potential for auditory seismology.

The Hayden Planetarium show is free with registration. The Lamont-Doherty Earth Observatory Open House show is also at no charge.