As Louisiana Floods, Assessing the Influence of Climate Change 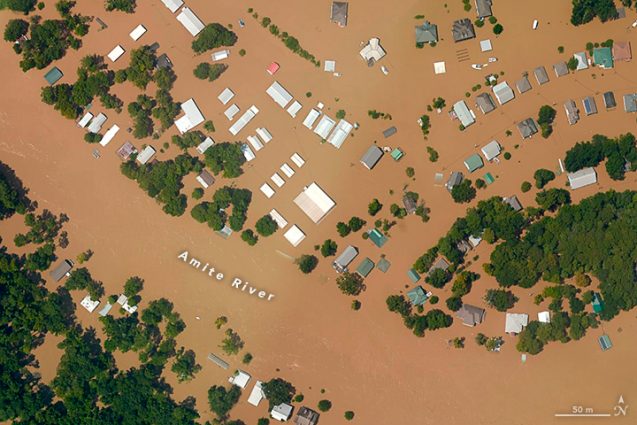 The current flooding in Louisiana is turning into quite an awful event. Even for a low-lying gulf state where flooding is historically chronic, this is extreme. As much as 30 inches of rain fell in some places last week — New York City’s average annual precipitation is about 40 inches — and the disaster has spread since then as floodwaters have surged downstream.

A couple of articles now — one in the Washington Post, and another in the New York Times — discuss the evidence that climate change has made events like this more frequent. These articles contain only qualitative statements, as formal attribution studies haven’t been done yet. These studies will be done soon, I’m sure, and in anticipation of that, I’m writing today about the different types of such studies, drawing on the National Academy report on extreme event attribution that came out earlier this year. (Update: NOAA released the first of these studies in September.)

First of all, no study can tell us that climate change caused an event like this to happen, full stop. Every weather event has many causes. Climate change is just one of them, and usually not the most immediate. At most it can push things a bit in one direction, making the weather more severe if it was going in that direction anyway. Attribution studies can describe and quantify that push.

While attribution studies fall on a spectrum, we can understand the basic differences by categorizing them into two types, with others falling in between these two in various ways. I’m not going to explain the technicalities here, but just describe the different ways the questions can be posed. These influence the conclusions that can be drawn, and even when studies haven’t (yet) been done on an event, different scientists can have one or another of these different “framings” in their minds. Whether the studies exist or not, these differences in approach yield different answers to reporters’ questions. And yet these different answers can be consistent, since they are actually answers to different questions.

One kind of study looks at the event as a whole and asks whether it is more likely to occur now than it would have been in the absence of human influence. These studies consider all factors (or as many as possible), including whether the specific meteorological situation (in this case, a slow-moving weather disturbance with some characteristics of a weak tropical cyclone, though it wasn’t one technically) is more or less likely in a warmer climate.

My guess is that these studies, once done, will show an increase in the probability of occurrence of an event of this magnitude, as a result of increasing water vapor making all heavy rain events heavier. But it’s not guaranteed that they will have this result, because the amount of water vapor isn’t the only thing that matters. Other factors involved in this weather system could, conceivably, change in such a way as to make its occurrence less likely in the first place, counteracting the effect of increased water vapor in the event that it did happen.

Or the models used for these studies could be found to be not good enough to justify any strong conclusions. Attribution studies performed after the western European floods a few months ago, for example, found a significant anthropogenic influence on the heavy rains in France, but were inconclusive for Germany, in part because the models didn’t simulate the observed long-term rainfall trends in Germany well. 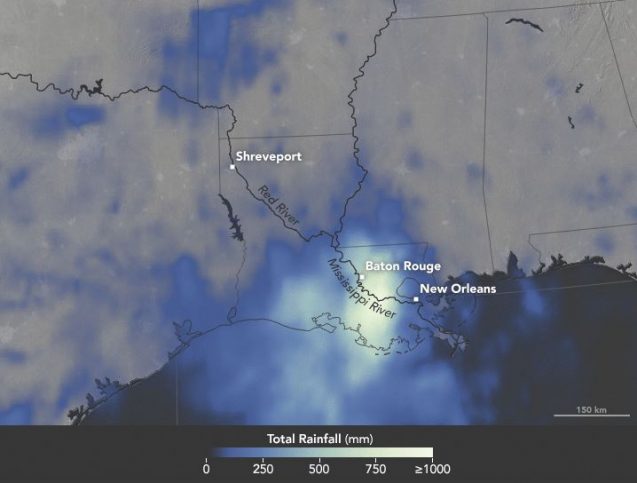 Click to see an animated version of the map showing satellite-based measurements of the rainfall totals every three hours over 72 hours from August 12-14, 2016. These rainfall totals are regional, remotely-sensed estimates, and local amounts can be significantly higher. Image: NASA

The other kind of study (called “highly conditional” in the NAS report; the term “pseudo global warming” has also been used for it) takes the specific meteorological situation for granted and asks whether, once that situation occurs, there is more or less rainfall, and by how much, in the warmer climate.

These studies basically start with the specific type of weather system that actually happened, plunk it down into two different climates, and ask how it differs. This kind of study cannot tell us overall whether the event is more or less likely to occur, because it doesn’t ask that question. It can only tell us how much more severe it is given that it (or something close to it) happened.

This kind of study will almost certainly find that this Louisiana event is more extreme than it would have been in a pre-industrial climate, as a result of the increased temperature and water vapor that have resulted from human influence.

Different models will differ on the magnitude of this effect, but a very rough figure will be on the order of 6 percent for a degree C of warming (and we’ve had close to that by now). And in virtually all of the United States, and most other places in the world where data are good enough to calculate long-term trends, we see increases in heavy rain events. The observed increases are more variable, sometimes being quite a bit larger or smaller than typical model predictions — whether due to natural fluctuations, model errors, observation errors, or all of the above.

So did human-induced climate change make this event more likely? Or, given that a storm like this happened, did climate change make it more severe? The studies haven’t been done yet to answer either question, but my predictions are: probably, but it’s not a given; and almost certainly yes. Those answers are not the same because they’re not answering the same question.

Adam Sobel is a professor in atmospheric and climate dynamics at Columbia University's Lamont-Doherty Earth Observatory and Fu Foundation School of Engineering and Applied Sciences. He leads the Columbia Initiative on Extreme Weather and Climate.