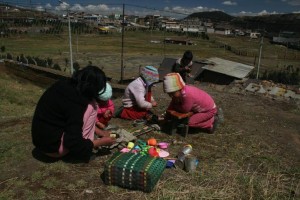 Family in a backyard in the mining town of Cerro de Pasco, Peru. (Vladimir Gil/Earth Institute)

A  new study in the Bulletin of the World Health Organization shows how hot spots of lead contamination in soil can be pinpointed in order to safeguard children against drastic health effects. Researchers led by geochemist  Alexander van Geen of Lamont-Doherty Earth Observatory, studied soil around two Peruvian mining towns, and found high lead concentrations contained in discrete pockets in certain neighborhoods, while other spots were not so dangerous. The measurements were made with an X-ray fluorescence scanner, a handheld device often used by scrap-metal dealers.

“People assume the contamination is everywhere, and it’s not,” van Geen  told The New York Times, which covered the project. “It could be in one backyard and not in another.”
In the town of Cerro de Pasco, where mining goes back over 1,000 years, many houses are built on mine tailings, and children can be exposed to dust in the air, or by touching the ground and putting their hands in their mouths. Measurements as close as 100 yards apart showed widely varied levels. A 2007 study by the U.S. Centers for Disease Control and Prevention in collaboration with Peruvian authorities showed that over half the children in Cerro de Pasco had dangerous levels of lead in their blood. 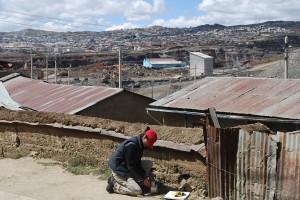 Some 1.6 million people in Peru near mines could be exposed, the study’s authors say. Mapping the worst spots could allow officials to take measures, including fencing off areas and, in the severest cases, carting off or covering soil. Currently, Peru has no standards for lead content in soil, but measures taken around mining towns in Australia and the western United States have greatly lowered lead exposure.

Lead is present in many ores from which other metals are extracted, including copper, gold and silver, and the problem is worldwide. The method of locating hot spots could be particularly useful in Asia, South America and Africa, where people living near mines often have few protections, say the authors.  The study, funded by a grant from the  Earth Institute’s Cross-Cutting Initiative, also involved researchers from the Mailman School of Public Health; Center for Environmental Research and Conservation; and Center for International Earth Science Information Network.
Media Inquiries:
Kevin Krajick
kkrajick@ei.columbia.edu
(212) 854-9729
Tags:
Meteorological
Natural hazards