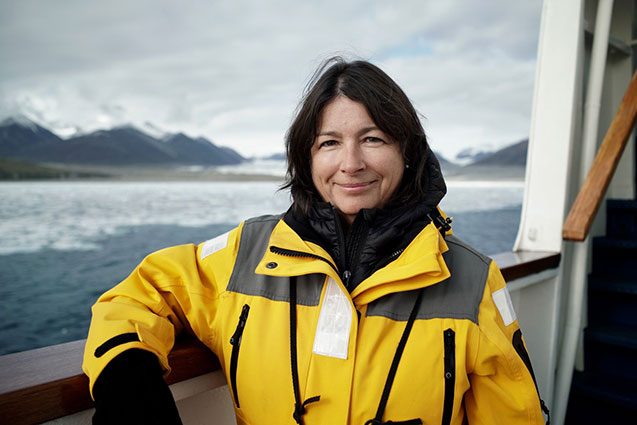 Paleoclimatologist Maureen Raymo has been named director of the Lamont-Doherty Earth Observatory, as well as one of four co-founding deans of the Columbia Climate School. Photo: Garry Tutte/SOI Foundation

Maureen Raymo, who has been serving as interim director of Lamont-Doherty since July 2020, stewarding Columbia’s world-renowned Earth and climate research campus through the extraordinary challenges posed by the pandemic, is now assuming the official role of director. At the same moment, Raymo has also been named one of four co-founding deans of the new Columbia Climate School. And while she acknowledges that taking on the two roles at once will mean a heavy workload, she is more than up for all that comes next. As the first woman and first climate scientist to lead the observatory, Raymo believes her plans for Lamont’s future and its role in the newly launched Columbia Climate School are of paramount importance to the world. In the interview below, she explains a few components of her vision for Lamont.

Is becoming Lamont’s director at this point in our understanding of climate change especially significant?

Absolutely. The next 10 years are crucial in terms of the world’s response to climate change. We know the rate that CO2 is going into the atmosphere and we know how long it takes and how difficult it is to clear it out. We must move away from a fossil fuel–based economy. We are reaching a threshold where the amount we’re putting in is going to lead to an amount of warming that guarantees sea level rise of many meters. Put another way, this is the Titanic still having time to correct its course and avoid that iceberg. We have 10 years to turn. Then it will be too late.

That considered, what do you believe to be your biggest priority as director?

We have scientists on campus that study every single aspect of the climate system. So, it is a huge focus. We have scientists who study floods, droughts, polar ice sheet stability, past climate, and model future climate—all of this is in service of trying to understand the current state we’re in. It’s a problem we’ve created as the human race and I think there’s a lot of passion and commitment to do doing whatever we can to find solutions. We have children, we have grandchildren and we see what is coming down the pike if very dramatic changes are not made. Everywhere in the world, we need to decarbonize, we need to move away from a fossil fuel–based economy. All this is to say, the world needs Lamont’s creative, innovative research now more than ever.

As director, I will be dedicated to fundraising and development efforts to help increase the financial strength and stability of Lamont and our ability to support our scientists so they can continue to build their programs and develop new ideas. I was a soft money (grant-funded) scientist for 20 years. I understand the pressure that brings and I also know the difference it can make when you get institutional support for pursuing new ideas or bringing on new young people and giving them the support they need to build their programs.

I’m also committed to making the Lamont campus a model of sustainability. As we build and renovate buildings, we will partner with engineers to build new, innovative carbon-zero infrastructures. We are in the process of planning the renovation of Lamont Hall. This is an early 20th-century mansion that will be renovated to be a carbon-zero building as it transitions into a state-of-the-art office and conference center.

In terms of your career so far, how do these two roles fit into the story of your life’s work?

I feel so humbled and so honored. Everything I do at Lamont and for Lamont is a labor of love. I have such a belief in the importance of Lamont and its people and what it does and really just the excitement that is Lamont. I say that as a scientist and as a student who grew into a scientist at Lamont. This is a responsibility I take incredibly seriously. My greatest asset in leading Lamont and in serving as co-founding dean of the Columbia Climate School is my love for the planet and my love for Lamont.