In recent years, scientists have discovered hundreds of lakes lying hidden deep beneath the Antarctic ice sheet. Now a team of researchers has found the remains of at least one sub-ice lake that existed when the ice was far more extensive, in sediments on the Antarctic continental shelf. The discovery is significant because it is thought that such lakes may have accelerated the retreat of glaciers in the past, and could do so again. Their study appears this week in the journal Nature Communications.

During expeditions to Antarctica’s Amundsen Sea, an international team collected sediment cores from the sea bottom. The cores, up to 30 feet long, were recovered from under water nearly a half mile deep. The lake sediments were found buried under a 12-foot-thick layer of marine sediment. “We have now verified that, during the last glacial period, there were also subglacial lakes under a massively thick ice sheet,” said lead author Gerhard Kuhn of Germany’s Alfred Wegener Institute.

Roughly 11,000 years ago, Antarctica’s Pine Island Glacier retreated and thinned, causing the moving ice to float on the ocean as an ice shelf. As a result, lakes previously covered by glaciers disappeared into the ocean, when it flooded the Antarctic continental shelf. Only the imprint of the lakes in the form of deep basins and sediments remain preserved. 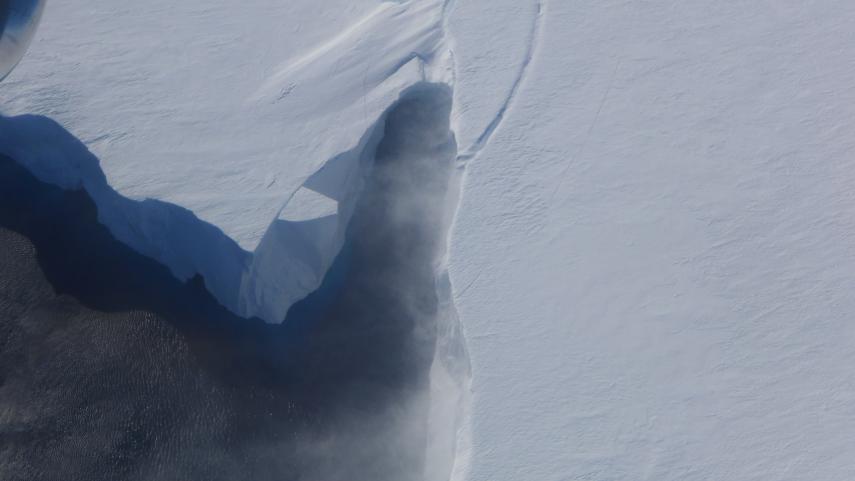 Frank Nitsche, an marine scientist at Columbia University’s Lamont-Doherty Earth Observatory who co-authored the study, said the old lakebed “is probably neither unique nor rare.” He added that further study of such previous lakes “has the potential to improve our understanding of ice sheet retreat and will, eventually, improve the models forecasting future behavior of the current ice sheets.”

The scientists measured the chloride content in water within the sediments as an indicator of its salinity. In parts of some cores, the chloride was extremely low– a clear sign that the sediments were laid down in a freshwater environment. The sediments are believed to provide an archive of changing environmental conditions from the present to the last glacial maximum, about 21,000 years ago, when the global sea level was roughly 425 feet lower than today.

Satellite monitoring shows that water moving from one currently existing lake to another can cause Antarctic glaciers to move more quickly. “This aspect needs to be taken into account in models designed to make predictions on the future behavior and dynamics of ice masses, and with them, the degree to which the sea level will rise,” said Kuhn. “We have every reason to believe that there are more subglacial lakes in the Antarctic – and more so in the last glacial period – than has been previously assumed.” Kuhn said past ice sheets may have reacted much more rapidly to climate changes than previously assumed.

Other contributors to the study are from the British Antarctic Survey, the University of Utrecht, and the Universities of Bremen and Leipzig.