Mentor of the Year Bob Newton: Building the Next Generation of Scientists 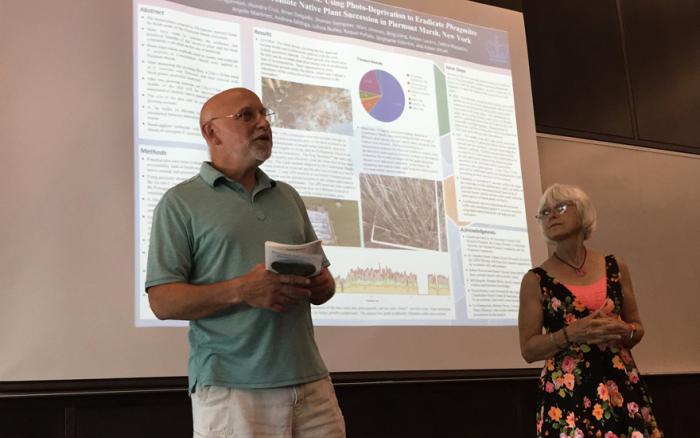 The high school students who spend their summers in the Secondary School Field Research Program (SSFRP) at Lamont-Doherty Earth Observatory are quick to praise Program Director Bob Newton for being a pillar of support who has built their confidence, given them opportunities to hone their leadership skills, and helped them feel at home discussing research with some of the world’s leading scientists.

“You’ve given each and every one of us the opportunity to grow as the young individuals we are today,” SSFRP participant Alondra Cruz said Monday at a ceremony honoring Newton as the winner of Lamont’s 2016 Excellence in Mentoring Award.

“I always look forward to the summer for the simple fact that I always end up learning something new, even if it’s simple things like learning how to manage student loans,” Cruz said.  “I’ve learned that not everything in life needs to give you a result, but rather it is a lesson on what to do better the next time.”

Cruz, now a college student studying engineering, is an example of the success of the SSFRP and of Newton’s mentoring. Of the more than 200 high school students who have participated in SSFRP since 2005, every one has gone on to college, and 45 to 50 percent of them have majored in science or engineering, Newton said. As Newton puts it, “Those are phenomenal statistics.”

The program draws students and teachers from neighborhood high schools in the New York City area for a six-week intensive program of fieldwork and laboratory research. As soon as the students set foot on campus, they are treated as early-career scientists, facing challenging projects and high expectations – and they exceed them.

Several of the students Newton has mentored said that approach helped them build their confidence and find their voice.

“I was in the process of discovering whether science was for a Hispanic girl born and raised in the Bronx … a misguided, confused kid who just needed that extra push,” one student wrote in a letter nominating Newton for the award. “Bob and the SSFRP program are the reason I am in college.…Bob prevented me from falling off into a statistic because meeting Bob was the first time I didn’t feel like one.” 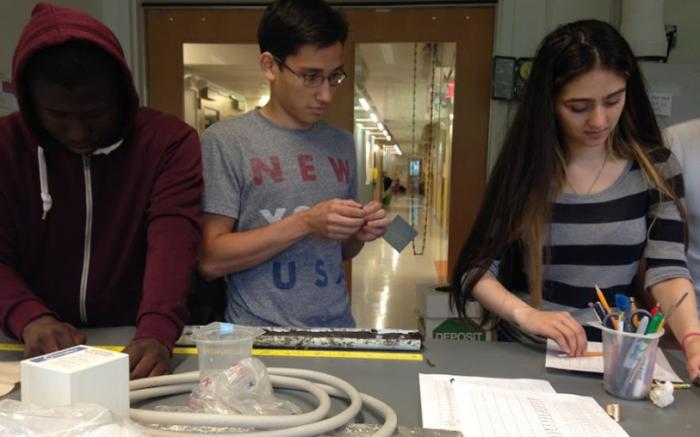 The students in SSFRP do much of their fieldwork in nearby Piermont Marsh, studying microbes, sediments, nutrients, and habitat restoration. They also take classes in data analysis, discuss scientific literature, and turn their research into scientific posters and presentations. Under Newton’s guidance, several SSFRP students have presented their work at the annual meetings of the Geological Society of America, the American Geophysical Union, and the Society of Wetlands Scientists.

Newton thanked the students as he accepted the award.

“Working with these young adults has changed my life,” he said. “The fact that you guys show up, and you show up with all of the enthusiasm and the work you put into it, it is absolutely the highlight of my life.”

“It’s a bit of a twist, me getting this award,” Newton said. “I’m the guy who when a graduate student has really had it and is thinking about doing something other than science and casting about, somebody says, ‘Go talk to Bob. He had a life before science, maybe he can talk to you about a life after science.’”

Ask Newton what he did before oceanography, and it’s a long answer, but it also reflects the deep well of experience from which he draws as a mentor. At various points in his life, he took acting classes, drove a cab, worked as a printing pressman, studied social theory and labor relations, taught math in the City University of New York system, and developed technology for Merrill Lynch and the New York Stock Exchange. He was in his 40s when he earned his Ph.D. in Earth and environmental studies from Columbia University and embarked on his current career as a research scientist.

Newton launched SSFRP with New York City science teacher Susan Vincent 12 years ago. Every summer, they connect the students with scientists across campus for one-to-one mentoring in scientific research.

“What we’re really doing is creating dialogue with students and scientists, and that dialogue is hugely useful to these students,” Newton said. “I also think that this is a very useful dialogue for us at Lamont. Having them on this campus creates conversations, creates social dialogue, and creates experiences for the people of Lamont that changes the way we do science, the way we approach the questions, the way we approach the relationship between science and education.”

Read more about the impact of the SSFRP in this first-person account from student Amenna Peters.