Most of Greenland Ice Melted to Bedrock in Recent Geologic Past, Study Says 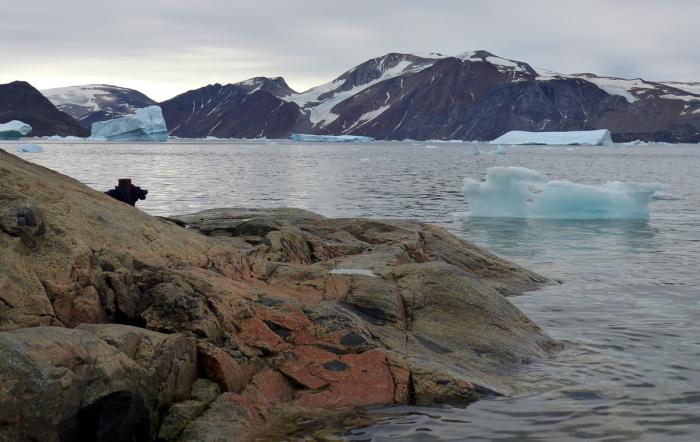 Scientists have found evidence in a chunk of bedrock drilled from nearly two miles below the summit of the Greenland Ice Sheet that the ice nearly disappeared for an extended time in the last million years or so. The finding casts doubt on assumptions that Greenland has been relatively stable during the recent geological past, and implies that global warming could tip it into decline more precipitously than previously thought. Such a decline could cause rapid sea-level rise. The findings appear this week in the leading journal Nature.

The study is based on perhaps Earth’s rarest geologic sample: the only bit of bedrock yet retrieved from the ice sheet’s base, more than two decades ago. The authors say that chemical isotopes in it indicate that the surface was exposed to open sky for at least 280,000 years during the last 1.4 million years. The reason would have been natural, probably tied to cyclic natural climate changes that have caused ice ages to wax and wane. The scientists say that in the most conservative interpretation, there might have been only one ice-free period that ended 1.1 million years ago. But, more likely, they say, the ice vanished multiple times for shorter periods closer to the present. Greenland contains about 684,000 cubic miles of ice – enough to raise global sea levels about 24 feet if it were to melt completely.

“Unfortunately, this makes the Greenland ice sheet look highly unstable,” said lead author Joerg Schaefer, a paleoclimatologist at Columbia University’s Lamont-Doherty Earth Observatory. “If we lost it in periods of natural forcing, we may lose it again.” With human-induced warming now well underway, loss of the Greenland ice has roughly doubled since the 1990s; during the last four years by some estimates, it shed more than a trillion tons.

No one knows exactly what it might take to make the ice collapse, or how long that might take. Some models project that it will melt partially or completely over the next 2,500 to 10,000 years, depending on the amount of greenhouse gases humans pour into the air. Ice loss from Greenland now accounts for about a quarter of the current sea-level rise, which is about 3 millimeters a year, but this could accelerate. Projections of sea-level rise during this century hover around 3 or 4 feet, but many, including the one from the Intergovernmental Panel on Climate Change, do not take Greenland into account. More drastic models put the potential rise much higher.

Coauthor Richard Alley, a glaciologist at Pennsylvania State University, said the study “doesn’t say that tomorrow Greenland falls into the ocean. But the message is, if we keep heating up the world like we’re doing, we’re committing to a lot of sea-level rise.” This could take centuries or millennia, he said.

The rock core was recovered in July 1993 by a U.S. scientific team working in southeast Greenland at the highest part of the ice sheet. It took them five summers to drill through 3,056 meters (about 10,000 feet) of ice and sediment. Then they punched 1.55 meters (5 feet) into the underlying bedrock. The ice cores have since formed the basis of many important paleoclimate studies.

Scientists tried early on to analyze the rock as well, but only in the last year or so have lab techniques become sophisticated enough to tease out the needed information, said coauthor Robert Finkel, a scientist at the University of California, Berkeley, and adjunct senior research scientist at Lamont, who participated in the ice drilling.

Within the rock, the scientists found traces of radioactive beryllium-10 and aluminum-26 – isotopes produced by tiny particles from outer space that constantly bombard the planet. The isotopes decay at known rates, and since they cannot be created if the rock is covered with ice, their abundance can be tied to how long ago the rocks were exposed. Modelers agree that the region where the core came from would be one of the last to melt were the ice sheet to disappear. The authors thus concluded that the ice sheet must have been down to less than 10 percent of its current size when this site was ice-free. 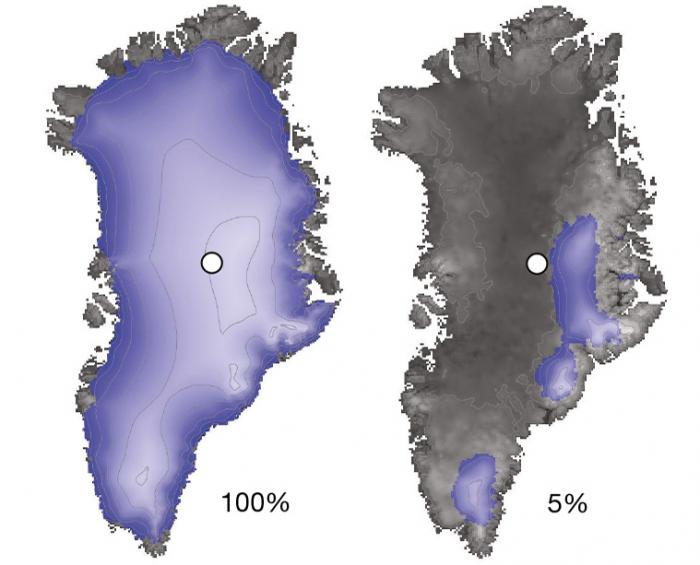 The question of how stable the Greenland ice sheet has been in recent geologic times has been controversial. While some recent studies report evidence that it has remained largely unchanged, there is also evidence that it disappeared in the more distant past, and several studies suggest that the ice wasted to various extents at different points in more recent times. Studies of seafloor sediments off various parts of Greenland have found remains of pollen and other materials dated to a periodic warming cycle about 400,000 years ago, and this has been interpreted to mean that Greenland could have been largely ice-free then. Other studies suggest that the ice surface was substantially reduced during the last major warming cycle some 120,000 years ago, raising sea levels by 12 to 18 feet. But these studies give no clear picture of how long such episodes lasted, and the evidence they use is less direct. “Here we have no question – we interrogated the surface directly,” Finkel said. “Was there ice over you or not?”

Jeff Severinghaus, a paleoclimatologist at Scripps Institution of Oceanography who was not involved in the study, called the evidence “very direct and incontrovertible.” The study “challenges some prevailing thought on the stability of the ice sheet in the face of anthropogenic warming,” he said. “We can now reject some of the lowest sea-level projections, because the models underpinning them assume continuous ice cover during the last million years.”

Thomas Stocker, a climate scientist at Switzerland’s University of Bern who also was not involved in the study, said, “It shows that the Greenland ice sheet has been much more dynamic than thought.” He agreed that the results have implications for projections of sea-level rise.

Scientists have been arguing back and forth about the potential forces that might tip the Greenland ice into quick decline. These could include water percolating from the surface to lubricate the ice sheet’s bottom, or massive ice streams discharging icebergs into the ocean. “This study shows we are missing something big about how the system works, and we need to find out what it is, fast,” Schaefer said.

While the rock core took five years to emerge and more than 20 years for lab techniques to catch up, such research may move faster now. A consortium of U.S. scientists has designed a new drill capable of penetrating deep ice much faster, with the aim of bringing up bedrock rather than ice cores. The apparatus could take a half-dozen samples each year from Greenland or Antarctica said Severinghaus, who is involved in the project. But it has not yet been deployed; the obstacle is funding, which would probably have to come from the U.S. government.

The study’s other authors are Nicolas Young and Roseanne Schwartz of Lamont-Doherty Earth Observatory; Greg Balco of the Berkeley Geochronology Center; Marc Caffee of Purdue University; Jason Briner of the University at Buffalo; and Anthony Gow of the U.S. Army Cold Regions Research and Engineering Laboratory.