Ozone pollution near Earth’s surface is one of the main ingredients of summertime smog. But it is not directly measurable from space, due to the abundance of ozone higher in the atmosphere, which masks the surface. Now, in a new study, researchers have devised a way to use satellite measurements of the precursor gases that contribute to ozone formation to predict when and where ozone will form. These observations may help air-quality managers assess the most effective approaches to emissions-reduction programs and lead to improved air quality.

Unlike at high altitude, where ozone acts as Earth’s sunscreen from harmful ultraviolet radiation, at low altitudes ozone is a health hazard contributing to respiratory problems like asthma and bronchitis. It is formed through complex chemical reactions initiated by sunlight and involving two types of gases: volatile organic compounds (VOCs) and nitrogen oxides (NOx). Both are represented in the study by a major gas of each type, the VOC formaldehyde and NO2, which are both measureable from space.

“We’re using satellite data to analyze the chemistry of ozone from space,” said lead author Xiaomeng Jin, at Columbia University’s Lamont-Doherty Earth Observatory. The research was published in the Journal of Geophysical Research: Atmospheres, a publication of the American Geophysical Union. 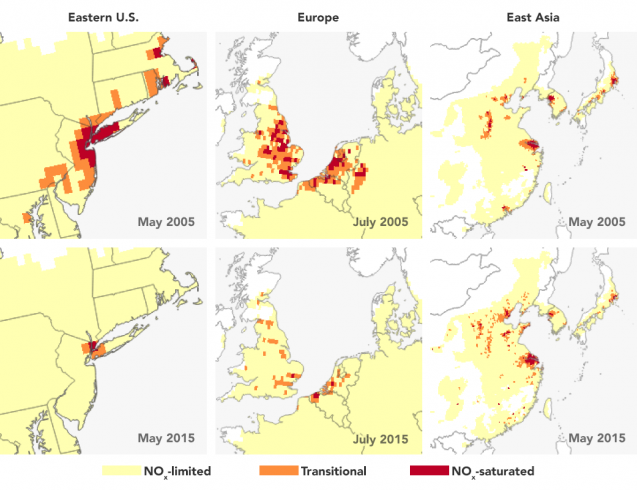 With a combination of computer models and space-based observations, Jin and her colleagues used the concentrations of ozone’s precursor molecules to infer whether ozone production increases more in the presence of NOx, VOCs, or a mix of the two, for a given location. They focused on North America, Europe and East Asia during the summer months, when abundant sunlight triggers the highest rates of ozone formation. Jin and her team investigated whether VOC or NOx was the ingredient that most limited ozone formation. If emissions of that molecule are reduced, then ozone formation will be most efficiently reduced.

“We are asking, ‘If I could reduce either VOCs or NOx, which one is going to get me the biggest bang for my buck?’” said coauthor and atmospheric chemist Arlene Fiore of Lamont-Doherty.

The findings show that cities in each of the three regions are more often VOC-limited or in a transitional state between VOC and NOx-limited. In addition,a 12-year data record of satellite observations shows that a location’s circumstances can change. For instance, in 2005 New York City’s ozone production during the warm season was limited by VOCs, but by 2015 it had transitioned to a NOx-limited system due to reduced NOx emissions resulting from controls put into place at both regional and national levels. This transition means that future NOx reductions will likely further decrease ozone production, said Jin.

Volatile organic compounds occur in high volume naturally, given off by some plants, including certain tree species. They can also arise from paint fumes, cleaning products and pesticides, and are a by-product of burning fossil fuels in factories and automobiles. Nitrogen oxides are a byproduct of burning fossil fuels and are abundant in cities, where they are produced by power plants, factories and cars. Because VOCs have a large natural source during summer over the eastern United States, for example, emission reduction plans over the last two decades in this region have focused on NOx, which is overwhelmingly produced by human activities.

Space-based methods for monitoring ozone chemistry have the potential to complement surface-based measurements made by air-quality management agencies. The view from space offers consistent coverage of broad areas, and provides data for regions that may not have ground stations, said the scientists.

The Lamont-Doherty scientists collaborated with others at the University of Rochester; the Royal Netherlands Meteorological Institute; Wageningen University in the Netherlands; the Belgian Institute for Space Aeronomy; Harvard-Smithsonian Center for Astrophysic; the U.S. Environmental Protection Agency; and NASA’s Goddard Space Flight Center.

This story was adapted from a NASA press release.