News Subtitle:
Exploring Where Liquid Goes, Even in Winter 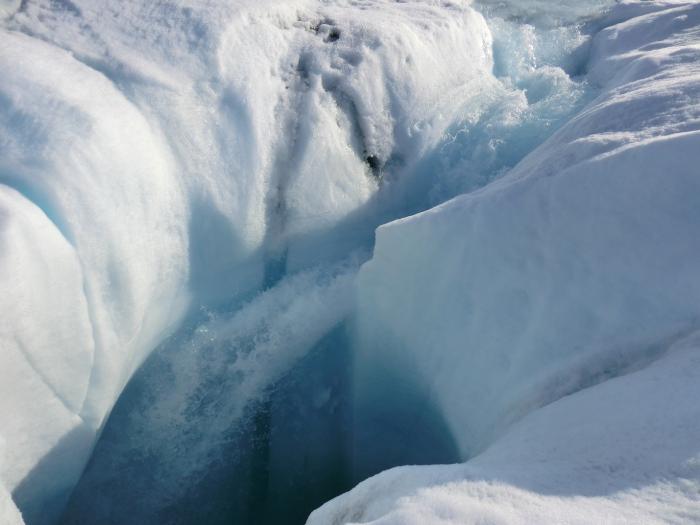 When summer temperatures rise in Greenland and the melt season begins, water pools on the surface, and sometimes disappears down holes in the ice. That water may eventually reach bedrock, creating a slipperier, faster slide for glaciers. But where does it go once it gets there, and what happens to it in the winter? A new study helps answer these questions.

Scientists have been able to observe liquid water at single points by drilling holes, but those observations are limited. An improved technique developed by a graduate student at Columbia University’s Lamont-Doherty Earth Observatory and her colleagues is now expanding that view across entire regions, and across seasons for the first time, by making it possible to use airborne ice-penetrating radar to reveal meltwater’s life under the ice throughout the year.

The first results, just published in the journal Geophysical Research Letters, reveal extensive winter water storage beneath the ice. They suggest that glaciers’ response to melting depends not only on the rate at which meltwater flows down, but also on the amount of water stored beneath the ice through the winter, and on the topography and permeability of the land below, said the study’s lead author, Columbia graduate student Winnie Chu.

“The distribution of meltwater evolves constantly, switching from one location to another,” said Chu. “By knowing how this distribution changes seasonally, we can better understand the spatial linkage between ice and water flow.” Chu said that more meltwater is produced as temperatures rise, and the study suggests that Greenland has the potential to store some of it at the base of the ice. This could potentially mediate the impact of meltwater on summer ice flow by maintaining stable subglacial water pressures through the year, she said.

Greenland’s ice sheet has a wide range of temperatures and impurities that cause the ice to freeze in different ways, and those variations have made it difficult for ice-penetrating radar to identify pockets of water beneath the ice. Chu and her colleagues developed a way to correct for those variations by using 3D thermomechanical ice-sheet models and knowledge of the ice sheet’s chemistry to bring out the reflectivity that indicates water in radar data.

In the study, the researchers describe where water was prevalent inside the ice at the start of the melt season and where it was present at the end of winter in Russell Glacier and neighboring Isunnguata Sermia, in western Greenland. They showed that early in the melt season, most of the meltwater reaching bedrock was along sediment-filled troughs beneath the glaciers.  In contrast, during the winter, the bulk of the region’s subglacial water could be seen pooling in higher bedrock ridges, while the lower-elevation troughs were mostly dry.

The scientists suspect that during warmer weather, water pressure opens drainage systems in the ice, allowing meltwater from the surface to flow through to the troughs below. Those channels may close in the winter as less water pours in and water pressure decreases. In the troughs, the sediment-filled floor allows for better drainage.  “Any remaining subglacial water then likely continues to seep through groundwater drainage, leaving little wintertime storage at the ice-bed interface," the authors write.  But the ridges are made up of less permeable material, so water can pool on them.

The effect of water is evident in the changing speed of the glaciers during the year. During the 2010 melt season, Russell Glacier flowed more than twice as fast as it did at the end of the following winter, the authors write. The glacier speeds up in early summer, suggesting water pressure rises rapidly there, Chu said. It decelerates quickly at the end of summer, suggesting that the formation of channels in the ice creates more efficient, faster drainage of the meltwater from the glacier bed, the scientists write.

Neighboring Isunnguata Sermia accelerates more slowly. That could be associated with its apparent widespread subglacial water storage capacity, which may be maintaining water pressures through the winter, Chu said. Russell Glacier, in contrast, has less winter water storage and would experience a greater increase in water pressure at the start of the melt season.

“Our findings suggest that the winter subglacial hydrological state could pre-condition the glacier response to additional meltwater in the following summer,” Chu said.

The technique used in the study provides a clearer view of how water moves beneath the ice than any other existing method, said Joseph MacGregor, a glaciologist and geophysicist at NASA-Goddard Space Flight Center who was not involved in the study.

“We have prevailing ideas of how water flows on the surface of ice sheets, through ice sheets, and under ice sheets. What we don’t have are great observations of where that water is beneath the ice most of the time,” MacGregor said. “This result changes that state of affairs. It also demonstrates the value of airborne remote sensing for testing fundamental glaciological hypotheses.”

The paper’s coauthors are Dustin Schroeder of Stanford University; Helene Seroussi of the Jet Propulsion Laboratory at the California Institute of Technology; Steven Palmer of the University of Exeter; and Timothy Creyts and Robin Bell of Lamont-Doherty Earth Observatory.