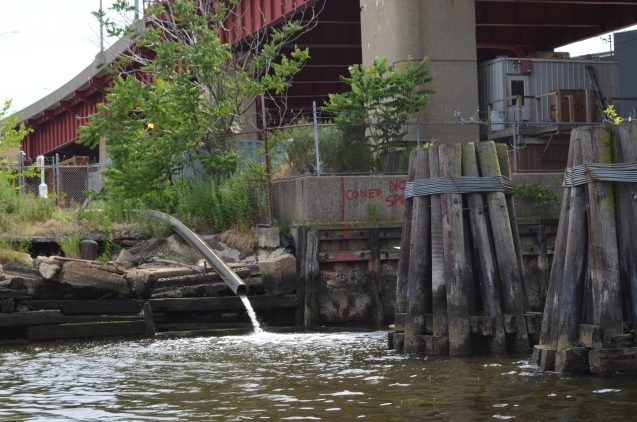 It’s morning. Brush your teeth. A quick shower, shampoo. Going to the beach? Get on the sunscreen. OK, ready to roll. You’ve just sent countless microscopic plastic bits swirling down the drain, through the sewer system and into the nearest water body.

Many common products including toothpastes, cosmetics, shampoos, soaps and sunscreens contain tiny plastic spheres. The ball-bearing effect of these so-called microbeads gives products their smooth feel and spreadability. Introduced in the 1990s, they are too small for sewage plants to filter out, so they go straight to rivers, lakes and oceans. Here, pesticides, drugs and industrial compounds like PCBs tend to glom onto their surfaces. Zooplankton, fish and shellfish eat them. They appear to be building up in the environment, adding to the burden of plastic bits that result from the breakdown of larger objects like plastic bottles, bags and other items that potentially threaten ecosystems and human health. Many researchers have been studying pollution resulting from larger objects. But scientists at Columbia University’s Lamont-Doherty Earth Observatory are now doing what may be the first assessment of microbeads in waters around New York City, where by one estimate, some 19 tons are flushed into the water each year. How prevalent are they, and where do they end up? Do they degrade, float in the water, settle into the sediments, enter into the food chain? The effort is led by marine biologist Joaquim Goes and geochemist Beizhan Yan. Goes got interested last year, when he took water samples that turned up huge concentrations of microbeads off South Korea, a major manufacturer of cosmetics. He then examined existing water samples from as far off as the Arctic Ocean and found them there too. He and Yan decided to investigate near home, partly with the help of high-school students in a summer program at Lamont studying the presence of plastics in marine organisms. One recent summer day, Goes, Yan and two Columbia students boarded a 36-foot vessel operated by Riverkeeper, a nonprofit that works to conserve the Hudson River and nearby waters. Captain John Lipscomb picked them up near Lamont-Doherty, along the river’s east bank just north of Manhattan. Working their way downriver, they stopped several times to sample water and sediments. By afternoon, they were in New York harbor just off the Statute of Liberty. Wakes from big ferries and cargo ships rocked the little vessel from multiple directions. They dipped a fine-mesh plankton net into the waves and filtered the water in it into a quart jar for later analysis. They dropped a little steam-shovel-type scoop to grab a sample of the mucky bottom. Goes was also testing a new flowmeter that sucks surface water through tubing into an analyzer that sorts out floating particles by shape, displaying them in real time on a screen. Amid the irregular bits of junk, many with the telltale spherical shape of microbeads flashed by on the screen. Lipscomb rounded the tip of Manhattan and headed up the East River, under the Brooklyn Bridge, and toward Newtown Creek. The creek—actually now more a walled-in open sewer—divides Brooklyn and Queens, and is lined with the remains of defunct factories, oil refineries and toxic waste dumps, along with operating scrapyards and other industrial facilities. It is one of the most polluted places in the United States. Here, the flowmeter went crazy. A few weeks after the cruise, inspections by microscope showed that water from each of the boat’s seven stops were loaded with plastics. Many appeared to be eroded bits and fibers of larger items—remains of carpets, clothing, food packaging, paints—but among them were also apparent microbeads.  Plastics from Newtown Creek carried heavy doses of atenolol, a drug used to treat high blood pressure. (“People in that neighborhood must be under a lot of stress,” quipped Goes. “Soon maybe we’ll learn other things about them.”) Testing has only begun; Goes says further analysis will probably turn up other pollutants sticking to plastics, and allow the team to estimate the quantity of microbeads versus other plastics. This summer, three high-school students worked at Lamont on a related project to study the presence of plastics in the guts of common marine organisms from around the world, including those sold at local fish markets. Goes and Debra Magadini, a teacher at Berkshire Waldorf High School in Stockbridge, Mass., helped the students do the analysis. They spotted plastics in every species studied. The majority were plastic fragments broken off larger objects. But the students also found microbeads in small fish collected from a Hudson River marsh near Piermont, N.Y.,  and in oysters from the New York harbor vicinity, where a project is underway to restore the bivalves’ once huge populations. Microbeads also appeared in commercial shrimp from South America, and clams from China. Magadini hopes to resume the study next summer. The problem probably will not abate much any time soon. A federal law passed in 2015 outlaws plastic microbeads in rinse-off cosmetics, and about a dozen states have followed suit. But these laws do not cover most other products, and most do not take effect until 2018. A few large manufacturers of soaps and related products have started phasing out plastic microbeads voluntarily in favor of biodegradable substitutes. Meanwhile, say Goes and Yan, it is important simply to figure out what’s already in the water.