North Atlantic Is Getting Less Salty, but It's Too Soon to Blame Climate Change 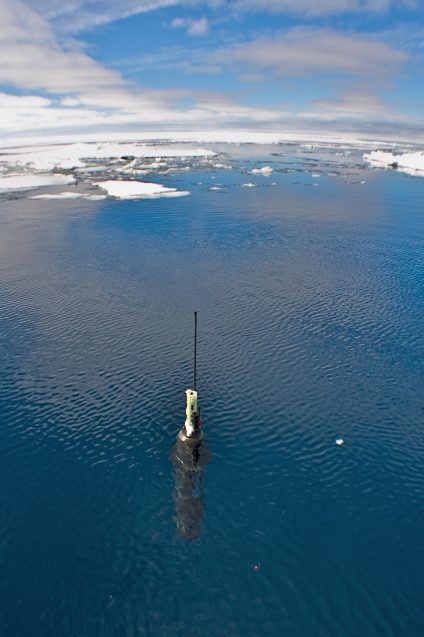 Salinity in the North Atlantic dropped dramatically over the last decade, according to a new study that used data from a floating network of sensors to get the most detailed picture yet of changing ocean conditions in the region.

But researchers say it’s too soon to say whether the decline is due to an influx of freshwater from melting ice on land or sea, or part of a natural, longer term cycle. A research team at Columbia University’s Lamont-Doherty Earth Observatory and Johns Hopkins University published the results in the Journal of Climate’s April issue.

Between 2004 and 2015, salinity fell by as much as half a gram of salt per kilogram of seawater in the sub-polar North Atlantic, a region that includes the Labrador Sea dividing Canada and western Greenland. That’s the equivalent of diluting the area with 5,000 cubic kilometers of freshwater, says the study’s lead author Jan-Erik Tesdal, a PhD student at Columbia.

Though many forces cause salinity to rise and fall, the researchers attribute the immediate cause for the decline to changes in ocean circulation. A large system of circulating currents that deliver freshwater to the region, the sub-polar gyre, appears to be moving faster, propelled by stronger winds tied to the North Atlantic Oscillation climate pattern.

To put the changes in context, salinity fell twice as much in the early 1970s, equivalent to about 10,000 square kilometers of freshwater flooding the North Atlantic, suggesting that a natural cycle is at play. The drop, however, comes as Greenland’s glaciers slide into the sea at a faster rate, and summer sea ice reaches record lows. Researchers haven’t seen freshwater fluxes out of the Arctic Ocean increase much yet, but that could change soon.

“My suspicion is that we might soon see the outflow of fresher Arctic water to increase, which will eventually reach the sub-polar North Atlantic and cause a further decline in salinity,” said Tesdal.

If climate change is causing the ocean freshening trend, that should become clear within the next 10 years, said study coauthor Thomas Haine, an oceanographer at Johns Hopkins University. “Right now it’s ambiguous because of natural variability.”

Oceanographers are keenly interested in the North Atlantic for its role in regulating Earth’s climate and circulating the nutrients that feed marine life, from plankton to predator fish. Its dense, salty waters draw carbon dioxide from the air and send it deep into the ocean. In the process, nutrients mix through the water column, sustaining marine life. If salinity were to drop too far, some of this mixing would stop, reducing the North Atlantic’s carbon dioxide uptake and nutrient cycling which would in turn influence climate and the food web

The study’s other authors are Arnold Gordon, Ryan Abernathey and Joaquim Goes of Lamont-Doherty. Funding was provided by NASA.

Salinity Trends within the Upper Layers of the Subpolar North Atlantic