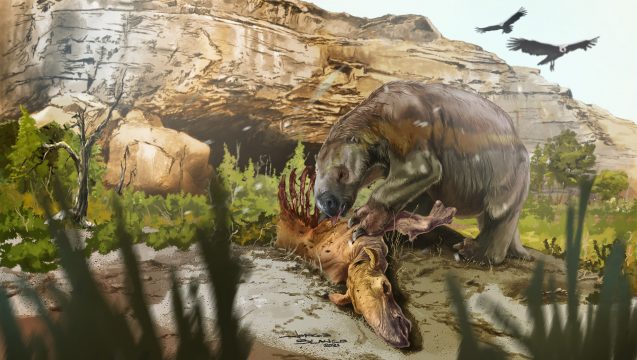 The giant ground sloth Mylodon darwinii feeding on the carcass of the hoofed herbivore Macrauchenia. These extinct mammals roamed parts of high- and mid-latitude South America, as in this scene from about 12,000 years ago, reconstructed in front of the famous Mylodon Cave (Cueva del Milodón) in southern Chile. (Artistic reconstruction: Jorge Blanco)

A new study suggests that Darwin’s ground sloth, which lived in South America until about 10,000 to 12,000 years ago, was not a strict vegetarian, as long assumed. Based on a chemical analysis of ancient sloth hair, researchers uncovered evidence that this gigantic extinct animal was an omnivore, at times eating meat or other animal protein in addition to plant matter. The study was published today in the journal Scientific Reports.

“Whether they were sporadic scavengers or opportunistic consumers of animal protein can’t be determined, [but] we now have strong evidence contradicting the long-standing presumption that all sloths were obligate herbivores,” said lead author Julia Tejada, who did the research as part of her PhD. studies in a joint program at Columbia University’s Lamont-Doherty Earth Observatory and the American Museum of Natural History.

The six living sloth species in Central and South America all are relatively small plant-eating tree dwellers, restricted to tropical forests. But hundreds of fossil sloth species, some as large as elephants, roamed ancient landscapes from Alaska to the southern tip of South America. Darwin’s ground sloth, or Mylodon darwinii, is thought to have weighed between 2,200 and 4,400 pounds, and was nearly 10 feet long. Based on dental characteristics, jaw mechanics, preserved excrement from some very recent fossil species, and the fact that all living sloths eat only plants, Mylodon and its extinct relatives have long been presumed to have been herbivores as well. But these factors could not directly reveal everything about the animals’ diet.

To get a more complete picture, the new study used an innovative approach based on nitrogen isotopes locked into specific amino acids. Found in different proportions in foods, stable nitrogen isotopes are preserved in body tissues, including hair, fingernails, teeth and bones. By first analyzing the amino-acid nitrogen values in a wide range of modern herbivores and omnivores to determine a clear signal, fossils can then be measured to determine the kinds of foods their owners consumed. This allows paleontologists to determine whether they were herbivores, mixed-feeding omnivores, meat-eating carnivores, or specialized marine animal consumers.

“Prior methods relied solely on bulk analyses of nitrogen and complex formulas that have many untested or weakly supported assumptions,” said study coauthor John Flynn, a curator of fossil mammals at the American Museum. “Our analytical approach and results show that many previous conclusions [are] poorly supported at best, or clearly wrong and misleading at worst.”

The researchers used samples from seven living and extinct species of sloths and anteaters (which are closely related to sloths), as well as from a wide range of modern omnivores, from the scientific collections of American Museum and the Yale Peabody Museum. Another extinct species in the study, the North American ground sloth Nothrotheriops shastensis, was determined to be an exclusive herbivore, but the data clearly flagged Mylodon as an omnivore. 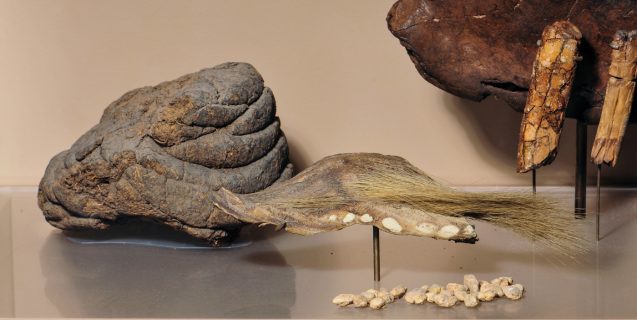 Skin and dung from the extinct giant ground sloth Mylodon darwinii on display at the American Museum of Natural History. (© AMNH/D. Finnin)

Prior research speculated that there were more herbivores than could be supported by the available plants in ancient ecosystems of South America, suggesting that some of those herbivores may have been finding other sources of food. This new study provides compelling evidence supporting that previously untested idea.

“These results [demand] reevaluation of the entire ecological structure of ancient mammalian communities in South America, as sloths represented a major component of these ecosystems across the past 34 million years,” Tejada said.