Scientists have long known that the Cascadia Subduction Zone, under the ocean off western North America, can produce powerful earthquakes and tsunamis. The last great tsunami came in January 1700; the next could come at any time. Now, a team has identified a particular area off Washington and northern Oregon which contains tightly compacted sediments that could be linked to some of these events. The findings, published today in the journal Nature Geoscience, may help scientists understand some of the factors that influence the generation of large earthquakes and tsunamis here and at other danger zones around the world.

“The findings do not tell us when the next earthquake will occur, but they do support the idea that different segments of the Cascadia Subduction Zone are in different states of stress—they’re not all uniform,” said study coauthor Suzanne Carbotte, a marine seismologist at Columbia University’s Lamont-Doherty Earth Observatory. Regardless of where it starts, a large earthquake anywhere along the subduction zone could affect the entire region, which stretches from British Columbia to California.

In a subduction zone, a plate of ocean crust dives or “subducts” beneath an adjoining plate of continental crust. The world’s most powerful earthquakes are produced at the interfaces between the two plates. At some subduction zones, including those off Cascadia, Sumatra and eastern Alaska, thick sediment layers overlie the subducting oceanic crust. Some of this sediment is scraped off during subduction and piled up on the overlying continental plate, forming a wedge of material. The rest of the sediment travels down under the continent with the ocean plate. 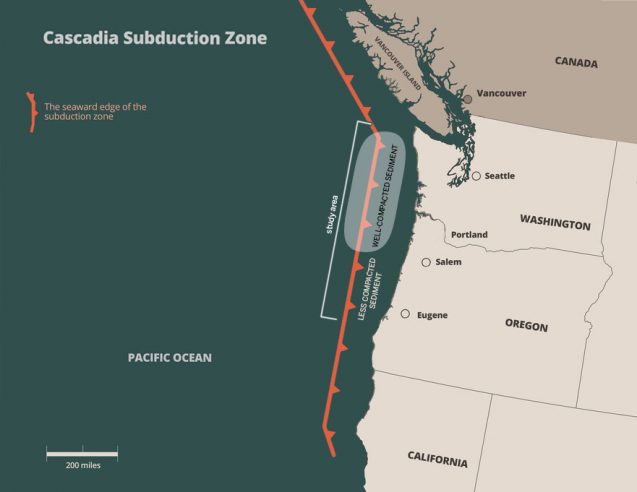 In some regions, the plates tend to slide by each other more or less smoothly. In others, they may get stuck against each other, and build up stress. When stuck areas finally do slip, this creates a big earthquake and, potentially, a tsunami. Scientists believe that in some cases, the course of events can be greatly influenced by the sediment wedge.

To understand how sediments are arranged along Cascadia, the researchers sent powerful pulses of sound from the Lamont-operated vessel R/V Marcus Langseth to the seafloor. By reading the echoes, they were able to produce CAT-scan-like images of the sediment layers up to four vertical miles beneath the seafloor. They combined these readings with measurements from sediment samples previously retrieved from the region through ocean drilling.

The team found that sediments off Washington and northern Oregon are about the same thickness as in other areas, but are more compacted. Here, almost all of the sediments glom on to the continental plate and are built up into a giant wedge where grains are tightly packed, with most of the water squeezed out. This arrangement can make the two plates more prone to sticking and building up stress. The compacted sediments could also boost the ability of an earthquake to trigger a large tsunami, because they lie near the seafloor surface, and would tend to stick together and move as a unit. These factors would in turn boost the wedges’ ability to move massive amounts of overlying seawater and create a tsunami wave at the surface.

“That combination of both storing more stress and the ability for it to propagate farther is important for both generating large earthquakes and for propagating to very shallow depths,” said coauthor Nathan Bangs, of the University of Texas Institute for Geophysics. The propagation of earthquakes into shallow depths causes large tsunamis like the one that followed the magnitude 9 earthquake that struck Tohoku, Japan in 2011.

In contrast, off central Oregon, sediments are less compact, with plenty of water in pore spaces between grains. This tends to prevent the plates from sticking, allowing them to move more frequently and less explosively. Indeed, seismic monitoring suggests that in central Oregon, the two plates are creeping by each other slowly, releasing energy via frequent small earthquakes. Meanwhile, the plates in the region just to the north with the compacted sediments are not producing much if any seismicity, suggesting they are locked together and building stress.

The Cascadia Subduction Zone is believed to generate a large earthquake roughly every 200 to 530 years. The last one, dated to January 1700, created a tsunami that swept the western coast with giant waves, and bounced all the way to Japan, where authorities recorded the event. Scientists expect another large quake to hit in the not-too-distant future, although it is impossible to pinpoint the timing.

The study’s lead author is Shuoshuo Han, a postdoctoral fellow at the University of Texas Institute for Geophysics; Han began the work as a student at Lamont-Doherty. The study was funded by the U.S. National Science Foundation.