One of Largest Icebergs Ever Breaks off Antarctica 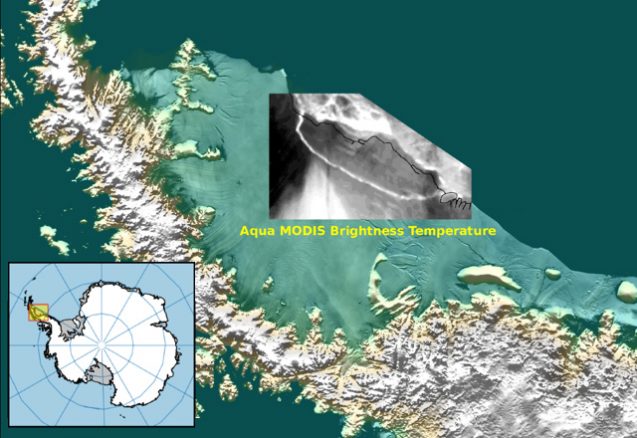 One of the largest icebergs ever, roughly the size of Delaware just broke off Antartica according to scientists who have been observing the area for years. While it’s not unusual for ice shelves to calve, many in the climate community fear that the breaking of Larsen C may be a signal of other events to come.

Luckily relatively little land ice was being held back by Larsen C and as a result it will not contribute to sea level rise. But in other parts of the continent, scientists believe if warming continues, similar breaking of shelves could lead to much larger amounts of ice flowing into the sea. (To learn more, watch tonight’s webcast at 6PM on Sea Level Rise: Causes, Impacts and Options for Solutions.)

Robin Bell, a climate scientist at Columbia University’s Lamont-Doherty Earth Observatory said, “Antarctica is warming and warming faster than anywhere else. This iceberg rolled off the end of an iceberg conveyor belt — the Larsen C. We would worry if the conveyor belt disintegrated.  We have seen two nearby ice shelves disappear. It is important to look at the long term warming trends.”

For Inside Climate News, Jonathan Kingslake, an assistant professor at Columbia University’s Lamont-Doherty Earth Observatory, also raised concerns about the stability of the ice shelf and other Antarctic ice shelves amid changes underway in the region. “More broadly, warming on the Antarctic Peninsula is linked to human activity and probably triggered the collapse of two more northerly ice shelves,” he said.

In an article in Mashable, Bell also said the iceberg should be viewed in the broader context of the changes taking place on our planet.

“It shows that we’re able to watch our planet shift and move much better than we used to, and we know that this is a part of the planet where temperatures are changing more than anywhere else, and [where] the first wakeup call that things could happen fast occurred.”

“It’s really the trends that matter, not an individual iceberg,” Bell said

Read more from Robin Bell and other Columbia University scientists in this New York Times series looking at how ice flows in Antarctica might change the world.