Palm Trees Are Spreading Northward: How Far Will They Go? 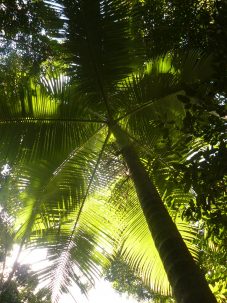 What does it take for palm trees, the unofficial trademark of tropical landscapes, to expand into northern parts of the world that have long been too cold for palm trees to survive? A new study, led by Lamont-Doherty Earth Observatory researcher Tammo Reichgelt, attempts to answer this question. He and his colleagues analyzed a broad dataset to determine global palm tree distribution in relation to temperature.

“In our paper, we draw a fully quantitative line in the sand and ask, ‘How cold is too cold for palms?’” said Reichgelt.

Reichgelt and co-authors David Greenwood from Brandon University and Ph.D. student Christopher West from the University of Saskatchewan launched the study to investigate how plants will redistribute as climate zones shift. This is important for predicting how landscapes and ecosystems will evolve. Palms are particularly interesting to the researchers because they cannot propagate in freezing temperatures.

“Palms are therefore sensitive indicators of changing climates, both in the remote geological past and in the present day,” said Greenwood.

There are signs that palms have already begun flourishing in untraditional settings at higher latitudes. One study found them in the foothills of the Swiss Alps, after a decorative palm escaped cultivation into the mountains; it spread simply because frost is not as prevalent as it used to be.

The new study, published in Nature’s Scientific Reports,
concludes that the absolute limit of palm distribution depends on the average temperature of a region’s coldest month, which has to be above 2 degrees Celsius or 36 degrees Fahrenheit. The findings offer a glimpse into the possible effects of climate change; as climate zones shift northward, plant habitats might, too.

“As an example, this means that at present, Washington DC is just a little too cold (34 degrees F in January) for palms to successfully propagate in the wild, but that you can expect range expansion in the coming decades as average winter temperatures warm up,” said Reichgelt. 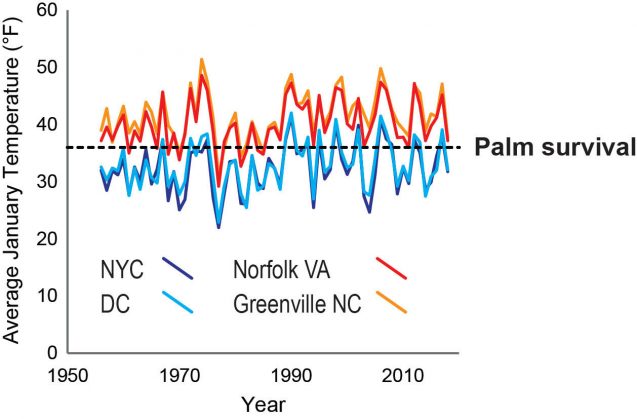 The findings also help retrace Earth’s past climates. The study found that the mere presence of palms in the fossil record indicates that past temperatures remained at or above a minimum possible amount (at least 2 to 5 degrees C).

“A palm tree conjures up images of the tropics,” said Reichgelt. “But palm trees weren’t always confined to the tropical places.”

Furthermore, the researchers found out that the temperature tolerance range of palm trees strongly depends on its evolutionary heritage. The specific palm species and its place on the palm family phylogenetic tree determines its minimum cold tolerance.

“If you find a palm fossil and can determine its affinity to a modern subgroup of the palm family, you can, using our data, determine the temperature of the climate of when that palm was growing,” explained Reichgelt.

In reconstructions past climates, the presence of palms is usually considered indicative of warm, equable climate conditions. Reichgelt says palm fossils have been identified from the Antarctic more than a 50 million years ago and that, among other things, has led researchers to call the Antarctic at that time “near-tropical.”