Pod of the Planet Episode 15: Flying Into the Eye of the Volcano

Pod of the Planet · 15. Flying into the eye of the volcano

In March, Iceland’s Fagradalsfjall volcano woke up from a 6,000-year slumber; soon it was jetting lava fountains as high as 1,200 feet, and sending fiery outflows into nearby valleys. Most people run from volcanic eruptions, but volcanologist Einat Lev decided to get on a plane and get as close as possible. Lev, who works at Columbia University’s Lamont-Doherty Observatory, specializes in analyzing how lava bodies develop and move, and Fagradalsfjall is prime for study: It has a steady, vigorous lava supply, but is not big or explosive enough to be too dangerous. It’s also accessible, a short drive from the capital city of Reykjavik. 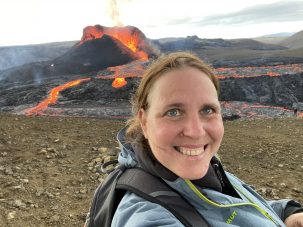 Einat Lev, at the eruption.

In this episode of Pod of the Planet, Earth Institute science news editor Kevin Krajick speaks with Lev about her experiences on the trip, and erupting volcanoes in general. Listeners: Check out the spectacular drone footage she took. You can also see stories and photos from two of her previous expeditions, to the Quizapu Volcano in the high Chilean Andes, and Hawaii’s monstrous Kilauea.

As of this writing, Fagradalsfjall was still erupting. It has not caused any serious damage so far, but if the lava continues spreading, it could cut off the Ring Road, Iceland’s main highway. Stay tuned (Icelandic authorities have a live webcam trained on the volcano).

You can find Pod of the Planet wherever you listen to podcasts, on Apple iTunes, Spotify, Soundcloud, iHeartRadio and Stitcher.