Researchers Map High Levels of Drugs in the Hudson River 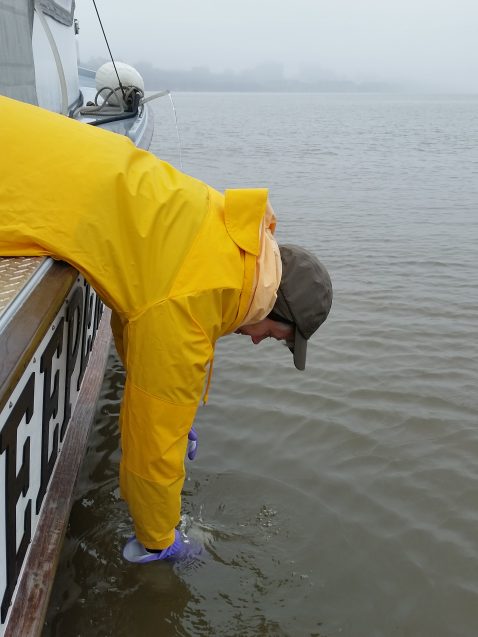 In a new study, researchers have mapped out a stew of discarded pharmaceuticals dissolved throughout the Hudson River. They say that in some places, levels may be high enough to affect aquatic life.  The research appears in the early online edition of the journal Water Research.

This is not the first study to find pharmaceuticals in the Hudson, but it is the first to look at a wide variety, and chart their levels and distribution. In all, the researchers found 16 different pharmaceutical compounds, including antibiotics, drugs for treating high blood pressure, high cholesterol, epilepsy, ulcers and heartburn, and the common aspirin substitute acetaminophen. The medications are believed to enter the river through sewage outfalls after people excrete unmetabolized doses, or when people dump unused pills down the drain. The waters around New York City have high levels, but the researchers found even higher concentrations near more modest municipal outfalls of some upstate municipalities.

“Some levels are high enough that you could be concerned about fish and other aquatic organisms,” said Andrew Juhl, an aquatic biologist at Columbia University’s Lamont-Doherty Earth Observatory who coauthored the study. “Right now, we don’t know what the effects might be. Our point right now is to say these pharmaceuticals are there, and here’s the pattern throughout the river.”

The study was a collaboration among staff at the U.S. Environmental Protection Agency, the regional environmental group Riverkeeper, Lamont-Doherty and Queens College.

Pharmaceutical-related pollution is a well-known phenomenon. Researchers have been documenting the presence of drugs in surface waters in many places for the last 20 years or so. A 1999-2000 study by the U.S. Geological Survey found measureable amounts in 80 percent of water samples taken from 30 states. A 2008 investigation by the Associated Press found medications in the drinking water of some 40 million Americans. Recently, researchers spotted high concentrations of antidepressants in the brains of fish from the Niagara River.

Previous research by Cornell University has found pharmaceuticals in the Hudson, along with industrial compounds. Among other things, in 2013 Juhl and his colleagues also have documented the presence of bacteria resistant to common antibiotics in the river, probably also originating with sewage.

Juhl said the new study is a step toward understanding exactly how pharmaceuticals are distributed, and whether they might affect the river.

In the study, the researchers used Riverkeeper’s vessel to sample 72 sites along the river twice each, in May and July 2016. They started above Troy, where the Mohawk River feeds into the Hudson, and ended off the Battery in New York Harbor, covering about 155 miles. Some samples were taken in waterways connecting to the harbor, including the East River.

Testing for 16 highly prescribed drugs, they found traces of all in multiple places–an average of about half the list in each spot. These included the high-blood-pressure drugs atlenol (brand name Tenamin), diltiazem (Cardizem) and metoprolol (found in Lopressor and Toprol); the anti-ulcer medication ranitidine (Zantac); the anti-cholesterol drug gemfibrozil (Lopil); and carbamazepine (Tegretol), used to treat epilepsy. Acetaminophen, the active ingredient in Tylenol and other products, was widespread.

Different combinations occurred in different places, but overall, the blood-pressure drugs were the most common. The researchers also tested for two common non-medications that would be expected to be found in sewage: caffeine and the artificial sweetener sucralose.  Their levels tended to wax and wane with the presence of pharmaceuticals, strengthening the case that sewage was the source of all the compounds. 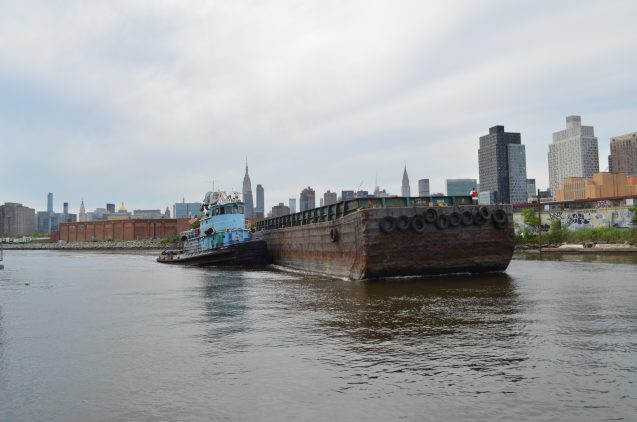 Concentrations were not highest near New York City, as one might expect, but rather near the sewage outfalls of a few upstate municipalities. These included Orangetown and Yonkers, where the researchers consistently spotted some 90 percent of the drugs they tested for. Perhaps the worst was at the sewage outfall for the city of Kingston, some 90 miles upriver from New York City;  here, at least five compounds showed up in potentially worrisome quantities. High levels were also found further upriver, near Troy and Albany. Concentrations of most drugs dropped in less populous reaches of the river, where inflowing creeks presumably diluted the effects of upstream pollution. The team compared their findings with a 2016 federal government survey of 182 U.S. rivers and streams, and found that the detection rate in the Hudson was higher than most. Juhl said this was not a surprise, because the Hudson runs through such a highly populated area.

One interesting spot, said Juhl: the water off the U.S. Military Academy at West Point, which has its own sewage-treatment plant. When the team sampled in May, it found high levels of medications. When they came back in July, levels had dropped by half. One possible explanation: it was summer, and there may have been fewer students and staff around.

The Hudson is a mighty river, made mightier by sewage; Juhl noted that during the months they sampled, some 8 to 11 percent of its freshwater flow above New York City is treated sewage–some 450 million gallons a day. Added to this is sewage flowing in from New York City and environs, at around 1 billion gallons a day. Around the city, the concentration of pollutants is complicated by the intricate shorelines of the harbor and twice-daily tides sloshing back and forth, which may serve to dilute some of the pollution.

The river is far cleaner than it was decades ago, when governments at all levels began massive efforts began to halt the inflow of industrial substances and upgrade urban sewage-treatment plants. But some sewage plants are unable to keep up with their loads, especially during big storms when rainwater overwhelms the systems, and raw sewage ends up getting washed into the river. In any case, sewage plants are not designed to remove or treat pharmaceuticals, nor are they required to. So far, neither the EPA nor other agencies set  standards for the presence of pharmaceuticals in water, largely because no one is sure what levels are safe or not.

In a handful of river-bank communities, some 100,000 people depend on the river for drinking water, but there is no direct evidence that humans are being harmed by floating pharmaceuticals. That said, previous lab experiments by other researchers suggest some drugs could hurt aquatic organisms at the levels that the new study measured. These include the epilepsy drug carbamazepine, which seems toxic to freshwater shrimp; the cholesterol-lowering drug gemfibrozil and the diuretic furosemide, believed to cause DNA damage in some fish; and the blood-pressure drug propranolol, which appears toxic to mussels. Even acetaminophen could interact with other drugs to cause problems, according to one previous study by Italian researchers.

“We don’t know the consequences for aquatic organisms of long-term chronic exposure to any of these substances, or mixtures of them,” said Juhl. “At this point, we now have some basis for concern, but we really don’t know.”