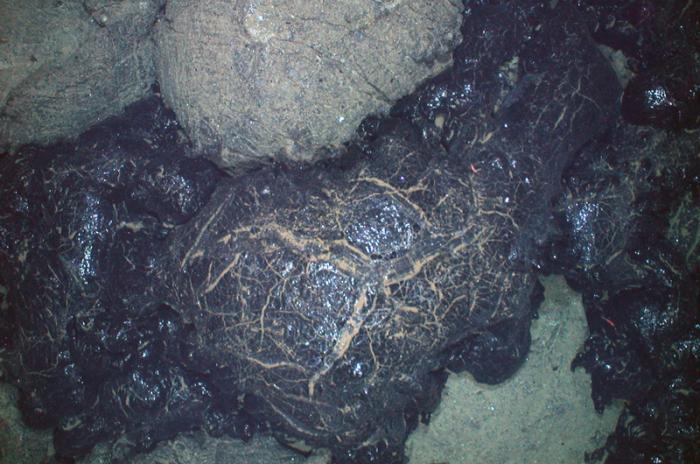 Scientists analyzing a volcanic eruption at a mid-ocean ridge under the Pacific have come up with a somewhat contrarian explanation for what initiated it. Many scientists say undersea volcanism is triggered mainly by upwelling magma that reaches a critical pressure and forces its way up. The new study says the dominant force, at least in this case, was the seafloor itself – basically that it ripped itself open, allowing the lava to spill out. The eruption took place on the East Pacific Rise, some 700 miles off Mexico.

“Mid-ocean ridges are commonly viewed as seafloor volcanoes, operating like volcanoes on land,” said the study’s lead author, Yen Joe Tan, a graduate student at Columbia University’s Lamont-Doherty Earth Observatory. “We’re saying they should actually be viewed as tears in the crust, where magma oozes out.” The study appears in the journal Nature this week.

The mid-ocean ridges are mountain chains that run continuously for more than 40,000 miles along the planet’s seafloors, like stitching on a baseball. From their centers, they pour out lava. This pushes the seafloor out in opposite directions from the ridges toward the continents. In many cases, the leading edge of the seafloor then dives under the land, or subducts, and is subsumed back into the deep earth. This process – the basic mechanism of plate tectonics – was defined in the 1960s and 1970s. Scientists have since debated exactly what drives ridge eruptions.

Many say magma pressure is the main factor, but it might not be the only one. A ridge might also get torn by what specialists call “plate pull” – the force exerted when the distant edge of seafloor subducts under a continent, slowly lugging the rest behind it. Stress might also develop because eruptions build symmetrical chains of mountains on either side of the ridge axis, as lava spills down the sides. This might weaken the center through sheer force of gravity, somewhat like what happens when one slices a hot dog lengthwise, and the two sides fall apart.

In an effort to resolve the relative roles of magma and stress, Tan and his coauthors analyzed an eruption thought to have taken place in 2005-2006, along a heavily studied segment of the East Pacific Rise. A team of researchers had earlier left underwater microphones and sea-bottom seismometers at the site, which recorded the eruption. They later retrieved the sound and seismic data, and mapped the fresh lava using underwater cameras. They also collected samples of the lava, and later analyses of it suggested that the eruption took place over seven to 10 months.

The authors of the new paper took another look after a 2015 eruption at an unconnected study site, at Axial Seamount, off the coast of Oregon.  Unlike the earlier East Pacific Rise eruption, this one was studied in real time with an assortment of instruments. Among the data produced were recordings of violent popping noises that appeared related to the emergence of lava on the seafloor – possibly the result of exploding gas bubbles, or implosions of hardening lava.

In light of the Axial Seamount observations, the researchers reviewed the 2005-2006 data from the East Pacific Rise, and came up with a newly sharpened picture. Their reanalysis suggested that most of the eruption took place rapidly, not over months. Other researchers had already identified a series of conventional earthquakes of about magnitude 2 on Jan. 22, 2006, of the kind usually associated with the rupture of a rock boundary, along a 35-kilometer-long segment of the ridge. About 15 minutes later, the seismometers started picking up clusters of lower-frequency earthquakes, of a type usually associated with rising magma. Another hour or two on, popping sounds like those heard at Axial Seamount appeared, in four separate areas along the segment, each in an area about 5 kilometers long.

The team pinned down the locations of the sounds, and when they overlaid these with the earlier map of the fresh lava, they matched. Their interpretation: the first series of earthquakes signaled the rupture of a fault overlying the magma, with little or no help from magma pressure. Then, with a path now clear, the magma ascended. Magma pressure was probably not the initial trigger for the eruptions, say the authors, because they came simultaneously from four separate places along the apparent ruptured fault.

“It’s been a kind of chicken-and-egg question,” said coauthor Maya Tolstoy, a marine geophysicist at Lamont-Doherty. “You have these two different forces [magma vs. tectonics] that could play a role, and it’s hard to tell which triggers the eruption. Here, we can make the argument for one dominating, because we see this series of events, and then multiple magma chambers erupting at the same time.”

The authors say that according to their observations, about 85 percent of the lava emerged within two days, with remnants dribbling out over the course of a week. The eruptions produced some 22 million cubic meters of seafloor – about enough to cover 13 football fields 1,000 feet deep.

Cynthia Ebinger, a professor at the University of Rochester who studies eruptions at spreading sites both on land and under the ocean, said in an email that very few seafloor eruptions have been so directly observed. The study “adds a new factor to consider,” she said. “It shows that tectonic stresses can trigger large-volume intrusions and eruptions” to create new seafloor.

Michael Perfit, a professor at the University of Florida who also studies undersea eruptions, said the study “tells a remarkable story.” But, he said, the authors may have overstated the relative role of tectonic stress versus magma pressure. “I think it’s really got to be both,” he said. He cited a 2014 geochemical study he coauthored suggesting that the magma was replenished with new material from below about 6 weeks before the eruption. This suggests pressure could have played a more substantial role, he said.

Ebinger said it remained possible that either magma pressure or tectonic forces could be “the straw that breaks the camel’s back” in any specific eruption.

The paper was also coauthored by seismologist Felix Waldhauser of Lamont-Doherty and marine geophysicist William Wilcock of the University of Washington.  The research was supported by the U.S. National Science Foundation.