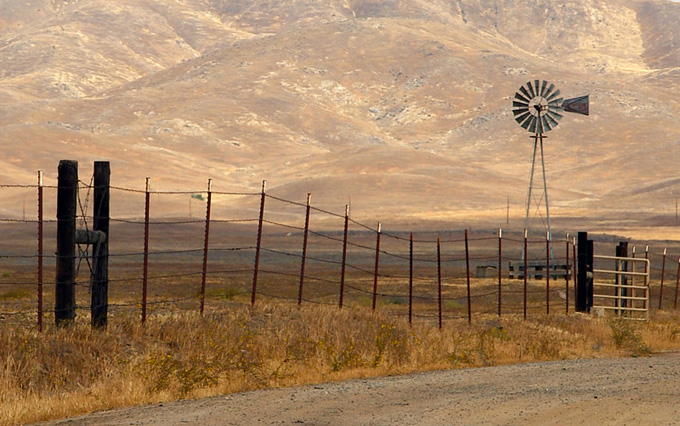 Rising temperatures drive up the risk of a megadrought in the Southwestern United States this century, a new study finds. Photo: Cynthia Mendoza/USDA

As the American Southwest grows hotter, the risk of severe, long-lasting megadroughts rises, passing 90 percent likelihood by the end of the century if greenhouse gas emissions continue at their current pace, a new study says. If we aggressively reduce greenhouse gas emissions, however, we can cut that risk substantially, the authors write.

The findings from scientists at Columbia University’s Lamont-Doherty Earth Observatory, Cornell University and NASA provide new insights into the role temperature plays in megadrought risk and how our choices today can affect water resources in the future.

“By the end of the century, the real controlling influence on megadrought risk will be temperature. That stands out very starkly against precipitation projections that can vary quite a bit,” said study co-author Jason Smerdon, a climate scientist at Columbia University’s Lamont-Doherty Earth Observatory. “What really seems to drive the drying in terms of future projections is the magnitude of the mean temperature increases.”

In an earlier paper, the scientists analyzed several climate models and 2,000 years of climate data from tree ring reconstructions and found a high chance that an extended drought lasting 35 years or longer, a megadrought, would hit the Western or Central United States during the second half of this century if global temperatures continue to rise.

For the new study, published this week in the journal Science Advances, they explored the forces driving that risk, focusing on soil moisture and the relative roles of temperature and precipitation.

The scientists found that even if the Southwest receives more precipitation than it does today, rising temperatures will still push the region’s megadrought risk above 70 percent by the end of the century if the world continues on a high-emissions growth path. That rises to 90 percent if precipitation levels are unchanged. If the Southwest gets less precipitation – a more likely outcome according to most climate models – the megadrought risk rises to 99 percent across most of the region.

The higher temperatures affect moisture balance, taking moisture out of the soil and creating more arid landscapes in a process called evapotranspiration. With higher heat, native plants and trees require more water to keep up.

“A widespread and prolonged drought could really challenge resiliency and the supply practices that water managers have refined over the last century,” said co-author Justin Mankin, a postdoctoral research scientist at Lamont-Doherty Earth Observatory and NASA Goddard Institute for Space Studies. “Given business-as-usual emissions, our results suggest a need to soberly evaluate existing policies for managing Southwestern water demand and its supply to both mitigate the risks of megadroughts and position effective adaptations to their likely occurrence.”

To assess future megadrought risk, the scientists used computer simulations of the Southwest’s climate, soil moisture content, and relative dryness based on temperature and precipitation. They tested what would happen under a wide range of precipitation levels and temperatures that could occur through the second half this century. 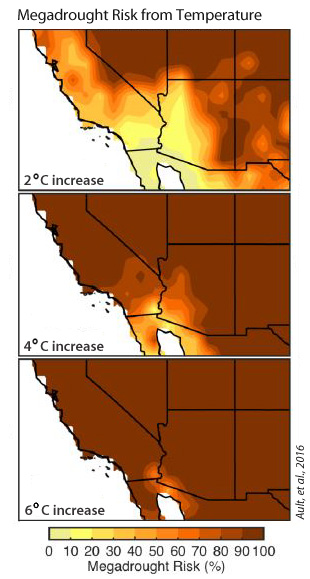 The scientists looked specifically at the impact if the world continues burning fossil fuels on a high-emissions trajectory compared to the impact if we instead shift to more-sustainable, low-emissions growth:

Without global warming, the risk of a megadrought lasting 35 years or more would be less than 10 percent, the scientists say. The last long-running megadroughts in the Southwest were in the 12th and 13th centuries and coincided with the collapse of great Pueblo communities; Chaco Canyon and Mesa Verde were abandoned during those times.

Managing water resources for the future

The Southwest has experienced severe droughts in recent years and the water shortages they create, but those droughts have so far been relatively short-lived. A 35-year megadrought would put unprecedented stress on the region’s water resources, the authors write.

Communities can take adaptation measures, such as shifting to more efficient irrigation techniques, increasing water use efficiency, planning water transfers, or implementing measures to reduce demand. But to know how to manage water resources for the future and prepare, they need to understand each region’s drought risk.

"The trends in the Southwest are disconcerting. By all measures, it is becoming a more arid region, and that is expected to continue. At the same time, we’re putting more agriculture pressures on the region, and it’s one of the most quickly developing regions. Those are competing trends with regard to water supply and demand,” Smerdon said. “It’s probably safe to say that the Southwest, by necessity, will look different because of these trends."

"I wouldn’t ever bet against our ability to, under pressure, come up with solutions and ideas for surmounting these challenges,” Smerdon said, “but the sooner we take this seriously and start planning for it, the more options we will have and the fewer serious risks we'll face.”

Toby Ault, the paper’s lead author and a professor at Cornell University, noted that parts of the normally verdant Northeast are also in drought right now. “This should serve as a cautionary note for areas like the Northeast expecting to see a more-average moisture supply,” he said.

The other co-author of the paper is Benjamin Cook of NASA-GISS and Lamont.