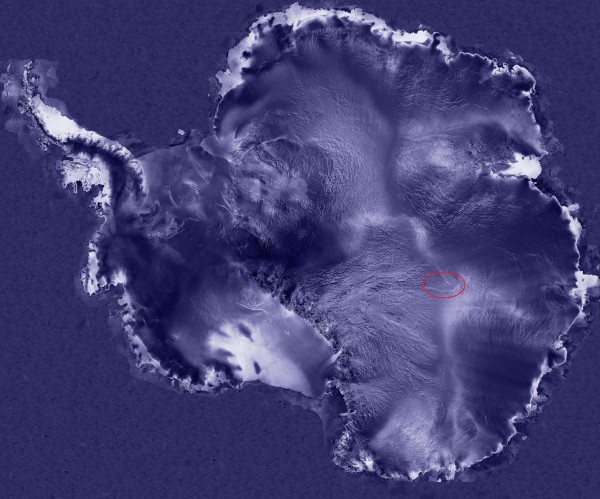 Russian scientists this week finished penetrating more than two miles through the Antarctic ice sheet to Lake Vostok, a huge freshwater lake that has been buried under the ice for millions of years. The feat has taken two decades to accomplish, but the scientists won’t know what they’ve found until next year — the team quickly exited the research station, located in the middle of the continent 800 miles from the South Pole, to avoid increasingly harsh polar conditions.

When the drilling reached the lake, 3,769 meters (12,366 feet) down, water, under great pressure from the ice above it, shot up the bore hole and froze. The Russians say this kept the chemicals used in the drilling process from entering the lake. They will return during the next Antarctic summer to retrieve the sample of frozen lake water.
“It would be the first sampling of a subglacial lake, of the biggest subglacial lake,” said Robin E. Bell, a research professor at Lamont-Doherty Earth Observatory whose work has helped map Vostok and other such lakes under the Antarctic ice. Bell said Vostok was “discovered” by a pilot flying over the area who noticed a distinct flat region on the ice surface – marking the vast lake far below. Bell and colleagues undertook the first systematic survey to determine how much water was in the lake more than a decade ago.

(Bell and others have created
an animated description of Lake Vostok and the overlying ice, on the Earth Institute website.)

An international team of scientists has pulled ice core samples in the area from more than 3,600 meters in depth, offering a detailed environmental record reaching back 400,000 years, covering four complete ice age climate cycles. They found evidence below 3,538 meters that the ice on the lower portion of the sheet consists of water refrozen from Lake Vostok. (Bell and colleagues published
a paper in the journal Nature on the dynamics of ice from the lake refreezing onto the ice sheet in 2002.)
Some believe Vostok, the largest of hundreds of lakes beneath the ice, has been sealed off from the outside world for 15-20 million years or more, and speculate that it may reveal unknown species of microbes and other life forms living in extreme conditions of cold, dark and high pressure. Scientists say samples from the lake could tell us something about how life evolved in the distant past, perhaps back hundreds of millions of years. The lake also could open a window onto conditions existing on less hospitable places around the solar system, such as on Mars or Jupiter’s moon Europa.
“It’s like exploring another planet, except this one is ours,” Bell told AP.

While the initial contact reportedly avoided contaminating the lake with the lubricants and antifreeze that were used to push down through the ice, Bell says the project will remain controversial. The Russians plan to continue probing into the lake, possibly inserting a remote-controlled vehicle.

The Russian Vostok Station sits above the lake in the coldest spot in the world, where the temperature has been recorded at -129°F.
Former Lamont scientist Michael Studinger, now with NASA, put together
a slide show of images from Lake Vostok.
Bell said the project does not bear on her own current research, which focuses on the dynamics of the ice. “I decided I didn’t care about microbes,” she said. She has mapped and studied
the Gamburtsev Mountains, a range the size of the Alps buried under ice in another part of East Antarctica, and wrote last year about the process of
water refreezing there onto the bottom of the ice sheet. Bell and others at Lamont are involved with NASA’s IceBridge, an aerial survey of ice at both poles. “We’re looking at the interaction of water and ice all the time,” Bell said. “Right now we’re looking at where the water is in Greenland.”
For more on Antarctic science:
Images of Lake Vostok from the NASA-Goddard Space Flight Center’s scientific images gallery.
The final report from
a 1998 workshop on Lake Vostok convened by Bell and David M. Karl of the University of Hawaii contains lots of information about related research and the questions scientists are seeking to answer.

NASA researchers recently completed the first map of ice speed and direction in Antarctica.
The home page for the IceBridge program, an airborne survey of polar ice. The program was created to fill a gap in data collection left when a satellite stopped collecting data in 2009, until a new satellite can be put into service in 2016.

The IceBridge program discovered
a massive crack in the Pine Island Glacier, which scientists now say is about to drop a hunk of ice larger than all of New York City into the ocean.

Lamont researchers who traveled to Antarctica with the IceBridge program last year
created a blog about their work.

The Lake Vostok story has been widely reported in news media. You can find full stories at
The Associated Press and
The New York Times. Here are some other media reports: