After years of preparation, scientists are about to ascend Indonesia’s 4,884-meter (16,000-foot) Puncak Jaya, earth’s highest mountain between the Andes and the Himalayas, to drill samples of some of the last, fast-dwindling glacial ice in the tropics. From deep cores representing centuries of accumulation, they hope to extract clues to past cyclic swings in the monsoon rains that feed billions of people across Asia, and to understand how future climate change may act on the system. The expedition, which must deal with extreme weather and altitude, is being led by alpine glaciologist Lonnie Thompson of Ohio State University and Indonesian oceanographer Dwi Susanto of Columbia University’s Lamont-Doherty Earth Observatory, in cooperation with Indonesia’s Meteorological, Climatological and Geophysical Agency (BMKG). (Follow the expedition blog.)

Almost all the world’s high-mountain glaciers are now melting. Aside from being visible symbols of warming climate, these ice masses are built of year-by-year layers of precipitation, containing isotopes that signal past temperatures and rainfall patterns; they may also hold gas bubbles, soot, pollen and other substances that record ecological and atmospheric changes. From these irreplaceable archives, scientists are learning how past natural cycles have worked, and they are now trying to tease out how manmade climate change might affect natural cycles. The main force recorded by Puncak Jaya—which also holds the record as highest island peak in the world--is the El Niño-Southern Oscillation, the cyclic warming and cooling of the Pacific Ocean surface that in turn drives seasonal rainfalls over Asia and South America and possibly beyond. Many scientists are investigating whether warming climate could intensify or weaken ENSO’s effect, bringing droughts or floods that could affect half the world’s population; the scientists believe the ice here may help them figure out the puzzle. Puncak Jaya is the only place left in this part of the world where this record may be read from ice cores, and one of the few remaining tropical ice patches anywhere. (The others are on Kenya’s Mt. Kilimanjaro, and in the Peruvian Andes.) Puncak Jaya has lost about 80 percent of its ice since 1936—two thirds of that since 1972/73. It is now down to about two square kilometers, or less than a square mile; neighboring Meren glacier disappeared completely in 2002.

Thompson is the world leader in recovering alpine glacial ice--he has spearheaded over 50 expeditions to core glaciers in 15 nations from Peru to China, most famously, on Kilimanjaro—but he says Indonesia remains an unexplored missing link. “This is a unique site,” he said Thompson. “It’s also in the center of action of a huge climate system that has far-reaching effects. One way to think about how it might work in the future is to understand how it has behaved in the past.” Susanto has spent most of his career at sea level, on research vessels, and has never scaled a tall mountain, but he is interested in the same system. Up to now, he has focused on studying how ENSO affects the gigantic, highly changeable flow of Pacific waters through the torturous straits formed by Indonesia’s 17,000 islands into the Indian Ocean, and how this in turn links to changing climate. Studies by Susanto and others using instruments anchored to the seabed have shown that during the cold, or La Niña phase of ENSO, the so-called Indonesian throughflow may increase 10 times over; this in turn may affect weather in the Indian Ocean. “When the Pacific gets warmer, Indonesia gets drought. We worry also about the intensity of storms and floods that are the other part of the cycle,” he said. With so much ice gone already, Thompson calls this a “salvage expedition.” He and Susanto estimate that the remaining ice capping the mountain may be 30 to 40 meters thick. Some ice records, like that on Kilimanjaro, go back over 10,000 years, but the scientists are unsure what they will get here. In any case, they are eager to get something before the layers melt into each other, or the ice disappears altogether. “Time is critical,” said BMKG scientist Dodo Gunawan, a member of the team. 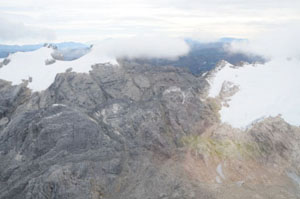 Four-fifths of the ice near the peak of Indonesia’s Puncak Jaya has disappeared in the last 70 years. Photo taken Aug. 27, 2008 from a helicopter by expedition co-leader Dwi Susanto.

The mountain, also known as Mount Carstensz, lies in a remote western part of the island of New Guinea, about 100 kilometers from the nearest town with air service. The researchers are getting logistical support from the Freeport-McMoRan company, which runs a huge copper and gold mine on a nearby peak. They need to get about four tons of equipment onto the ice amid near-constant rainfall and snow, and fog that shrouds the mountain most of the time (and which may be helping preserve the ice). If pilots can make it in, a Freeport helicopter will sling in equipment and supplies; but if the weather does not cooperate, the researchers will have to get themselves and the equipment up by foot, at elevations where oxygen is thin and normal movement is a challenge. They plan to drill six 100-millimeter (3.9-inch) cores to bedrock, using a lightweight generator and extendable hollow drill bits. The cores, heavily insulated so they will stay frozen, will be shipped to Ohio State, which has an ice-core storage facility, kept at -30 degrees C. The mountain is in a volcanic region and surrounded by tropical lowlands, so in addition to isotopes recording rainfall and temperature, the cores are expected to contain volcanic ash from past eruptions, soot from wildfires, pollen, plant debris and maybe frozen insects, animals or other surprises that will provide a trove of additional information.  In 1994, an archeological expedition digging in a cave below the ice found human remains. These were dated to about 5,000 years ago, when much of the world was going through a warm spell—a period the researchers hope to gain some insight to. The team, numbering about a dozen, hopes to complete the expedition by late June. Ice from indonesia's Puncak Jaya and Peru’s Hualcán are expected to provide corresponding records of cyclical climate changes over the Pacific Ocean.

Data from the project will be added to cores drilled last year by Thompson from Peru’s 6,100-meter (20,000-foot) Nevado Hualcán, on the opposite side of the Pacific, and the ENSO system. Peru often gets droughts when Indonesia gets wet weather, and vice versa, so records from both sides are expected to be a boon to climate research. The research links closely to ongoing studies of tree rings, cave formations, corals and other “proxies” that record past climate changes. Last month, some of Susanto’s colleagues at Lamont published a 1,000-year Asian Drought Atlas based largely on tree rings, suggesting that extremes in the monsoon, bringing either droughts or floods, may have helped overthrow powerful civilizations of the past. “The climate system is a very interconnected system,” said Thompson. “If we are going to understand it, we have to understand the ocean and the atmosphere. And that will help us put together a history of how climate changes have affected the land in that part of the world.”

In addition to the collaborating institutions and Freeport, the project has been funded by the U.S. National Science Foundation.