Scientists Say Many Plants Don't Respond to Warming as Thought 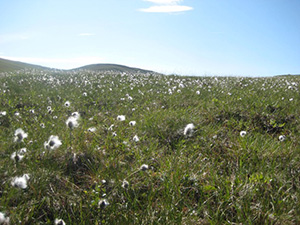 Cotton grass flowers on the tundra of northern Alaska. These and other cold-region plants do not respond as steadily to increasing heat as previously thought, according to a new study. (Kevin Griffin/Lamont-Doherty Earth Observatory)

Plants, like people, breathe, and when it gets hotter, they breathe harder. One product of respiration is the greenhouse gas carbon dioxide. Thus, researchers predict that as the planet is warmed by human-produced CO2, plants may add to the emissions, and amplify the warming. Now, the most comprehensive global study of its kind yet suggests that this effect has limits, and that increases in plant respiration may not be as big as previously estimated. It shows that rates of increase slow in an easily predictable way as temperatures mount, in every region of earth, from tropics to tundra. The newly defined curve leads to sharply reduced estimates of respiration, especially in the coldest regions.

On the most basic level, the study suggests that all plant life has the same internal temperature controls. It looks at respiration on daily to seasonal levels and does not directly address long-term climate change, but it does suggest that plant respiration may not feed back into global warming quite as much as feared. The study appears online today in the Proceedings of the National Academy of Sciences. 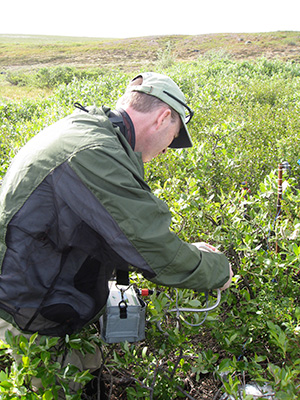 The cells of living creatures must respire in order to build tissues and carry out basic metabolic processes. Plants take in vast amounts of carbon from the air during photosynthesis, but they also breathe much of it out in respiration. Worldwide, plants are believed to respire about 60 billion tons of CO2 each year—about six times what humans produce through burning of fossil fuels. Scientists have long known that plants respire faster when it gets hotter, and there are some fears that if global temperatures get high enough, they will become less efficient, and respiration will outweigh photosynthesis, heightening CO2 in the air.

Up to now, climate models have assumed that as temperature doubles, so does plant respiration, whether on daily, seasonal or longer timeframes. The authors confirmed that short-term speedups with higher temperature take place everywhere—but that the rate of increase slows along a simple, predictable curve as temperatures mount. Setting up instruments in the field and subjecting leaves to rising temperatures over half-hour spans, they measured plant responses in 231 species, from herbs and grasses to shrubs and trees. Study areas included Alaskan tundra; boreal forests in Minnesota and Sweden; temperate forest in New York’s Hudson Valley; tropical areas in Peru, Costa Rica and French Guiana; and savannahs in Texas and Australia. These far-flung regions have widely differing growing-season temperatures, ranging from a mean of 8 degrees C (42 F) in Alaska to 28 C (82 F) in parts of Australia.

“What we thought was a steep curve in some places is actually a little gentler,” said coauthor Kevin Griffin, a plant physiologist at Columbia University’s Lamont-Doherty Earth Observatory. “With this new model, we predict that some ecosystems are releasing a lot less CO2 through leaf respiration than we previously thought.” The biggest changes in estimates are in the coldest regions, which recently have seen warming far beyond that in temperate zones. “All of this adds up to a significant amount of carbon, so we think it’s worth paying attention to,” said Griffin. 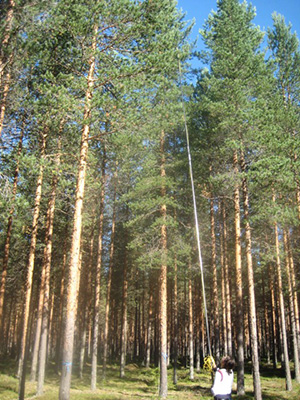 The scientists found that in colder regions, plants wake up quickly as things warm, and respire more at lower temperatures than their counterparts in hotter ones. However, this response dampens relatively quickly, compared to the plants in hotter areas. In other words, plants living in cold places are already working hard to begin with, and won’t work too much harder after a certain point. The researchers assembled new estimates of temperature-respiration relationships that differ from current models. On the North Slope of Alaska the estimates of increase with temperature are 28 percent lower than in the now common model. In Black Rock Forest, north of New York City, they are about 15 percent lower. Griffin led the field research at both of those sites.

“The findings of this study have important consequences for estimating carbon storage in vegetation, and for predicting concentrations of atmospheric carbon dioxide and future surface temperatures,” said lead author Mary Heskel, of Massachusetts’ Marine Biological Laboratory. The study follows a related paper last week in the journal Nature, in which researchers did try to more directly address the question of long-term warming; they found that trees in Minnesota subjected to rising heat over several years become acclimated, and cut down their rate of respiration increase. 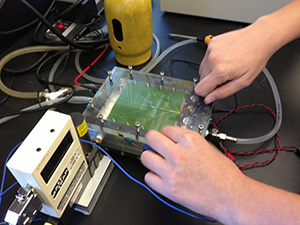 A custom-built instrument measures the rate at which a detached leaf respires as temperature is increased.  (Kevin Griffin/Lamont-Doherty Earth Observatory)

The new study’s simple global curve points to universal internal controls that span all the world’s plant life, said study leader Owen Atkin, a plant biologist at Australian National University and an adjunct at Lamont-Doherty.  “Amazingly, these patterns were remarkably uniform across all the habitats and plant types,” he said.

Griffin cautioned that the findings do not necessarily mean that revised climate models based on the new data will project less warming in the future. The planetary carbon cycle is vast and complex, with gases constantly moving in and out not only through plants, but soils, permafrost, lakes, oceans, volcanoes and human activities. Environmental changes that decrease CO2 release from one system may ramp it up in another. For instance, another study out last week in the journal Climate Change Responses suggests that warmer, wetter conditions in the arctic are hastening decomposition of tundra soils and permafrost, and thus releasing carbon stored there.

“We now have a better way to estimate one process, but it’s only one process,” said Griffin. “The whole system is quite complicated, and a small change in the balance between one part and another could produce a really big result. That’s the challenge we face when we think about the earth as a whole.”