Many giant shelves of ice hanging off Antarctica into the Southern Ocean are now melting rapidly. But up to now, it has been a mystery why much of the resulting fresh water ends up in the depths instead of floating above saltier, denser ocean waters. Scientists working along one major ice shelf believe they have found the answer: earth’s rotation is pushing meltwater sideways as it bleed off the ice, preventing it from reaching the surface. The finding has implications for how ocean circulation may affect the planet’s future climate. The research was published this week in the journal Nature.

Coauthor Pierre Dutrieux of Lamont-Doherty, said, “The vertical distribution of meltwater influences many global-scale processes, from the redistribution of heat around the globe, to its interactions with the atmosphere and the ecosystem.” He said that while the process has been demonstrated in only one location, indirect observations suggest that it may be widespread. Dutrieux emailed his comments from a Korean research ship off West Antarctica’s Terra Nova Bay, where he and colleagues are conducting related research. 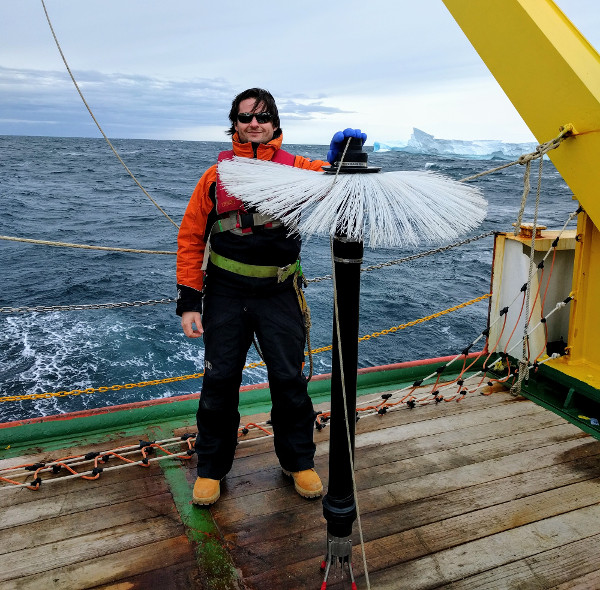 Lead author Alberto Naveira Garabato of the United Kingdom’s University of Southampton said the study is “an important step in understanding how the meltwater mixes in the ocean, and will help with the design of climate models, which largely assume meltwater is only present on the surface.”

The researchers made their discovery during a 2014 expedition on the British Antarctic Survey’s research ship James Clark Ross. An instrument called a Vertical Microstructure Profiler—a kind of giant toilet brush that measures subtle fluctuations in the water–detected turbulence amid meltwater as it flowed out of a cave beneath the Pine Island Glacier, one of Antarctica’s fastest melting glaciers. The team found that as meltwater tries to rise above the surrounding denser seawater, earth’s rotation causes it to spin quickly around a vertical axis, creating a vortex that ejects meltwater filaments sideways into the surrounding seawater. This hinders the fresh water from reaching the surface, and much of it ends up settling hundreds of meters down.

Scientists believe that the depth at which meltwater enters the ocean can affect global ocean circulation and, in turn, climate. Fresh surface meltwater makes the upper layers of the Southern Ocean lighter. This is thought to slow down the sinking of surface water, and to favor the expansion of Antarctic sea ice. Injecting the same meltwater further down is believed to have the opposite effect, favoring sinking of surface waters and the retreat of Antarctic sea ice.

The potential effects of such processes were taken to the extreme in the 2004 movie The Day After Tomorrow, in which floating meltwater produced by warming climate caused the North Atlantic to freeze over almost instantly, in turn locking much of the United States in ice within days. “While no one expects our climate to change in the space of a few days, like the movie, we do know that fresh water flowing into our seas could dramatically affect sea levels and ocean circulation,” said study coauthor Alexander Forryan of the University of Southampton. “As such, it is vital our models take into account the presence of both surface and deep meltwater to maximize their accuracy.”

The team now hopes to develop a way to represent the process in climate models, so that scientists can better project the potential global impact of melting Antarctic ice.