Searching for Faults from Afar

For our project, the R/V Marcus G. Langseth is towing a 12-kilometer-long hydrophone streamer that records sound reflected from deep below the seafloor, which is helping scientists image the structure of the Cascadia Subduction Zone and megathrust fault. But the streamer isn’t the only way these seismic returns are being recorded.

The streamer records data as a function of the time it takes for sound to travel from the ship’s source down to “reflectors” (geological boundaries that act as mirrors for seismic waves, a type of sound wave) below the seafloor, and back to the hydrophone streamer. As the ship travels along a survey line, the long streamer records sound wave arrivals from different paths, which allows scientists to determine how fast the wave traveled (i.e., seismic velocity or wavespeed) and convert travel times to depth. The streamer data work well for determining wavespeeds and depths when the target depth is much shorter than the streamer, but accurately modeling wavespeeds at deeper crustal and upper mantle depths requires recording the seismic energy at distances of up to hundreds of kilometers. These very long distances have two main benefits: they enable recording of reflections from an even greater range of angles than the streamer alone, and they allow for recording of refractions from deep in the Earth.

Raypaths from a single sound source point (red star) to a towed hydrophone streamer (yellow line), ocean bottom seismographs (yellow triangles), and land seismographs (white circles) through a simple theoretical model of the Cascadia Subduction Zone. As the R/V Langseth moves along its survey lines, seismic waves are recorded from many different and crossing raypaths like these, which scientists will use to add detail and accuracy to the wavespeed model. (Illustration: Nathan Miller/USGS)

Refracted energy travels horizontally in the Earth and these “raypaths” will be used to model the wavespeed structure of the subducting Juan de Fuca Plate and the overriding North American Plate. Since it is impractical to tow a streamer measuring hundreds of kilometers, we use stationary seismographs on land and on the seafloor to record seismic arrivals at these very long distances.

Stationary seismographs have another important benefit: the ability to record shear waves. Seismic energy travels through the Earth as both pressure waves (sound waves or P-waves) and shear waves (S-waves), but S-waves are especially useful in measuring mechanical properties in sediments and fault zones. S-waves do not propagate through water, so the Langseth’s streamer cannot directly record them, but the stationary seismographs can.

The stationary sensors are set to record seismic waves from the Langseth’s sound pulses along a survey line. This geometry results in recordings of energy traveling in opposite directions and along crossing paths. Using a method called seismic tomography, which is similar to a medical CAT scan (the “T” in “CAT” stands for tomography), these long-distance data will be used to reconstruct P- and S-wavespeed images of the deep subsurface structure of the Cascadia Subduction Zone.

Offshore, we record long-offsets and S-waves by placing seismographs on the seafloor. Right before the Langseth expedition started, our team from the U.S. Ocean Bottom Seismic Instrument Center (OBSIC) and the U.S. Geological Survey (USGS) deployed ocean bottom seismometers off the coast of Oregon. These instruments consist of sensors (geophones and a hydrophone), battery and recording packages, floatation for buoyancy, and a weight. Once the ship is on the pre-determined launch location, the instrument is deployed overboard and sinks to the seafloor due to the weight at its base. Later, after the Langseth tows its sound source over these instruments, a second team on R/V Oceanus, a research vessel operated by Oregon State University, recovers the ocean bottom seismometers and then redeploys them along lines further north, offshore Washington and Vancouver Island. Oceanus is now waiting for the Langseth to finish towing along these lines before recovering all the ocean bottom seismometers one last time. 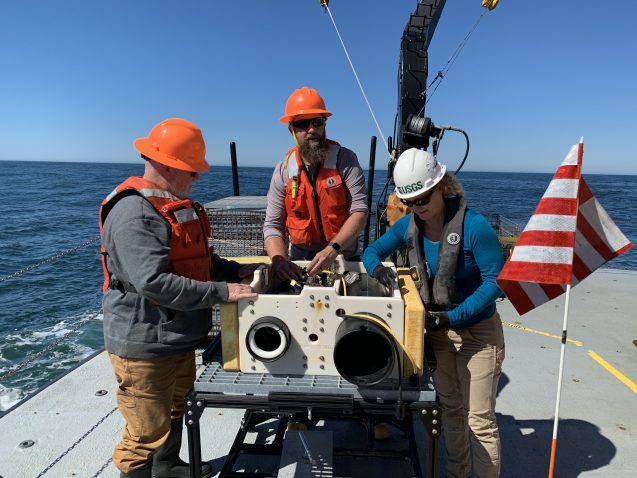 To recover an ocean bottom seismometer, the ship returns to the launch location and sends a code to the ocean bottom seismometer via an acoustic pinger. Once the seismometer receives the code, it releases its weight, becoming positively buoyant, and rises to the surface. The team on the ship must then find the instrument on the ocean’s surface and bring it back safely onboard. This task is aided by several means: a directional radio transmitter and visual markers such as bright yellow/orange coloring, a flag, and a flashing light that helps at night. Despite all this, it is an acquired skill to spot the small instruments in the vastness of the open ocean, particularly in rough seas and bad weather. The OBSIC engineers, science party, and crew of Oceanus have conducted this type of operation hundreds of times in the past; they are a skilled team! 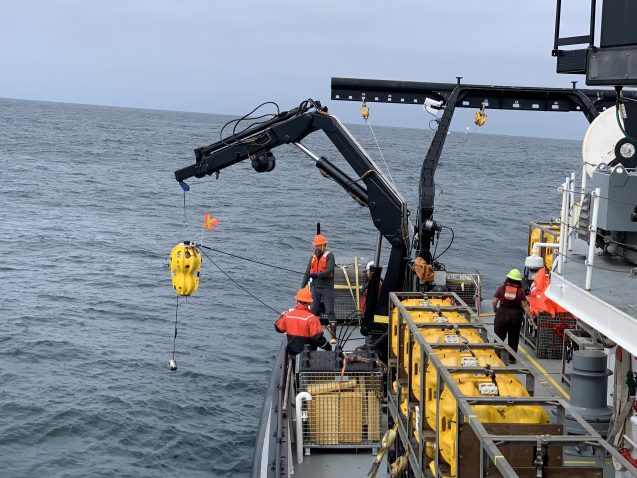 Recovery of an ocean bottom seismometer while others await redeployment on deck. (Photo: Nathan Miller/USGS)

Onshore, another team led by scientists from Oregon State University, the University of Oregon, the South Dakota School of Mines and Technology, and the USGS Earthquake Hazards Program has been busy deploying and recovering hundreds of temporary seismographs. Nearly 30 volunteers, including undergraduates, graduate students and community college students and instructors, fanned out through the Coast Ranges of Oregon and southwest Washington in 15 vehicles to install the seismometers along six lines in a grid of instruments to image the seafloor structure in 3D. Like the ocean bottom seismometers, these instruments record seismic energy from the Langseth’s sound source, but from paths that extend farther east and reach even deeper into the subduction zone before traveling hundreds of kilometers back to the surface onshore. These data are needed to image onshore sections of the subduction zone and the subducting slab where it is deeper than about 10 to 15 km. They also record local and regional earthquakes and background seismic noise, which will provide input data for a wide range of imaging techniques. Importantly, these data provide key measurements of how near-surface sediments and rocks will respond to strong shaking during large megathrust earthquakes. Those measurements are an important part of USGS earthquake simulations and seismic hazard models, which guide building codes and emergency response planning.

Deployment of a temporary seismograph on land. (Photos: Lexi Arlen)

Ground motion during large megathrust earthquakes is also a concern offshore. Rapid movement of the seafloor during earthquakes displaces water, causing tsunamis. Seafloor displacement is more likely to occur if shallow faults connect the megathrust fault to the seafloor, and how likely these shallow faults are to slip during megathrust earthquakes depends on their structure and mechanical properties. During 2018 and 2019, USGS scientists collected detailed seismic reflection imagery along many of the same tracks Langseth is surveying now. Combining those high-resolution data with Langseth’s new images of deeper structures and measurements of mechanical properties in and around fault zones from the new ocean bottom seismometer data will give scientists the comprehensive view of shallow faults they need to model seafloor displacement during megathrust earthquakes.

Shaking by earthquakes can also cause slope failure (e.g., submarine landslides), which in turn can trigger fast-moving turbidity flows that deposit distinct deposits called turbidites when those flows come to rest in the deep sea. If large enough, submarine landslides can also cause tsunamis or damage seafloor infrastructure like communication cables. Sediment cores taken from the seafloor in Cascadia contain many turbidites, some of which have been attributed to past large megathrust earthquakes. Understanding how susceptible the seafloor is to strong shaking and linking past records of slope failure to earthquakes requires measuring mechanical properties of the seafloor. The ocean bottom seismometers’ ability to record S-waves traveling through seafloor sediments is especially useful for this problem.

This big, multi-component experiment requires close coordination between the Langseth, Oceanus, and land-based teams. Likewise, analyzing all the different types of data and integrating results into a coherent understanding of geologic processes and hazards in the Cascadia Subduction Zone will require the work of many scientists from many institutions for many months and years to come.

Nathan Miller is a research geophysicist at the USGS in Woods Hole.

Pablo Canales is an associate scientist in geology and geophysics at the Woods Hole Oceanographic Institution.

Anne Tréhu is a professor at Oregon State University.