Searching for the Megathrust Fault at Cascadia

We are underway on our nearly six-week-long expedition, traveling along the coast of Oregon to British Columbia to investigate the Cascadia Subduction Zone. This subduction zone has been the site of past “megathrust” earthquakes, which are the largest earthquakes that happen on Earth, but is eerily quiet at present, with little seismicity detected within the Oregon to Washington portion. Scientists believe this lack of seismicity reflects the “locked” state of the megathrust fault at present, with strain quietly accumulating as the Juan de Fuca plate system continues to dive (subduct) beneath North America. All or part of that built-up strain will eventually be released in the next great earthquake.

Little is known about the properties or even the location of the portion of the fault zone that generates the large destructive earthquakes. During our cruise, we are using sound to probe under the seafloor looking for the megathrust fault deep beneath several kilometers of sediments that cover the down-going Juan de Fuca plate. Our survey will be the first-ever seismic imaging study to span almost the entire Cascadia subduction zone. We will be using modern advanced seismic imaging technology to detect and characterize fine-scale structures within the subduction zone to help address a range of scientific questions pertaining to earthquake and tsunami hazards within the Pacific Northwest region.

For our investigation we are making use of Columbia’s R/V Marcus G. Langseth, one of the large global-class research vessels within the U.S. Academic Research Fleet. The Langseth is a unique ship within the research fleet, equipped for advanced seismic imaging, with a high-quality sound source and capable of towing an array of listening devices called hydrophones up to 15 kilometers long behind the ship to listen to the echoes returned from the seafloor and deep below. 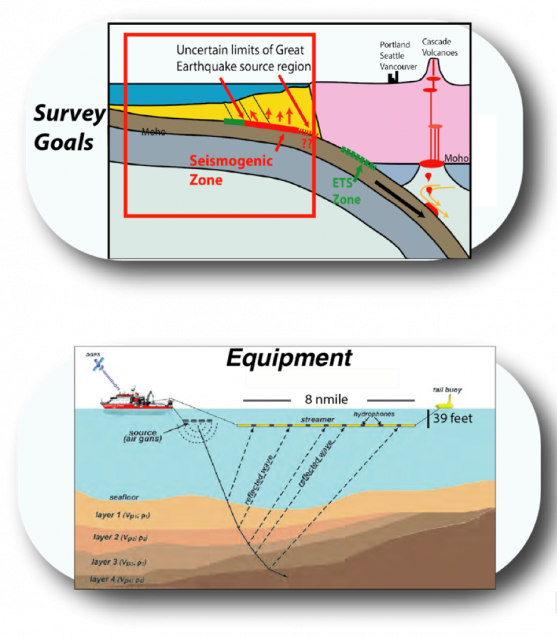 Top: A diagram of the Cascadia Fault, with the Juan de Fuca plate sliding under the North American plate. The red arrows point to the potential areas that may be responsible for the fault’s largest earthquakes. Bottom: A diagram showing the ship’s sound emitters and sound waves bouncing off of different layers below the seafloor. A streamer of hydrophones towed behind the ship listens for these echoes.

We have a terrific team onboard of scientists and students from Columbia, University of Texas Institute for Geophysics, Woods Hole Oceanographic Institution, University of Washington, and Oregon State University/NOAA. We also have expert science technicians who operate the advanced seismic equipment and teach us along the way, marine mammal observers who let us know when marine mammals are nearby so that we don’t bother them with our sound equipment, and the Langseth’s most capable officers and crew who ensure the conduct of our survey and the safe operation of our ship. For most of us this is our first time with a group of people outside our “bubbles” since the pandemic began, and we are thrilled to be together underway on this expedition.