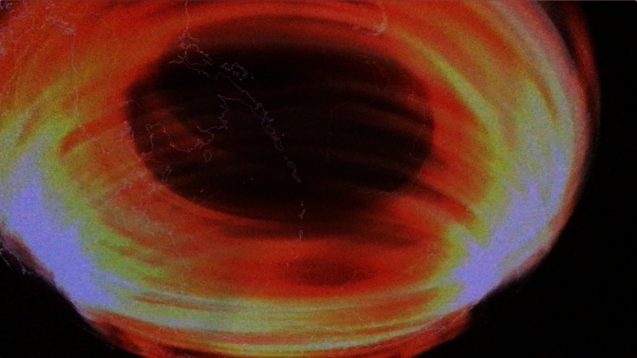 Watching a video of Sumatra’s earthquakes over 7 years, one might watch the blue dots pop up on the screen and think, “Wow, there are a lot of earthquakes there.” But when Ben Holtzman adds sound to the movie, it becomes downright terrifying. After hundreds of thumps indicating smaller earthquakes, a few earth-shattering BOOMs remind you how deadly these ground movements can be.

In the Seismic Sound Lab at Columbia’s Lamont-Doherty Earth Observatory, Holtzman and his colleagues are turning earthquake data into sounds paired with stunning visualizations. During a recent Seismodome show in the planetarium at the American Museum of Natural History, visitors immersed themselves in the visuals and felt the surround sound system’s gut-wrenching, floor-shaking vibrations.

Video: Simulation shows how Japan’s 2011 Tohoku earthquake sent waves rippling back and forth across the world. Here we see how they passed through the U.S. with a view from inside the planet.

When the earth moves, seismometers record those jostlings as a bouncy line on a paper. Those bouncy lines look very much like sound waves—hence, one of the simplest ways that Holtzman and his colleagues turn seismometer data into sound is by playing that waveform in fast-motion. They also tweak it with filters, samples, and waveform reconstructions. In reality, the range of earthquake magnitudes is much larger than the range that the speakers can replicate.

“We have to dynamically compress it, so that it won’t blow up the whole system in here,” said sound designer Jason Candler, joking that, “I know it would be kind of cool to see, but we’d be fired.”

One of the reasons the Seismic Sound Lab does these simulations is to inspire awe and teach people how common and unpredictable earthquakes are. But data sonification can also be useful to scientists.

“There are far, far too many events for your eye to keep track of,” said Holtzman. “The ear is making up for that.”

Each sound in the show can convey multiple layers of information simultaneously, such as earthquake’s strength and depth. And the sounds can reveal patterns—for example, after a big earthquake, there’s a surge in smaller earthquakes. As those aftershocks slow down, the decay pattern gives a characteristic sound, according to Holtzman. The team is working on spacing out the sounds to more thoroughly explore the patterns, and they want to see if it’s possible to hear whether a particular earthquake happened randomly or was caused by another earthquake. “That’s the kind of thing that our ears are very good at,” said Holtzman.

If you missed out on last week’s show, fear not: they’ll be doing another show in the spring. In the meantime, you can watch (and listen to) some related videos on the Seismic Sound Lab website.