Seismologist Won-Young Kim heard the first reports of the Sept. 11, 2001, attacks on the World Trade Center as he drove to his job at Columbia University's Lamont-Doherty Earth Observatory. From his office on the west bank of the Hudson River, 21 miles north of lower Manhattan, Kim runs a network of seismic instruments that monitors the U.S. Northeast for earthquakes. When he got to work, everyone was glued to the radio. Soon, he was inundated by calls from government officials and reporters. In the initial chaos, it was unclear exactly what had hit, and when; had the seismographs picked up anything? 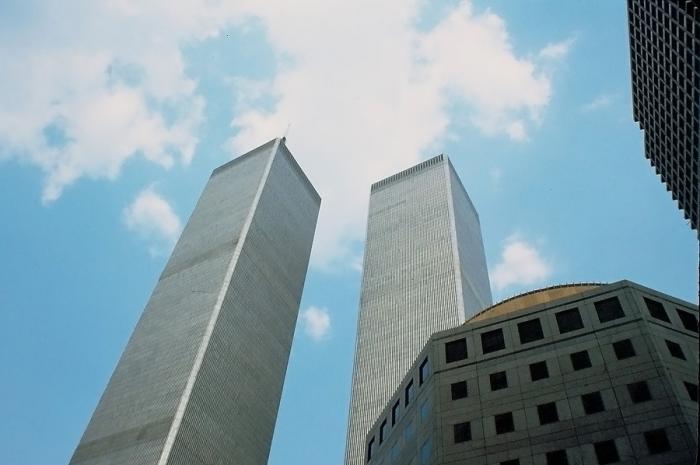 "Up to then, all I knew was, something terrible happened," said Kim. His and others' first impulse had been: Should we go down there and help rescue people? Bring supplies? But aside from the fact that all bridges and tunnels to Manhattan were soon shut down, they realized they could be of more use where they were. "I thought, yes, maybe there is a seismic signal," said Kim. "Maybe we have data to contribute. Maybe we can assist and help pin things down."

Kim and his colleagues soon came up with precise seismic signatures of the plane impacts and building collapses that had been observed by so many eyewitnesses. The analyses helped investigators confidently interpret many details of the attacks and their consequences. They led to corrections in the reported timing of events and fed into the final narrative of the U.S. 9-11 Commission. An image of one of their seismograms is enshrined at Ground Zero in the September 11 Museum.

Kim received his first query, from a New York Times reporter, after the collapse of the first tower. There was no operating seismometer in New York City at that time; the closest was on the Lamont campus itself.

Kim rushed over to the big rotating drum that continuously records its signals on paper. Sure enough, the needle had jumped. Signals also came in electronically from some of the 33 other seismographs scattered across the region. He was in his office trying to work out the exact time and magnitude of the collapse when the second tower came down. From then on, all he did was make calculations, confer with colleagues and try to get a few hours of sleep. He does not recall ever seeing visual images of the plane impacts or building collapses until the following night, when he went home and saw on television what most other people had already seen a hundred times. 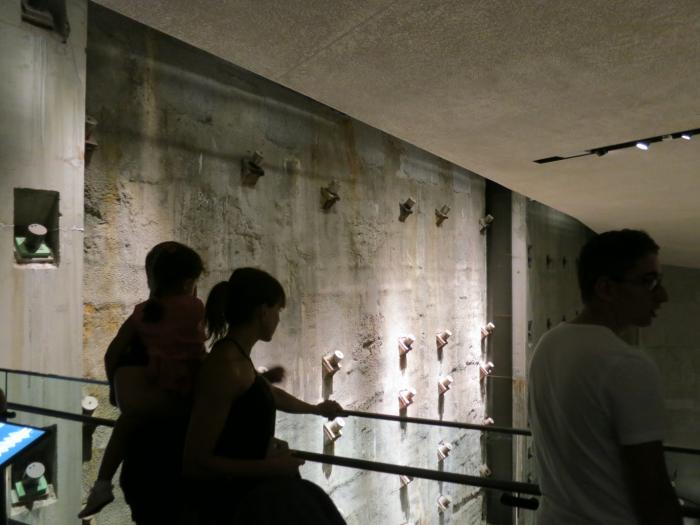 Over succeeding weeks, Kim and his colleagues worked with federal investigators, the New York Fire Department, the Port Authority and others to provide seismic records that could be combined with photos, videos and eyewitness reports. Their first product, coauthored by 12 Lamont seismologists and grad students, was a November 2001 paper published by the American Geophysical Union  describing the waves generated by the attacks, their potential effects, and the precise timing of each event.

The seismologists determined that the planes hit the towers at 8:46:26 and 9:02:54, give or take a few seconds. Their calculated time for the first strike was about 2 minutes earlier than had been reported by media. To make the calculation, they had to account for the 17-some seconds it would have taken for the waves to travel from the shocked towers down through their foundations and then outward through complexes of shallow crustal rocks. First, the hard schist and amphibolite of lower Manhattan; then the gneisses of upper Manhattan; on to the sandstones and shales underlying the Hudson River; and finally up through the great sill of volcanic rock that forms the towering Palisades on the river's west bank, where Lamont sits. Much of the energy also traveled through the river itself.

The jet strikes generated seismic waves comparable to small earthquakes of magnitudes 0.9 and 0.7 respectively—probably only a small part of the total energy of the collisions. Kim believes most of it was released in fireballs and airborne shock waves. The seismic waves looked quite unlike those of natural earthquakes, which originate under the surface, said Kim. These had started from above. "More like ringing a bell," he said. 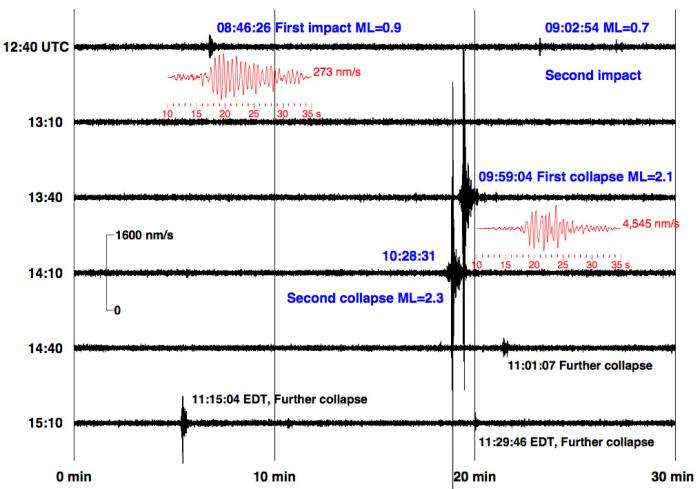 According to the seismic signals, the collapse of the south tower came at 9:59:04 and that of the north tower at 10:28:31. Some federal investigators put the times about 10 seconds earlier, but they apparently measured from when the buildings began pancaking from the top; the seismologists pinpointed when they hit bottom.

The first collapse, of the south tower, generated seismic waves comparable to a magnitude 2.1 earthquake. The fall of the north tower, a half-hour later, generated the most powerful wave—corresponding to a magnitude 2.3 earthquake. This was recorded by 13 seismic stations in five states, including one at Lisbon, N.H., 266 miles away. Again, Kim calculated that most of the energy did not reach the ground as seismic waves; it was mainly used up converting steel, concrete—and human beings—to dust. He said the event greatly resembled the energy released by a pyroclastic flow, a lethal explosion of hot gases and debris running down the slopes of an exploding volcano.

The nearby 7 World Trade Center came down at 5:20:33 pm, and the seismographs picked that up, too. "It was more gradual than the big towers," Kim said. There was some speculation that this building and others nearby were fatally damaged by the earlier strong ground shaking, but the seismic analyses suggested otherwise. Modern New York structures are built to withstand much stronger natural quakes, up to magnitude 4 or 4.5. The seismologists said the weakening of adjacent structures was more likely caused by the sudden air pressure of the volcano-like debris flow, not ground shaking. These findings helped engineers more confidently judge which other still-standing buildings were weakened, and which were not. 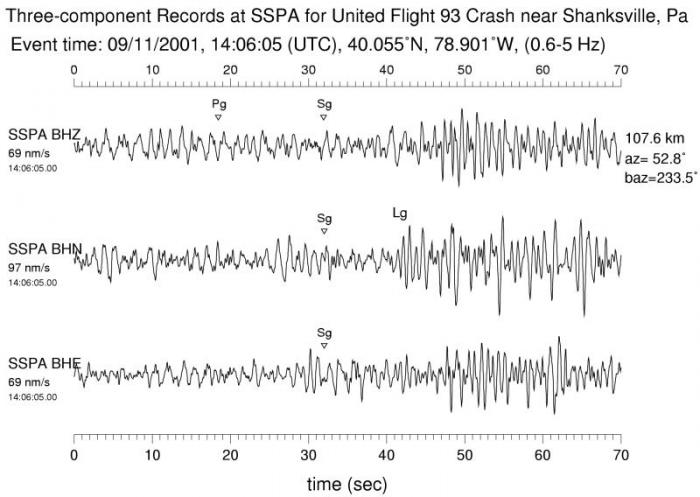 In the days following the attacks, Kim and many others discovered something else: Among the more than 8 million New Yorkers, there are few degrees of separation. Nearly everyone knew someone, or knew someone who knew someone who was missing. "Everyone on my little street, they had a cousin, or a friend," said Kim. "It was very painful." Among them: several former Lamont geophysics students who worked in or near the Trade Center. Highly skilled at analyzing complex data, they had figured out they could make a lot more money crunching stock prices for Wall Street than plotting earthquakes.

One of Kim's former students, a Chinese immigrant named Jing-Hua Shi, could not be reached for three days. Finally, she turned up OK. Another, 41-year-old Weibin Wang, had immigrated from China and studied earthquake mechanics at Lamont. In 1999, he joined the financial firm Cantor Fitzgerald, and in March 2001 became an American citizen. He lived in a suburban house not far from Kim with his wife, Wen Shi, and their three children. On weekends, he cooked for them and took the kids to piano lessons. He was on the 103rd floor of the north tower when the plane struck and was never heard from again.

Some time later, Kim and Gerald Baum of the Maryland Geological Survey tried to help pinpoint the time when the hijacked United Airlines flight 93 slammed into a field near Shanksville, Penn., killing everyone on board. They came up with 10:06 am, but the signals were mixed with too much noise and turned out to be unreliable. Using radio transmissions and other data, the 9-11 Commission put the crash three minutes earlier. Kim could not come up with any signal  from the crash of a Boeing 757 into the Pentagon at 9:37 am. He speculates that the marshy sediments on which much of Washington is built had absorbed the impact. Or, additionally, that the Pentagon is built over a massive labyrinth of reinforced underground spaces that scattered the energy. 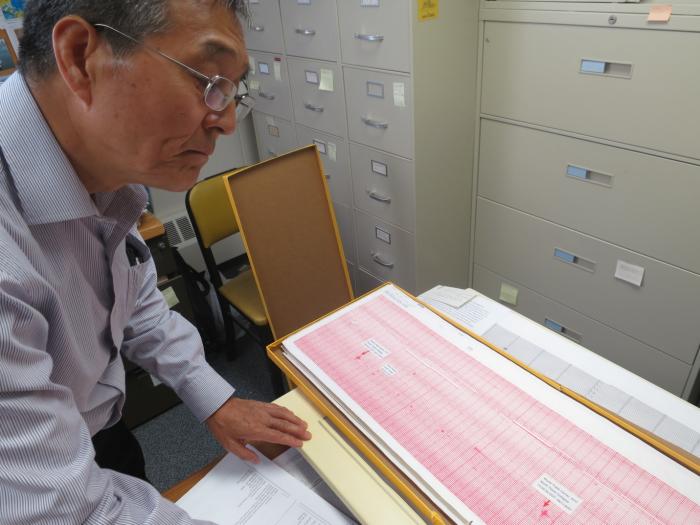 Later, when Kim looked back over the New York City data, something popped out that dumbfounded him. Interspersed around the plane impacts and the fall of the towers were five or six smaller seismic signals. At first he thought they were incremental collapses. But he tracked their locations to a line of sites along a formation of hard rock in northern New Jersey. He had seen these before many times: dynamite blasts at rock quarries. "I was very surprised, they were still doing it that day," he said. "I thought they would have stopped, but they continued."

The events highlighted the fact that New York City did not have a single operating seismic station. This, although Manhattan is underlain by several known faults, has a history of small to moderate earthquakes, and could be subject to much larger ones. In 2002, Kim and his colleagues installed stations in Central Park and at Fordham University in the Bronx. These continue to operate today.

At the time of the attacks, Kim and his family were all still citizens of South Korea, where Kim grew up. Sept. 11 changed this. "It was very hard for me to see my neighbors," he said. "This was very close to me. I knew, this is where I live now." A few months later, he and his family all applied for U.S. citizenship. They were sworn in together as citizens in July 2002.

This was adapted from a longer story, available here.