The Arctic is warming twice as fast as the rest of the planet, and scientists are seeing the effects across ice and ecosystems. The average annual air temperature over Arctic land is now 3.5°C (6.5°F) warmer than it was 1900, Greenland is experiencing longer melting seasons, and this year’s spring snow cover extent set a record low in the North American Arctic, according to the National Oceanic and Atmospheric Administration’s newly released 2016 Arctic Report Card.

Understanding these changes is becoming increasingly important for economic planning and national security in many countries, as well as for the daily lives of people whose communities are directly affected.

Marco Tedesco, a glaciologist at Columbia University’s Lamont-Doherty Earth Observatory and the lead author of the Arctic Report Card chapter on Greenland, described some of the changes he has been seeing in Greenland during a news conference today for the report’s release.

The Greenland Ice sheet, which holds enough water to raise global sea level by an estimated 24 feet, has been losing mass since at least 2002, when satellite measurements of the ice sheet began. Its melting season has also been starting earlier and lasting longer. In 2016, the start of Greenland’s annual summer surface melt was the second earliest in the 37 years that satellites have been observing the ice sheet, Tedesco said.

“The melting season is getting longer, invading spring and fall, and it’s preconditioning the next melting season,” Tedesco said.

In Northeast Greenland, the melting season lasted 30 to 40 days longer this year than the 1979-2016 average, and it was 15 to 20 days longer along the West Coast, he said. That longer melting period can precondition future melting, creating what Tedesco has referred to as “melting cannibalism”. Melting changes the properties of snow and ice when it refreezes, creating larger grains that “darken” the ice surface, allowing it to absorb more radiation when exposed and exacerbate future melting. (Tedesco discusses some of the feedback mechanisms driving melting in Greenland in the video above.)

Warming air is also creating problems in other parts of the Arctic by thawing normally frozen permafrost. That can create structural instabilities for roads and buildings, and it can release carbon dioxide and methane, powerful greenhouse gases. “We estimate the tundra is releasing net carbon to the atmosphere,” Tedesco said.

Permafrost areas hold large stores of organic carbon, equivalent to about twice the amount currently in the atmosphere, according to the Report Card. In a study published two weeks ago, Lamont post-doctoral scientist Francesco Muschitiello and colleagues showed what warming has done to permafrost carbon stores in the past. They presented the first direct physical evidence of a massive release of organic carbon from permafrost during a warming spike at the end of the last glacial period, documenting how Siberian soil that was once locked in permafrost was carried into the Arctic Ocean during the end of the last glacial period at a rate about seven times higher than recent times. 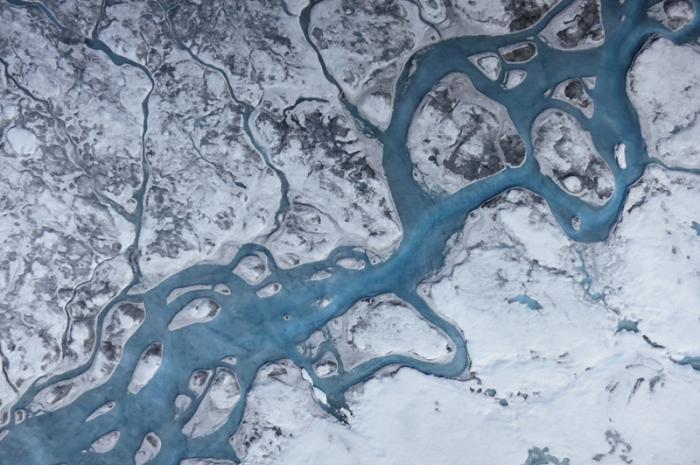 The Arctic Report also describes how Arctic sea ice has also been getting younger and thinner, leaving patches of dark open water that can absorb more solar radiation and warm the water. This summer, Arctic sea ice fell to its second-lowest minimum extent since satellite record keeping began in 1979, and in November it registered a record low for the month, according to the Report Card.

In the Native Village of Kotzebue, just north of the Arctic Circle in Alaska, the predominantly Iñupiaq community relies on the seasonal sea ice and the marine mammals that live on the ice pack, and its members have seen changes in the ice in recent years, including the sea ice forming later and breaking up earlier in the year. The community is now partnering with Lamont oceanographer Christopher Zappa on a research project that will put drones to work studying changes in the changing sea ice and ocean ecosystem. Zappa's team, with support from The Gordon and Betty Moore Foundation, will be using airborne remote sensing technology to study the spring melt process, the ice’s stability, ocean circulation in the area, and marine biological processes.

Lamont scientists are currently studying several areas of the Arctic to increase our understanding of the changes that are underway now and those ahead.

In Alaska's interior, ecologist Natalie Boelman and plant physiologist Kevin Griffin have been working near the tree line, where boreal forest ends and tundra begins. They are part of a team that is combining satellite observations with fieldwork to better understand the affects warming will have on Arctic region’s vegetation and trees, including risks from insect infestations and wildfire.

Joerg Schaefer, Nicolas Young, and William D’Andrea and have been analyzing geochemical changes in Greenland’s bedrock and evidence in sediment from glacier-fed lakes to understand how the region's ice cover responded to warming in the past. Schaefer recently found evidence in bedrock drilled from two miles below the summit of the Greenland Ice Sheet that suggests the ice sheet might not be as stable as believed.

Tedesco and Lamont geophysicists Indrani Das and Robin Bell also led a workshop earlier this year with scientists from around the world to discuss ways to improve understanding of the fundamental processes controlling the surface mass balance of the Greenland Ice Sheet. Tedesco will be presenting details from the workshop at the American Geophysical Union Fall Meeting later this week.

“Rarely have we seen the Arctic show a clearer, stronger or more pronounced signal of persistent warming and its cascading effects on the environment than this year,” said Jeremy Mathis, director of NOAA’s Arctic Research Program. “While the science is becoming clearer, we need to improve and extend sustained observations of the Arctic that can inform sound decisions on environmental health and food security, as well as emerging opportunities for commerce.”