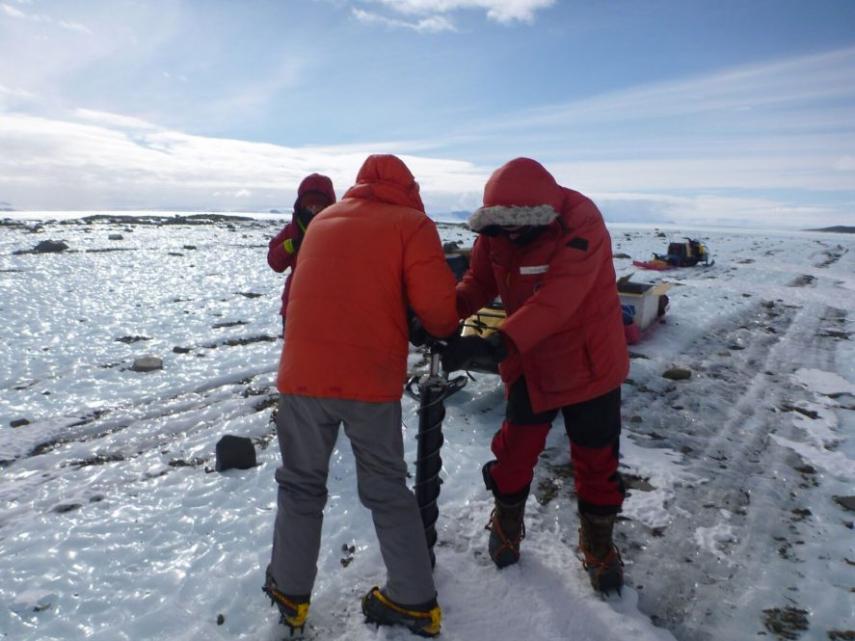 The study’s findings are significant, given that some predict the West Antarctic ice sheet could melt quickly due to global warming.

The team’s research findings are presented in a paper, “Middle to Late Pleistocene stability of the central East Antarctic Ice Sheet at the head of Law Glacier,” that was published yesterday online in the journal Geology. The study was authored by Mike Kaplan, an associate research professor at Lamont-Doherty and Kathy Licht, an associate professor in the Department of Earth Sciences in the School of Science at IUPUI; contributing authors include Gisela Winckler, Joerg Schaefer and Roseanne Schwartz at Lamont-Doherty.

If the East Antarctic ice sheet, which is 10 times larger than the western ice sheet, melted completely, it would cause sea levels worldwide to rise almost 200 feet, according to Licht.

Licht led a research team into the Transarctic Mountains in search of physical evidence that would verify whether a long-standing idea was still true: The East Antarctic ice sheet is stable.

The East Antarctic ice sheet has long been considered relatively stable because most of the ice sheet was thought to rest on bedrock above sea level, making it less susceptible to changes in climate. However, recent studies show widespread water beneath it and higher melt potential from impinging ocean water.

The West Antarctic ice sheet is a marine-based ice sheet that is mostly grounded below sea level, which makes it much more susceptible to changes in sea level and variations in ocean temperature.

“Some people have recently found that the East Antarctic ice sheet isn’t as stable as once thought, particularly near some parts of the coast,” Licht said.

Recent studies have determined that the perimeter of the East Antarctic ice sheet is potentially more sensitive and that the ice may have retreated and advanced much more dynamically than was thought, Licht said.

“We believed this was a good time to look to the interior of the ice sheet. We didn’t really know what had happened there,” Licht said.

The research team found the evidence confirming the stability of the East Antarctic ice sheet at an altitude of 6,200 feet, about 400 miles from the South Pole at the edge of what’s called the polar plateau, a flat, high surface of the ice sheet covering much of East Antarctica.

To understand how an ice sheet changes through time, a continuous historical record of those changes is needed, according to Licht. The team found layers of sediment and rocks that built up over time, recording the flow of the ice sheet and reflecting climate change. Finding that record was a challenge because glaciers moving on land tend to wipe out and cover up previous movements of the glacier, Licht said.

The big question the team wanted to answer was how sensitive the East Antarctic sheet might be to climate change.

“It turns out that our data supports those models,” she said. “It’s nice to have that validation.”

— Adapted from a University of Indiana press release.