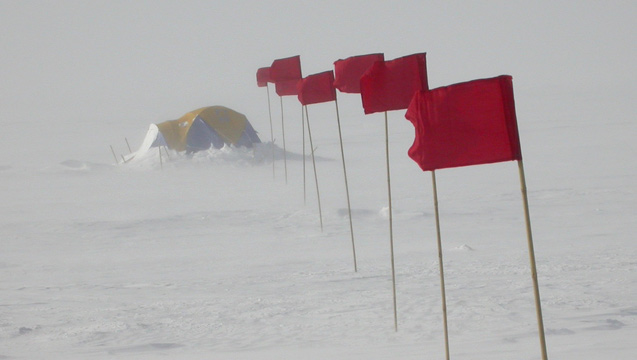 Powerful Antarctic winds strip away an estimated 80 billion tons of snow per year, according to a new study that is helping to update computer models. Photo: Ted Scambos/NSIDC

A new study has found that powerful winds are removing massive amounts of snow from parts of Antarctica, potentially boosting estimates of how much the continent might contribute to sea level. Up to now, scientists had thought that most snow scoured from parts of the continent was simply redeposited elsewhere on the surface. However, the new study shows that in certain parts, called scour zones, some 90 percent—an estimated 80 billion tons per year—is instead being vaporized, and removed altogether. The finding means that scientists must adjust their models of how much mass Antarctica is losing, and how much it might lose in the future. The study appears this week in the journal Geophysical Research Letters.

Wind-scour zones, which cover about 7 percent of Antarctica, occur where winds persistently scrape away at the surface, sometimes for centuries.  The new study documented one area where winds have obliterated as much as 18 meters (more than 50 feet) of snow—equal to 200 years’ accumulation.  The scientists identified thousands of similar sites using satellite imagery. This persistent loss has created pockets where the surface is eroding about as fast as ice flows in. That means the surface retains its shape, but in fact is exporting mass. In the past, warmer climates have brought more snowfall to Antarctica, and this could happen again now, so knowing where all that snow ends up could become increasingly important.

The research was led by Indrani Das, a geophysicist at Columbia University’s Lamont-Doherty Earth Observatory. “We need to get the physics right.” said Das. “The ice surface and the scouring process are tied together with climate.” 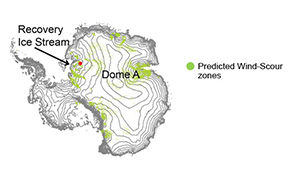 Some 7 percent of Antarctica is covered by wind-scour zones (green) where snow is persistently swept away by high-powered winds. (Das et al.)

As snow falls in Antarctica, it builds up layers on the ice sheet. Researchers can see these layers in radio-echo images and ice-core samples. In East Antarctica, where the researchers did their work, Das noticed irregularities on the radar images: landscapes where snow had accumulated as expected, and then sections where the layers disappeared for a few kilometers, then resumed. These were wind-scour zones, sometimes called “glaze” for their buffed ice surfaces. Das developed an empirical model, described in a 2013 Nature Geoscience paper, that could locate the scour zones. She then used satellite data from earlier research led by glaciologist Ted Scambos of the University of Colorado’s National Snow and Ice Data Center to validate it. In the new study, Das and Scambos, with help from models produced by the University of Utrecht’s Michiel van den Broeke, took the next step to quantify the snow loss and describe the physics involved.

“[We] identified new processes that we didn’t fully appreciate before,” said Scambos.

Scour zones are created by East Antarctica’s persistent katabatic winds. Because the air directly above the ice is colder and denser than warmer layers above, it gets trapped, and accelerates quickly down steep slopes, reaching speeds of up to 25 meters per second (55 miles per hour). With temperatures between minus 20 and minus 80 degrees Celsius (minus 4 and minus 112 Fahrenheit), the snow never melts, but it does sublimate: the winds break up the already brittle snow, causing it to blow away and in many cases evaporate directly from solid to gas.

To determine what was happening at the scour zones, Das needed to know the age of the surrounding snow layers and their density. She used existing dated ice cores from Eastern Antarctica’s Recovery Ice Stream region to identify volcanic ash horizons from the 1815 Mount Tambora eruption in radio-echo profiles of the snow layers. Das could see that in some regions snow layers below the Tambora layer were exposed at the edge of scour zones by the ablation process. Furthermore, radar images revealed that only a small amount of the missing snow from the scour zones was redeposited at the bottom of the slope.

An ice-penetrating radar profile over a wind-scour zone shows how layers in the ice sheet are truncated by the winds. The blue and red lines date volcanic eruptions that are evident in the ice layers. (Indrani Das)

Das estimates that because of the sublimation, climate models have been overestimating surface mass by more than 80 billion tons per year. “This impacts the surface snow-accumulation estimates of most major glaciers and ice streams of East Antarctica,” said Das.  “There is this huge misconception that everything removed from scour zones is redeposited.”

“What we're seeing is that East Antarctica – already among the driest regions on earth – is a bit drier than we thought, said Scambos. “It’s more likely that it is losing ice, and adding to sea level.”

In most of Antarctica, climate models are close to matching satellite and radar data, but they miss the snow loss in the scour zones because it occurs on a relatively small scale. Nevertheless, “the surface area and volume of the East Antarctic ice sheet are greater than all the other ice bodies combined,” said van den Broeke. “Assessing its mass balance is therefore of the utmost importance.”

The climate modelers involved in the study are now planning to greatly increase the resolution of their model .  They expect the next model update in 2016.

Das and Scambos worked with coauthors Lora Koenig of the National Snow and Ice Data Center, and Michiel van den Broeke and Jan Lenaerts of the Institute for Marine and Atmospheric Research at Utrecht University, Netherlands.