The Intertropical Convergence Zone (ITCZ) appears in this satellite image as the band of clouds circling the Earth near the equator. The image is a combination of cloud data from NOAA’s Geostationary Operational Environmental Satellite (GOES-11) and color land cover classification data. Credit: NOAA-NASA GOES Project

As the second most recent ice age was ending and its glaciers began to retreat, the Earth experienced a large, abrupt climate change that shifted the thermal equator southward by about 4 degrees, according to a new study in Nature Communications. The study for the first time tracks that shift in millennial detail, showing how the Northern Hemisphere cooled and the Southern Hemisphere warmed over the span of a few hundred years.

“The shift likely had significant consequences for global circulation and could have contributed to tipping the climate system over the threshold for deglaciation,” said lead author Allison Jacobel, a Ph.D. student at Columbia University’s Lamont-Doherty Earth Observatory.

It also would have affected the monsoons, today relied on to feed more than half the global population.

Earth’s thermal equator is close to the geographic equator, but it shifts with the seasons. Scientists can locate it by looking for evidence of the rain band that forms there called the Intertropical Convergence Zone (ITCZ). Over the oceans, this band of intense weather is where the Northern and Southern Hemisphere trade winds come together in an area of warm rising air currents. Sailors called it the doldrums because the ITCZ’s low pressure and convection can create days of extreme calm and violent storms. Farmers know it for its connection to the monsoons, the seasonal heavy rains that can lead to famine when they fail.

“Today, variability of the ITCZ is closely observed, but relatively little is known about its position during past climate states,” Jacobel said. “Understanding the forcings and dynamics behind the atmospheric shifts is important for predicting future changes in tropical rains and the monsoon.”

Within those cores, the scientists looked specifically at changes in thorium-232, an isotope found in dust blown in from the continents. The way the northern and southern winds meet at the ITCZ, and the large amount of precipitation that falls there, leads to a larger quantity of airborne dust washed into the ocean at the edges of the ITCZ and settling to the seafloor, marking the ITCZ’s position over time. 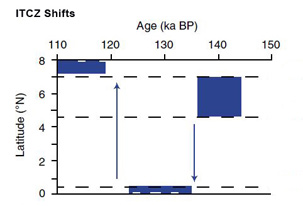 The blue boxes indicate the range of possible latitudes for the mean position of the Intertropical Convergence Zone (ITCZ) as it shifted between 110,000 years ago and 150,000 years ago. The dotted lines represent the location by latitude of the three sediment cores used in the study. Credit: Jacobel, et al., 2016

The results show that about 145,000 years ago, the two northern-most sites had similar dust levels, water temperature and salinity, suggesting that the ITCZ was between them. Then, between 136,000 and 135,000 years ago, the dust fluxes increased in the two southern-most sites, with the strongest peak near the equator. Since the ITCZ acts as a barrier to dust, and records from Antarctica show that the dust was likely coming from the northern hemisphere, the ITCZ was most likely south of the southern-most site at that time.

Starting around 123,000 years ago, changes began again, and by 119,000 years ago, dust fluxes at all three sites had fallen to a point suggesting the ITCZ’s average position was north of 7 degrees North latitude – its current maximum position in this area during Northern Hemisphere summers.

What caused the climate shift has yet to be determined. There are clearly external climate influences, such as the position of Earth’s poles in relation to the sun, but the changes that occurred during this period were too large and too rapid to be attributed solely to the slowly varying Milankovitch cycles, said co-author Jerry McManus, a geochemist and professor at Lamont-Doherty Earth Observatory.

There is significant support among paleoclimate researchers for a sequence of events occurring during deglaciation that would fit the new study’s findings, McManus said. Increases in summer sunlight at high northern latitudes due to changes in the Milankovitch cycles would have increased the melting of large northern ice sheets, leading in turn to catastrophic iceberg discharges that can weaken the oceans’ global overturning circulation and diminish the oceans’ transport of heat from South to North. In this scenario, warming in the South would lead to the melting of sea ice and a poleward shift of the southern westerlies, increasing upwelling in the Southern Ocean. These effects would increase the venting of carbon dioxide from the deep ocean into the atmosphere, creating a warming feedback loop. Computer simulations predict such a shift would happen if the global overturning circulation shut down.

Other studies have documented evidence of several of these events happening during the period of deglaciation studied: there was a large release of meltwater and icebergs into the North Atlantic; overturning circulation was weakened; and the North got colder while the South became dramatically warmer for a period, before the North began to warm again during the Eemian interglacial period. The new records document the dramatic shifts in the hemispheric heat gradient that accompanied these changes.

The methods used in the study provide a new way of measuring historic climate shifts and locating the ITCZ’s past positions, which is important for understanding ocean-atmospheric dynamics, tropical hydrology, and the ocean’s role in regulating change in atmospheric carbon dioxide. Jacobel’s future research will use these methods to compare climate shifts during other glacial cycles and deglaciations.

“The work by Jacobel et al. is instrumental in showing the relevance of marine sediment dust records to understanding the relationship between abrupt global climate change events and shifts in atmospheric circulation patterns. An understanding of such relationships is crucial to making sense of the mechanisms that drive changes in the Earth’s climate system,” said Franco Marcantonio, an isotope geochemist and professor at Texas A&M University who was not involved in the study.

The other co-authors of the paper were geochemists Robert Anderson and Gisela Winckler, both of Lamont-Doherty Earth Observatory.