A massive landslide in Alaska’s snowy Wrangell-St. Elias mountain range in July may have been caused by a summer heat wave making some slopes more vulnerable to collapse, says the scientist who first discovered the avalanche.
“Most of the big landslides that I’ve worked on in Alaska from 1999 to now have been south-facing, summer-time failures,” Colin Stark, a geophysicist at Columbia University’s Lamont-Doherty Earth Observatory told NASA’s Earth Observatory. “My suspicion is that this landslide was probably caused by sustained daytime warming and progressive melting of rock permafrost.”
The slide let loose some 35 million tons of rock and debris, a collapse that registered on the global seismic network and was detected within hours by Stark and his colleagues Göran Ekström and Clément Hilbert from the Lamont campus in Palisades, N.Y. The July 25 landslide was confirmed by pictures taken by NASA satellites before and after the event.
When faults slip to create an earthquake, they shake the ground with intense, high-frequency waves that are picked up by earthquake monitoring systems worldwide.
Landslides also generate waves, but most are of a slower, low-frequency variety. Stark and Ekström have developed an algorithm for scanning seismographic data for those signature low-frequency waves. In a study in Science earlier this year, they picked through global earthquake records to document 29 major landslides that have happened in the world since 1980, a third of which had never been documented before.
The landslide in the Wrangell-St. Elias range this summer came amid a streak of unusually warm days for southern Alaska.  For 15 days in a row, temperatures in Anchorage topped 70 degrees F, breaking the previous record of 13 days set in 2004, according to the National Weather Service. 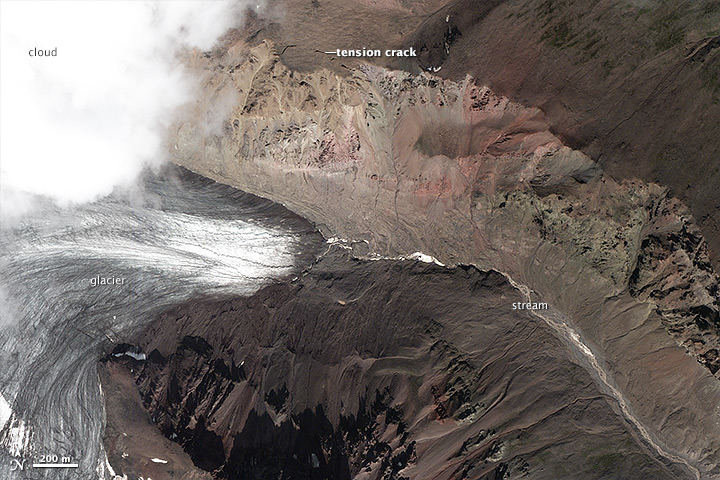 A satellite took this picture a day before a massive landslide in Alaska’s Wrangell-St. Elias range. (NASA) 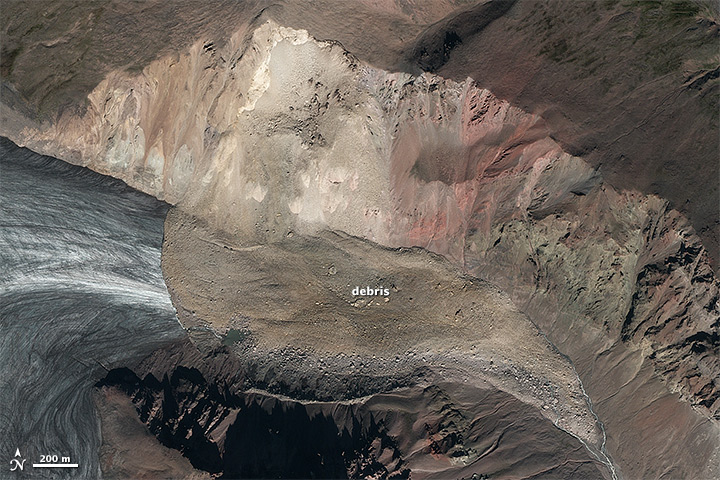 Two weeks later, this is what the mountain slope looked like. (NASA)
More: