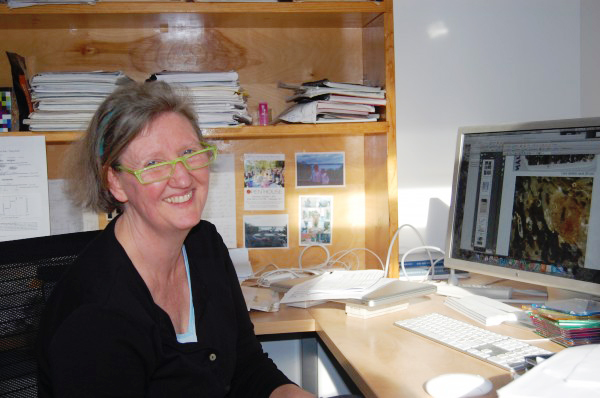 Terry Plank got hooked on volcanoes when her professor at Dartmouth took the students to Costa Rica and let them have lunch on Arenal, a famous volcano that was in the process of erupting. “They gave us each a pineapple and a can of tunafish and we had to figure out how to eat this stuff with our Swiss Army knives while sitting on a lava flow…It just looked like black rock, but every once in awhile a boulder at the end would fall off and you’d see it was completely red inside. And it made all these cool sounds and you’d feel these little earthquakes… It was totally cool. How could you not like that?”

Plank is a geochemist whose work focuses on what goes on deep beneath the earth and how that affects the world’s volcanoes. A researcher at the Lamont-Doherty Earth Observatory, she also teaches the undergraduate Frontiers of Science course at Columbia University.
Growing up in Wilmington, Del., in a house built in a schist quarry with two parents who were chemists, her fascination with geology was probably inevitable. As a child, Plank collected rocks. She later attended Dartmouth University, graduating summa cum laude with a degree in earth sciences. She earned her PhD at Lamont-Doherty and then taught and did research at the University of Kansas and Boston University, before returning to Lamont in 2008. Plank has a 13-year-old son, Sam, who’s been to 16 volcanoes.
“Every rock has a story to tell,” Plank says. The pursuit of those stories led her to do fieldwork in the Mojave Desert, the Grand Canyon, the Aleutian Islands, Nicaragua, Costa Rica, Mexico, the Tonga Islands and the Marianas.
Plank’s favorite fieldwork experience was going out to sea to drill sediments off the Marianas Trench, the deepest part of the world’s ocean and the site of the oldest ocean crust.
“You’re off in this remote part of the world with 30 other scientists…You feel the sway of the sea. And you’re dredging or drilling, and something new is coming up on deck that nobody has ever seen before. I loved that,” she recalls.
When Plank first arrived at Lamont, she was studying underwater volcanoes, using volcanoes merely as a conduit to understand what is happening inside the earth. During the 1960s, when the theory of plate tectonics was being formulated at Lamont and other institutions, scientists knew that the seafloor was sinking into the mantle and creating earthquakes, and knew this activity was associated with volcanoes, but connecting the dots proved difficult. Plank was first recognized for her work on subduction and what gets subducted. Subduction is a geological process in which one tectonic plate slides under another and sinks into the mantle (the layer of earth between the crust and the core)—it generates the greatest earthquakes, like the recent ones off Japan and Sumatra that caused devastating tsunamis, and most of the planet’s explosive volcanism. She studied the elements in sediments that were about to be subducted off the Marianas, Alaska and Costa Rica and figured out that each area has a distinct geochemical fingerprint in its sediments, a specific combination of elements. She then determined that there was a connection between material that was going down the hatch of the subduction zone, getting recycled and coming back out via the volcano; this is still the strongest link established between subduction and volcanism.
Plank’s research has enhanced the understanding of the complex subduction process. As plates of the earth’s crust come together, one sinks below the other into the earth.
Because it’s been at the bottom of the ocean for hundreds of millions of years, it contains water and minerals that are carried below as if on a conveyor belt. In the process, the plate gets heated and pressurized and loses its water. The lost water rises buoyantly again, now as some kind of fluid or melt (scientists are not quite sure which) into the mantle, causing it to melt. The water is dissolved in the melt in a magma (molten rock beneath the earth’s surface), and as it rises, bubbles of gas form, and then an eruption occurs. The water that comes spewing out of the volcano evaporates, becomes rain and returns to the ocean again. This volcanic water cycle, from the subduction zone and back, takes a few million years. The line of volcanoes around the Pacific called the Ring of Fire exists because these are places where the mantle is melting, because water is being injected into it.
Plank’s ongoing research in Central America is focused on measuring how fast magma moves from the mantle by studying olivine crystals from the mantle itself that form and are frozen into volcanic rock after an eruption. By analyzing the chemical composition of the olivine, researchers can tell how long the crystals have been in the magma, and thus how long it has taken them to rise from the mantle to the surface.
The big question Plank is trying to answer in more recent research is why volcanoes sometimes erupt quietly and sometimes explosively.
“They clearly have switches,” she says, “and we don’t know what’s driving the switches.”
Researchers know it has something to do with how fast the H2O gas bubbles and magma rise before they erupt but don’t know what determines the rate. Her current fieldwork at Kilauea on Hawaii is an attempt to figure this out. Kilauea has been erupting peacefully since the 1950s, but about 500 years ago, it had explosive eruptions. Plank and her researchers are studying how fast the gas content is moving and how it is getting out.
At any given time, there are about 15 volcanoes erupting on earth. Fortunately for human beings, there are very few cases where volcanoes erupt without warning.
“There’s almost always little earthquakes, and gas, like more CO2 starts coming out… But we’re not really trying to predict when they’re going to occur, because you can’t do that,” says Plank. “We can say there’s a 90 percent chance or a 50 percent chance it’s going to erupt in the next three months, and then do our best to inform people in harm’s way.”
Plank has received the Houtermans Medal from the European Association for Geochemistry and the Donath Medal from the Geological Society of America; she is a Fellow of the American Geophysical Union, the Geochemical Society, the Geological Society of America and the Mineralogical Society of America. In 2012 she received a $500,000 MacArthur Fellowship, and in 2013, she was elected into the National Academy of Sciences.
Media Inquiries:
Kevin Krajick
kkrajick@ei.columbia.edu
(212) 854-9729
Tags:
volcanoes