Transforming a Passion for Oceans into Discovery

In November 1983, physical oceanographer Arnold Gordon was the Chief Scientist on the R/V Knorr, sailing around the southern tip of Africa, when the characteristics of his water samples came in terribly off. The temperature and the salinity of the water his team collected did not match the profile of the Southeast Atlantic Ocean. He had seen there characteristics before though, and soon, with more data, he confirmed that this clearer-blue “blob” of water they floated on top of was actually water from the Indian Ocean, coming in through a leak. This water, flowing from the Indian Ocean into the Atlantic, became known as the “Agulhas leakage” and helped us understand how the ocean’s salt is circulated back into the North Atlantic Ocean. 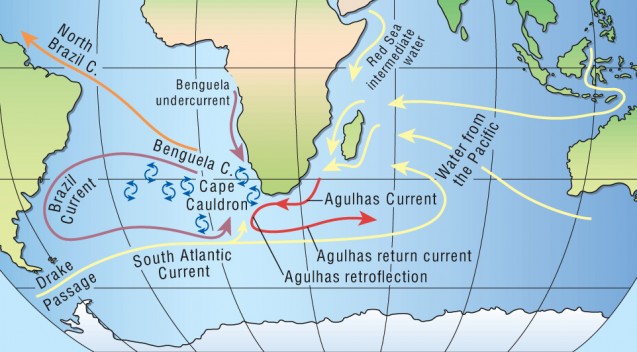 This major discovery came not long after his journey to Antarctica, in February 1977, when Gordon showed that deep-reaching water movement, called convection, occurred all the way down to the sea floor, both in the margins of Antarctica and in the open ocean around it. This movement is based upon density, and affects nutrient flows to different depths. Knowing the nutrient sources helps us better understand the characteristics of marine life that can survive in such areas.

More recently, in Indonesia, Gordon observed the Indonesian sea water was not warmed at the surface, as previously thought, but instead about 150 meters deeper. From a circulation standpoint, this meant the Pacific Ocean actually keeps more of its heat, and the Indian Ocean is giving less of its heat to the Pacific Ocean, impacting our knowledge of heat transfer and climate behavior in this Asian monsoon region.

Gordon, now 77, is an honored professor at Columbia University. His collective five years at sea, exploring the ocean on Argentinian, Britain, German, Indonesian, Russian and U.S. ships, fueled his 215+ publications and his scientific contributions. He has been awarded an honorary degree from the University of Cape Town, South Africa, the U.S. Antarctic Service Medal, and been named a Fellow in the Advancement of American Science. 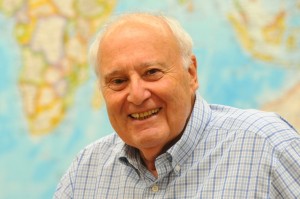 I met with Gordon in his map-filled classroom to understand what in his past may have influenced him to eventually make these discoveries.

Gordon’s grandparents immigrated to the US from Lithuania and Romania. His parents were first generation citizens of the United States. He said his family’s story was part of “the natural progression of immigrants to the country. … First generation, who was born here in the United States, generally had some kind of worker jobs, blue collar kind of jobs – salesmen, and things like that. And their children, which would be me and my cousin, generally went into professions like law or science or business.”

While Gordon and his cousin had 19 years between them, his cousin was a significant role model. His cousin was getting his doctorate at Columbia University, where he was studying the connection of climate and population. Gordon felt he was likely the reason why “I would get delivered to the house the weather maps from the weather bureau every day. I used to study these weather maps of the United States to understand all the highs and lows…I knew I was interested at a very early age in the atmosphere and the weather, climate.”

When he told his parents what he wanted to study, Gordon recounted, “They probably thought it was the natural thing for me to do. They were most happy that my whole education from elementary school to graduate school didn’t cost me anything. Can you imagine?”

Gordon did his undergraduate studies at Hunter College of the City of New York. There, he wrote his college thesis on how the ocean affects climate. He still has that paper. “I started with weather records from South America in Rio de Janeiro, and I went clockwise around to the North Atlantic and ended up in Dakar, of Northwest Africa. I showed how the weather and climate in all these 15 cities were affected by the ocean.”

Gordon was admitted to both MIT and Columbia University for doctorate studies; however, Columbia offered him a full scholarship through the Ford Foundation Fellowship Program. After finishing his degree, he started his teaching career at Columbia and his research simultaneously.

Despite wanting to make an impact in his field, Gordon, said, “I didn’t go [out] there to make a discovery that no one knew before, because how did I know there was something there that no one knows? That’s what discovery is all about. It’s these random observations that lead to discoveries that then change how you view the world.”

So, what brought him to go on a ship, if he had no plan? “While there was some plan, I suppose, a lot of it was random.” He added that “me just randomly wandering around the ocean on ships and making measurements led to important stuff, without over-thinking what I was doing.”

Not every observation he made led to a discovery, though. Gordon laughed when asked how he distinguished between normal and noteworthy observations. “When you collect data that’s unexpected, the first thing you do is you suspect that it’s the instrument that is not working right,” he said. “So what you do is you look at that. When you convince yourself that the observation is valid, then you go ahead,” to start further research.

Gordon feels that he had a talent that allowed him to make discoveries: quickly adapting. “When I made an observation that was unexpected, I recognized that very rapidly so that I was able to, in the next hours or days, follow it through with more observations to support it…I think what happens is nowadays, there is so much data coming in that nobody is looking at the data in real time, so discoveries are lost.”

Deep knowledge of ocean circulation has led Gordon to new concerns. He explained that “climate change is misleading.” While those on land are aware of the mass extinction of elephants, “the marine ecosystem is changing even more drastically.” He feels this “is not appreciated because people do not see the ocean.” 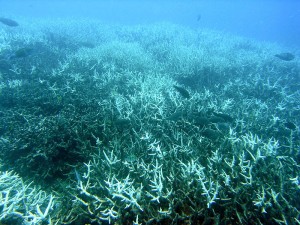 “The coral is getting bleached from warming, the carbon dioxide being absorbed in the ocean is changing the acidification, and then the overfishing,” he said. “The effect on the marine ecosystem due to fisheries is enormous and it is not evident to people because we’re not there. It is evident to the scientists studying it. The ocean is being absolutely devastated by climate change, not to mention dredging the sea floor and using dynamite to blow up the coral reefs.”

“The Atlantic is nothing what it looked like before. When I started out in the 1960s, we would see whales all the time. Even in the Indian Ocean we would see whales and orcas all around us. Now, the Pacific and Indian are being attacked big time by international fleets and vessels killing off the whales. While there might be regulations against this, it is very difficult to enforce the laws in international waters.”

As government leadership changes, Gordon feels, “there is a lot of concern that the data sets stored within governmental websites will be erased and not be available. I think that is extraordinarily scary.” In terms of why someone would erase climate data, Gordon stated, “It’s quite clear what their motive is. They want to hide any information that the climate is changing, and primarily, that the climate is changing because of anthropogenic activities.”

Historically, there have been conflicting messages on whether climate change was happening or was caused by humans. Gordon feels that today, “Many of the climate deniers accept that the climate is changing, but they are unified against it being caused by people or our burning of fossil fuels, agricultural practices, deforestation… It’s very political. I have to assume they’re not stupid, so there has to be some motive we don’t understand [for denying this].”

When asked what he thought motivates climate deniers, he responded, “I can think of two things: One is that you get greater comfort from thinking things won’t change. The other thing is more economically motivated, in that they want to preserve the money the oil and coal companies can make, if people still buy those fossil fuels. “

Gordon added, “But isn’t it better just not to think of it? Isn’t it easier to just say it’s wrong? You’re talking about more than 90% of scientists who believe climate change is driven by people, and the impact will get bad with sea level rise. Yet the climate deniers say the other 2% are right.” His figures are supported by the Consensus on Consensus study (Cook et al), which analyzed the earlier estimate that 97% of climate scientists agreed that humans are causing global warming.

In terms of how important this issue is, Gordon stated, “Anyone with a brain who cares about their children and grandchildren should know this is absolutely the most major thing that has happened to our civilization since the black plague, which killed a quarter of population, and the devastating world and civil wars. This climate change issue is on this scale of the worst things that happen to civilization.”

In the midst of President Trump rejecting the Paris climate agreement, as well as proposing to defund 31% of the Environmental Protection Agency, from $8.2 billion in 2017 to $5.7 billion for 2018, Gordon observed that “a lot of the young people are worried about the future funding of their science and any science that has to do with climate. Trump’s budget on climate-relevant science is drastically cut, so much so, that it is almost non-existent.” The EPA outlined these budget cuts to eliminate the greenhouse gas reporting project, marine pollution programs, pollution prevention programs, RCRA’s waste minimization and recycling programs, lead risk reduction programs and water quality research grants.

After a lifetime contributing to science, Gordon said that now “there is a lot of worry about the future of American science. The greatest problem that civilization faces now is the changing environment because of anthropogenic effects – and just at a time when we really gotta get going to fix it, the attention will be away from it.”

Melissa Meggiolaro is a 2017 graduate of the M.S. in Sustainability Management program.