News Subtitle:
Aerosols have Compensated for Greenhouse Gases, but Won't in the Future 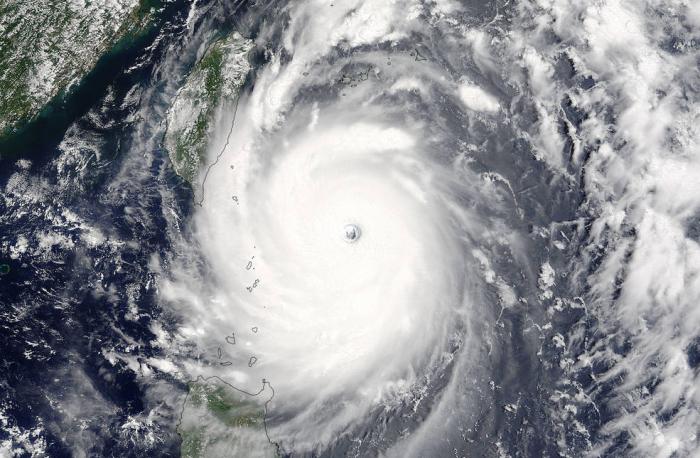 Powerful tropical cyclones like Super Typhoon Nepartak that lashed Taiwan with 150-mile-per-hour winds in July and flooded parts of China are expected to become even stronger as the planet warms. That trend hasn’t become evident yet, but it will, scientists say.

So far, the warming effects of greenhouse gases on tropical cyclones have been masked, in part by air pollution.

Over the past century, tiny airborne particles called aerosols, which cool the climate by absorbing and reflecting sunlight, largely cancelled out the effects of planet-warming greenhouse gas emissions when it came to tropical storm intensity, according to a new scientific review paper published this week in the journal Science. That might sound like a good thing, but many of those particles came from the burning of fossil fuels and wood, and contributed to acid rain, smog and lung damage. As vehicles and power plants added filters and scrubbers to reduce their impact on human health, levels of man-made aerosols in the atmosphere began to decline. At the same time, greenhouse gas concentrations continued to rise.

That compensating effect won’t continue if greenhouse gas warming keeps increasing, the scientists write. Using model simulations, they provide new calculations of the cancelling effects of aerosols and greenhouse gases on tropical cyclones worldwide. They also take a closer look at the still-developing understanding of how climate change will affect tropical cyclones, also known regionally as typhoons or hurricanes.

"The fact that global warming's fingerprints don't yet jump out at us when we look at hurricanes isn't surprising – it’s what current science tells us we should expect," said lead author Adam Sobel, a professor at Columbia University’s Lamont-Doherty Earth Observatory and School of Engineering. "The same science tells us that those fingerprints will show up eventually in more ultra-powerful storms." 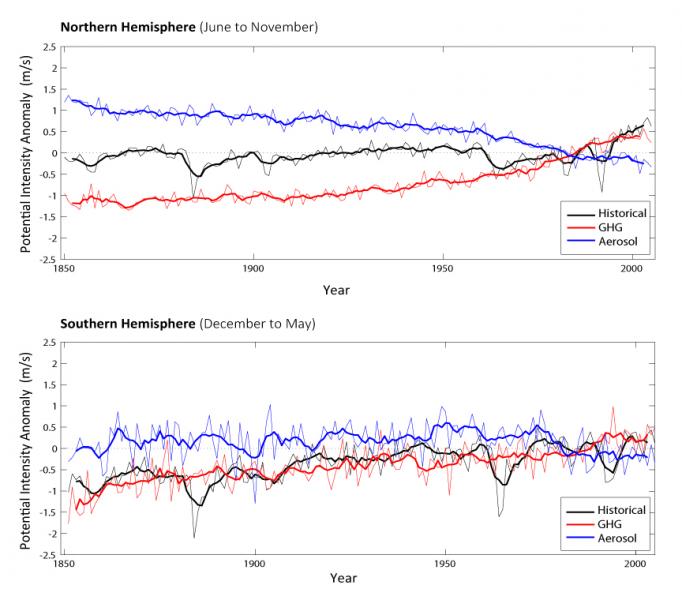 The scientists examined a wide range of published analyses of tropical cyclone data and computer modeling, looking specifically at potential intensity, which predicts the maximum intensity that tropical cyclones could reach in a given environment. Their new global calculations of the cancelling effect follow a 2015 study led by Lamont’s Mingfang Ting, with Suzana Camargo, also a coauthor on the new paper, that showed similar effects over the North Atlantic, where hurricanes that make landfall in the United States form.

Many factors contribute to a tropical cyclone's intensity. At the most basic, the storm's convective strength – the boiling motion of air rising from the ocean surface to the atmosphere – depends on the temperature difference between the surface ocean and the upper atmosphere.  Computer models that simulate the physics of tropical cyclones suggest that this difference should increase as the climate warms, and that tropical storm strength should increase with it.

Less well understood is how climate change should influence the number of tropical cyclones that form each year. Computer models indicate that while the total number of cyclones should decline in a warming climate, more intense, highly destructive storms like Super Typhoon Nepartak are likely to become more common.

We have seen harbingers of that change in recent years: Typhoon Haiyan, also known as Yolanda, killed more than 6,300 people as it devastated parts of the Philippines as a Category 5 storm in 2013. Last year, Hurricane Patricia became the second most-intense tropical cyclone on record when its sustained winds reached 215 mph before weakening to hit Mexico with winds still powerful at 150 mph.

The scientists’ review finds that the largest increases in tropical cyclone potential intensity are expected to be at the margins of the tropics, particularly in the Atlantic and Pacific. The amount of rain that tropical storms bring is also expected to increase as the planet warms, due to increasing water vapor; and coastal flooding from storm surges that accompany tropical storms are expected to become more of a problem as sea levels rise.  The scientists also describe a shift in tropical cyclone tracks toward the margins of the tropics, noting that it is unclear if the shift is a response to warming. Simulations for the western North Pacific suggest that it is, at least in part.

Detecting the influence of climate change

One is the influence of aerosols. Model calculations indicate that aerosols have about twice the effect of greenhouse gases on a tropical cyclone’s potential intensity. So while greenhouse gas levels have been greater than aerosol levels for many decades in terms of absolute magnitude – which is why the planet has warmed by about 1.5°F since the Industrial Revolution – they have only recently surpassed the cooling effect of aerosols in terms of their influence on tropical cyclone intensity.

The other challenge is natural variability. Tropical cyclones are relatively rare – the world averages around 90 per year – and that number fluctuates from year to year and decade to decade, due in large part to natural causes. It is statistically difficult to detect long-term trends within that large natural variability, Sobel said. Satellite records that can monitor tropical storms worldwide also only go back to the 1970s.

Scientists at Lamont, including Sobel, Camargo and coauthors Allison Wing and Chia-Ying Lee, are using both observations and computer models to expand understanding of how tropical cyclone behavior has changed and the physical mechanisms by which climate affects extreme weather. Among other projects, they are developing a tropical cyclone risk model that can be used in urban planning that incorporates climate factors in determining the probability of a tropical cyclone making landfall at a given location.

The other coauthors of the paper are Michael Tippett of Columbia’s School of Engineering, and Timothy Hall of NASA’s Goddard Institute for Space Studies. Funding for the research was provided by the National Science Foundation and the Office of Naval Research.