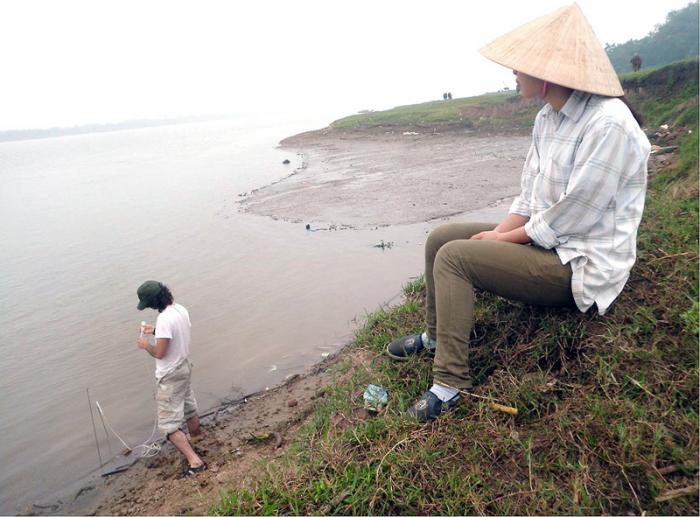 High concentrations of arsenic are making their way from the Red River into aquifers near Hanoi, Vietnam, a new study shows. Mason Stahl tests water at the river's edge where sediment is being deposited. Photo: Courtesy of Mason Stahl

Large-scale groundwater pumping is opening doors for dangerously high levels of arsenic to enter some of Southeast Asia’s aquifers, with water now seeping in through riverbeds with arsenic concentrations more than 100 times the limits of safety, according to a new study from scientists at Columbia University’s Lamont-Doherty Earth Observatory, MIT, and Hanoi University of Science.

Normally, groundwater levels in this monsoon region are higher than the rivers, so water flows from aquifers into adjacent waterways. A few years ago, however, scientists began noticing that large-scale groundwater pumping around cities like Hanoi was lowering the groundwater level, so much so that the flow had reversed in some areas and river water was making its way into the aquifers instead.

The scientists have since tested the water and riverbed along the Red River near Hanoi and discovered dangerously high concentrations of dissolved arsenic, far higher than expected, but they also found clear patterns of contamination that may be able to help farmers and communities locate lower-risk sites for wells.

The findings, appearing in the American Geophysical Union journal Water Resources Research, carry important lessons for groundwater management in a region that has long struggled with health effects of arsenic contamination.

Arsenic in groundwater is a problem in many countries, including parts of the United States, but it is widespread in Southeast Asia, where its impact on poor communities has been described as the largest mass poisoning in history. Long-term exposure can cause liver and kidney damage and skin cancers that cause sores on the hands and feet. Arsenic in irrigation water can also affect rice yields. Large-scale pumping is allowing riverwater to seep into aquifers during most of the year around Hanoi now and significantly lowering groundwater levels in other large cities, including Dhaka, Bangladesh.

“We have this perception of groundwater as this giant underwater lake, a nearly infinite resource. But even in places were the water is rapidly recharged, using it a lot can move water around in ways that affect the location and extent of contamination,” said co-author Ben Bostick, a geochemist at Lamont, who with co-author Alexander van Geen of Lamont has been working for over a decade with communities in Vietnam, Cambodia and Bangladesh to avoid arsenic contamination and locate safer water sources.

In Hanoi, groundwater pumping doubled during the 2000s to an estimated 240 million gallons a day by 2010, and groundwater levels there have been dropping by about 1 meter per year. The effects have become evident in the village of Van Phuc, about 10 kilometers downstream, where arsenic from riverbed sediments has started to contaminate an older aquifer that had long been considered clean.

For the new study, the scientists traveled along the Red River using a device that looks like a syringe with a very long needle to take samples of riverbed sediment and water at a depth of 1 meter. They found the highest arsenic levels in areas where the river flow was slow and new sediment was being deposited, typically next to land inside a river bend. Young sediments can be highly reactive and susceptible to releasing arsenic as water flows through them. The sediments in these slow-water areas were less than 10 years old in places, and they were releasing arsenic into groundwater at concentrations exceeding 1,000 micrograms per liter, 100 times higher than the World Health Organization considers safe. 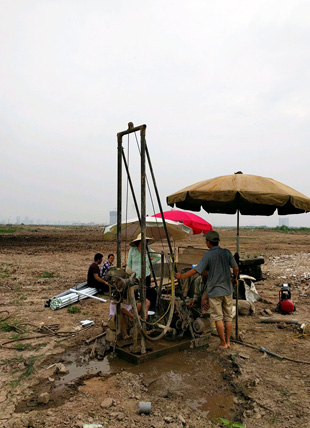 In contrast, almost all of the wells near faster-flowing water – where little new sediment was accumulating – tested below the WHO limits.

“Prior to intensive pumping, the water would not have been flowing through these sediments, and the aquifer would not have been drawing in this much arsenic,” said Mason Stahl, lead author of the study and a recent Ph.D. graduate of MIT.  "If groundwater pumping continues – and it will probably intensify – the contamination will continue to migrate.”

South and Southeast Asia are especially susceptible to arsenic poisoning because their low-lying deltas are largely made up of young sediments and have plenty of organic matter that contributes to the release of arsenic into water.

The Red River’s arsenic generally comes from iron oxides carried downstream from the mountains. When iron oxides are deposited along the riverbed, they are in an environment that is low in oxygen and high in organic matter, from sources such as plant matter and sewage. Bacteria reduce the iron oxide to release oxygen, and that natural process allows the arsenic to enter the water. The process is fast. Within a few months, the scientists measured concentrations up to 1,500-2,000 micrograms per liter from new sediment.

The results suggest that for pumping, communities should still target the oldest aquifers, where sediments are no longer being deposited and most of the arsenic has leached out. But they also need to think about other potential arsenic sources – such river bends with fresh sediment.

“The good news is that rivers normally meander, and cities very seldom are the size of one meander,” Bostick said. Cities can put their well fields in areas where the aquifers aren’t being recharged through young river sediment, he said. Damming a river would also keep sediment back and control the river’s height, but dams can pose other challenges by changing sedimentation, ecology and the water budget.

Water treatment and filtration are also becoming more common, and Bostick believes this may be the most effective solution. The arsenic is not going to go away overnight, and pumping for irrigation will continue so farms can feed the region’s large population. “Although groundwater has a lot of advantages, you also have to really think about how much you want to use it. With technology, it’s pretty easy to clean surface water to use it now,” Bostick said.

Michael Puma, an expert on water and food security at NASA’s Goddard Institute for Space Studies who was not involved in the study, noted that “Arsenic contamination of groundwater threatens well over 100 million people worldwide. These important findings will help us as we strive to manage and improve the quality of drinking water, especially for those living in extreme poverty around the world.”