In a Warmer World, Expect the Wet to Get Wetter, and the Dry, Drier 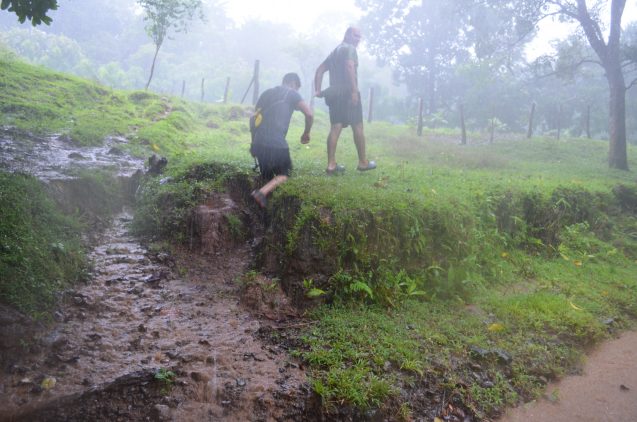 The world may be getting set up for similar situation now, they say. Over the past 50 years, the middle and high latitudes in the northern hemisphere have warmed roughly twice as much as the corresponding latitudes in the southern hemisphere, and this disparity may continue to grow as Arctic sea ice continues to decline. Putnam and Broecker predict that as the atmosphere warms more quickly in the north than in the south, the thermal equator and tropical and mid-latitude rain bands will continue to march northward, but migrate less-so southward during the northern winter months.

A smaller seasonal migration of the thermal equator already occurs today. During the northern summer months, the tropical and mid-latitude rain belts migrate north as the northern hemisphere warms. As it cools during the winter, rains return south.

Large-scale or abrupt heating and cooling events can force such migration to become more drastic. The authors note that global paleoclimate records derived from polar ice cores, ocean and lake sediments, and cave deposits document the northward migration of the rain belts and paint a picture of widespread long-term hydrological changes during an abrupt period of warming from about 14,600 to 12,700 years ago.

In South America, areas on the northern end of the tropical rain belt, around modern Venezuela, show evidence of increased precipitation through amplified river runoff. At the same time, rivers in eastern Brazil slowed considerably, and a large lake in the Bolivian Andes dried to a fraction of its earlier size.

The mid-latitudes of North America also show hydrological changes at the same time. The level of a once-large lake in Nevada dropped significantly, and stalagmite records in other areas of the American Southwest suggest a sharp decline in winter precipitation.

In East Africa, sediment cores recovered from Lake Victoria suggest that it was completely dry before the northward migration of the thermal equator. Increased precipitation in East Africa after 14,600 years ago recharged rivers and caused the lake to fill. In addition, geochemical evidence in stalagmites in Chinese caves as well as Greenland ice cores suggest an abrupt strengthening of the South Asian monsoons.

During a period of abrupt cooling known as the Little Ice Age, from 1200 to 1850 A.D., this pattern reversed. During this time, the thermal equator shifted southward as a result of global cooling. The South Asian monsoon weakened, and precipitation in Peru increased. Further evidence of a southward shift of the tropical rain belt can be found in lake sediment cores from small islands in the equatorial Pacific. These records suggest that during the Little Ice Age, the belt was displaced nearly 800 kilometers south of its current position.

A warmer atmosphere in general will cause global precipitation to become increasingly focused on the tropics, say Putnam and Broecker. Tropical areas will receive more net precipitation, but this will happen at the cost of drier areas becoming more arid.

(This article is adapted from a press release by the University of Maine.)