Water Is Streaming Across Antarctica 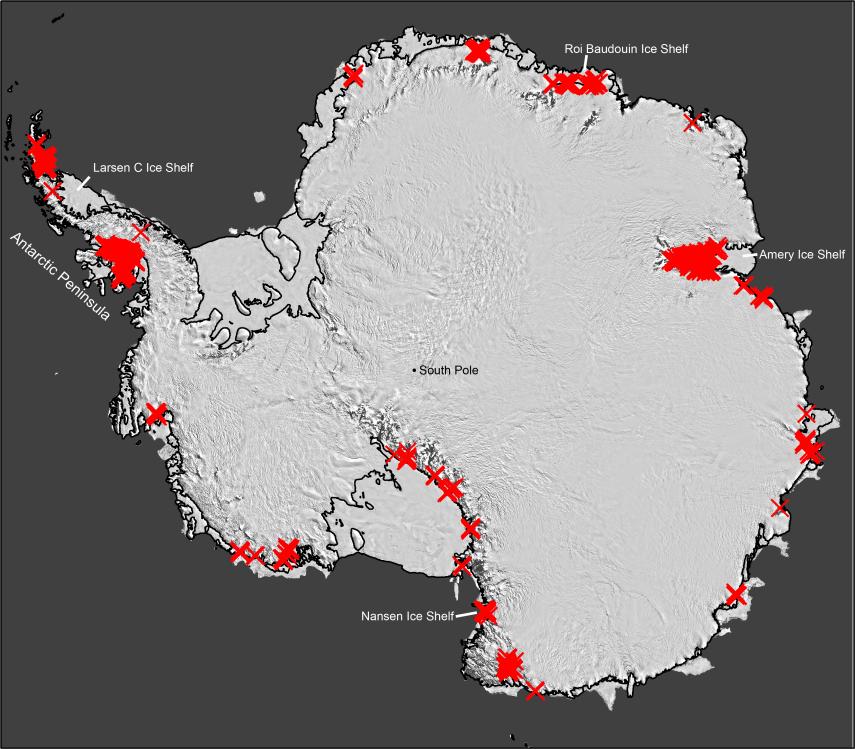 In the first such continent-wide survey, scientists have found extensive drainages of meltwater flowing over parts of Antarctica’s ice during the brief summer. Researchers already knew such features existed, but assumed they were confined mainly to Antarctica’s fastest-warming, most northerly reaches. Many of the newly mapped drainages are not new, but the fact they exist at all is significant; they appear to proliferate with small upswings in temperature, so warming projected for this century could quickly magnify their influence on sea level. An accompanying study looks at how such systems might influence the great ice shelves ringing the continent, which some researchers fear could collapse, bringing catastrophic sea-level rises. Both studies appear this week in the leading scientific journal Nature.

Explorers and scientists have documented a few Antarctic melt streams starting in the early 20th century, but no one knew how extensive they were. The authors found out by systematically cataloging images of surface water in photos taken from military aircraft from 1947 onward, and satellite imagery from 1973 on. They found nearly 700 seasonal systems of interconnected ponds, channels and braided streams fringing the continent on all sides. Some run as far as 75 miles, with ponds up to several miles wide. They start as close as 375 miles from the South Pole, and at 4,300 feet above sea level, where liquid water was generally thought to be rare to impossible.

“This is not in the future—this is widespread now, and has been for decades,” said lead author Jonathan Kingslake, a glaciologist at Columbia University’s Lamont-Doherty Earth Observatory. “I think most polar scientists have considered water moving across the surface of Antarctica to be extremely rare. But we found a lot of it, over very large areas.” The data are too sparse in many locations for the researchers to tell whether the extent or number of drainages have increased over the seven decades covered by the study. “We have no reason to think they have,” said Kingslake. “But without further work, we can’t tell. Now, looking forward, it will be really important to work out how these systems will change in response to warming, and how this will affect the ice sheets.”

Many of the newly mapped drainages start near mountains poking through glaciers, or in areas where powerful winds have scoured snow off underlying bluish ice. These features are darker than the mostly snow-covered ice sheet, and so absorb more solar energy. This causes melting, and on a slope, liquid water then melts a path downhill through overlying snow. If the continent warms this century as projected, this process will occur on a much larger scale, say the authors. “This study tells us there’s already a lot more melting going on than we thought,” said coauthor Robin Bell, a Lamont-Doherty polar scientist. “When you turn up the temperature, it’s only going to increase.”

Seen from an aircraft, a 400-foot-wide waterfall drains off the Nansen Ice Shelf into the ocean. (Wong Sang Lee/Korea Polar Research Institute)

Antarctica is already losing ice, but the direct effects of meltwater, which generally refreezes in winter, are probably negligible for now. The concern among glaciologists is that this could change in the future. Most loss right now is taking place near the edges, where giant, floating shelves of ice attached to the land are being eroded from underneath by warming ocean currents. The shelves, which ring three-quarters of Antarctica, help hold back the land-bound glaciers behind them, and as they lose mass, glaciers appear to be accelerating their march to the sea.

The most dramatic example is the Antarctic Peninsula, which juts far north from the main ice sheet, and where average temperatures have soared 7 degrees Fahrenheit in the last 50 years. In 1995 and 2002, large chunks of the peninsula’s Larsen Ice Shelf suddenly disintegrated into the ocean within days. Scientists now suspect that pooling water was at work; liquid tends to burrow down, fracturing the ice with heat or pressure, or both, until a shattering point is reached. Today, another giant piece of the Larsen is cracking, and could come apart at any time.

Further south, temperatures have remained more or less stable, but many of the newly spotted streams there already make their way from the interior out onto ice shelves, or originate on the shelves themselves. That raises the specter that such collapses could happen across much vaster reaches of Antarctica this century, should warming proceed as expected, said Kingslake. 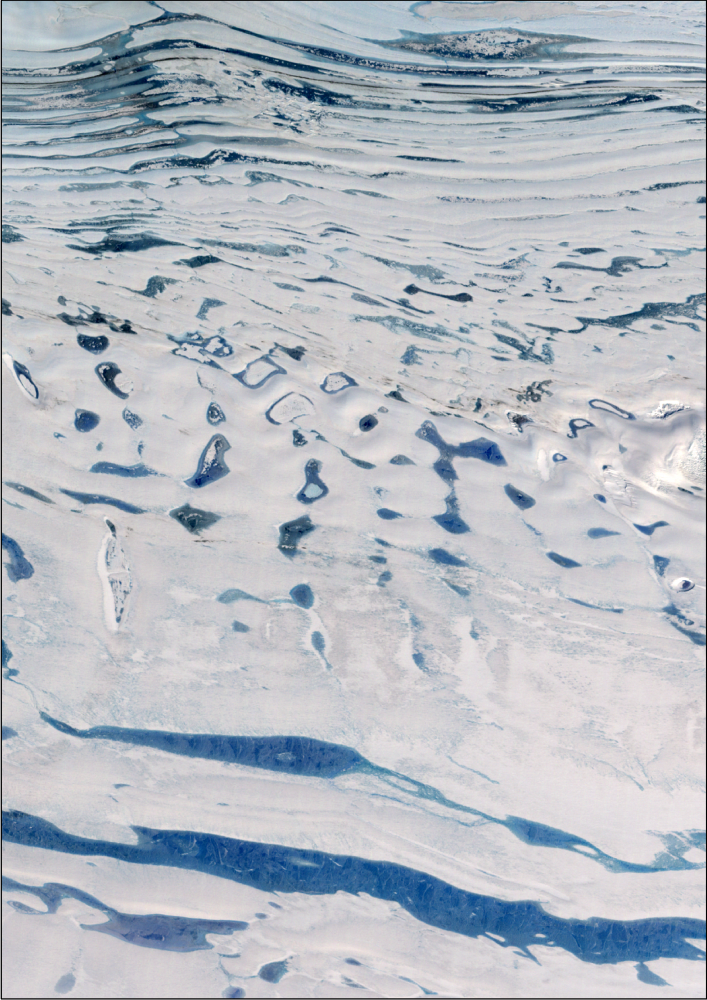 On the other hand, an accompanying study led by Bell found that a longtime drainage on West Antarctica’s Nansen Ice Shelf may actually be helping keep the shelf together. The elaborate river-like system on the 30-mile-long shelf was first observed in 1909, by a team from the expedition led by British explorer Ernest Shackleton. Aerial imagery and remote sensing since then shows it has remained remarkably stable, efficiently draining excess meltwater during summer through a series of deep sinkholes and a roaring 400-foot-wide waterfall into the ocean. “It could develop this way in other places, or things could just devolve into giant slush puddles,” said Bell. “Ice is dynamic and complex, and we don’t have the data yet.”

Near the other pole, seasonal melt streams and ponds are far more common on the fast-warming Greenland ice sheet, and their growing influence may hold lessons. In recent years as much as 90 percent of Greenland’s ice surface has undergone some degree of seasonal melting. Much of the water probably stays at or near the surface and refreezes in winter. But in some areas, it is plunging through deep holes to underlying rock, lubricating glaciers’ slide to the sea. In others, water may be refreezing near the surface into solid sheets that can more easily channel surface melt to the sea in succeeding seasons. Until recently, icebergs discharged from glaciers were Greenland’s main contributor to sea-level rise. But between 2011 and 2014, 70 percent of the 269 million tons of Greenland’s ice and snow lost to the ocean came directly from meltwater, not icebergs.

Antarctica’s visible drainages may be the tip of the proverbial iceberg. Another study by a separate team published in January revealed that East Antarctica’s Roi Baudouin Ice Shelf harbors a largely invisible liquid drainage just under the snow. The team, led by Utrecht University polar scientist Jan Lenaerts, detected it using radar images and drilling. They suspect that such features lurk in many places. And unlike surface streams, these ones are insulated, so may stay liquid year-round.

Helen Fricker, a glaciologist at Scripps Institution of Oceanography who was not involved the new studies, said of the continent-wide survey, “We knew there were other [melt] zones, but we didn’t know exactly how extensive they are. This is a really nice study, as it does just that.” Douglas MacAyeal, a glaciologist at the University of Chicago also not involved in the studies, said that until recently, “nobody’s been that interested in melting,” because most scientists thought it was relatively rare. Now, he said, “We’re working hard to figure out if this stuff is relevant to sea-level predictions.”

The other authors of the continent-wide study are Jeremy Ely of the University of Sheffield and Indrani Das of Lamont-Doherty. The additional authors of the Nansen Ice Shelf study are Winnie Chu, Indrani Das, Marco Tedesco, Kirsty Tinto, Christopher Zappa and Alexandra Boghosian of Lamont-Doherty; Massimo Frezzotti of ENEA SP in Italy; and Won Sang Lee of the Korea Polar Research Institute.  The research was funded by NASA, the U.S. National Science Foundation, the Old York Foundation and the Korean Ministry of Oceans and Fisheries.