The Way We Were: Climate and Human Evolution

It has been an extraordinary year of exploration and discovery at Lamont. During the month of December, as 2017 draws to a close, we are sharing a series of articles on our website that capture research highlights of the calendar year. This is the first article in the series.

The story of human evolution is rooted in eastern Africa, where hominins, ancestral species directly related to humans, first appeared. A remote desert region around northwest Kenya’s Lake Turkana is the source of many important early human fossils and artifacts. This region is where Lamont-Doherty Earth Observatory paleoecologist and geochemist Kevin Uno has been collecting fossils and sediments, searching for evidence about the climate, vegetation, animals, and water available to our ancestors millions of years ago. Among Uno’s goals is to understand the role of climate in human evolution.

“People are curious about how we as humans got here. I am trying to understand what role climatic change played in the evolution of our species,” said Uno. His early findings give us new information about the genesis of human life and raise fascinating new questions.

In a study released in June 2016, Uno and a team from Lamont, including geochemist Pratigya Polissar and paleoclimatologist Peter deMenocal, provided a 24-million-year record of vegetation trends in eastern Africa. The record lends weight to the idea that humans developed key traits – flexible diets, large brains, complex social structures, and the ability to walk and run on two legs – while adapting to the spread of open grasslands. The findings strongly suggest that between 24 million and 10 million years ago, long before any direct human ancestors appeared, there were few grasses and woodlands presumably dominated. Then, with an apparent shift in climate, grasses began to appear. The study shows that the trend continued through all known human evolution, leading to a dominance of grasses by a few million years ago. 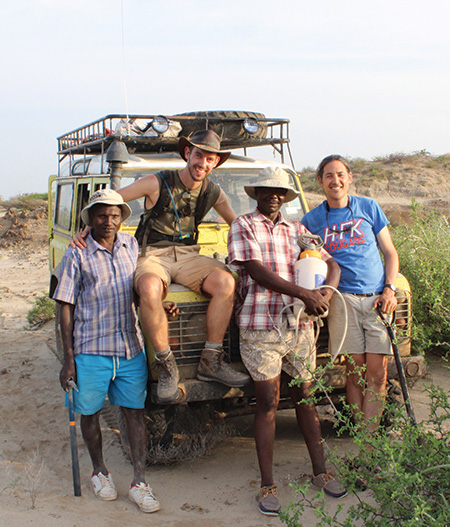 “The entire evolution of our lineage has involved us living and working in or near grasslands,” said Uno.

This year, Uno participated in field expeditions to the Turkana Basin region on both the eastern and western sides of Lake Turkana. He and his team sought to learn more about how climate has varied during the past five million years.

“I wanted to go to the fossil hominin sites and see if we could use organic geochemistry tools, which is something we really had never done before. We want to learn new things about the climate, vegetation, and environmental context of our ancestors,” said Uno. The discovery of 3.3 million-year-old stone tools – the oldest in the world – led Uno to search for clues about the environmental context of early humans as they crafted and worked with these tools.

To reconstruct ancient habitats, Uno and his colleagues draw information from two sources: leaf waxes of plants that lived millions of years ago and are now preserved in fossil soils, and ancient mammal teeth, such as those from elephants and hippopotamuses. Chemical and isotopic analysis of those materials in laboratories at Lamont enables scientists to discern the plants, animals, and water sources that were available in the ecosystem for these animals to eat and drink.

“Teeth are unique because they form anywhere from a year to ten years in big animals, and that’s like a little data logger or time capsule from millions of years ago,” said Uno. His early analysis indicates that changing rainfall patterns, from one to two rainy seasons per year, may have had a significant effect on the vegetation and animals.

“A big question to me is, how long has the two rainy season mode of operation been in existence?” Uno’s preliminary data points to a single annual rainy season around 3.5 million years ago.

“I’m trying to understand the evolution of the modern system of two rainy seasons per year. When it’s really hot, as it is in eastern Africa, water matters. You add rain and things get green and animals are happy, whereas long dry spells are very challenging for them. How did hominins cope with changes in the availability of their food sources? That’s one of the questions I’m working on by analyzing teeth.”

By tracing the biomarkers on ancient plant waxes, Uno gets a broader perspective on the vegetation history of the region.

“If you look at isotopes in teeth, they’ve been filtered through the dietary choices of the animal. But with the plant wax biomarkers, you’re looking at actual remnants of ancient plants, and they record the entire landscape. They are preserved for millions of years because these waxy coatings on leaves are made up of saturated hydrocarbons, which are very tough to break down.”

Climate is a key factor determining the types of vegetation that can grow in an ecosystem. By recreating the plant foods and habitat available at a given time, it is possible to learn about changes that occurred during important transitions in the evolution of humans. Of particular interest to Uno is a time period known as the Pliocene epoch, which was the last time Earth experienced atmospheric CO2 levels as high as they are today. Then CO2 levels were at about 400 parts-per-million (ppm), and that is approximately where they are right now.

The Pliocene occurred between 5.3 and 2.6 million years ago, a time span when many mammals and birds evolved into roughly modern forms and when early hominins first appeared. Uno explains that of all the Turkana Basin fossils believed to be from the Pliocene, less than one percent are from hominins. Scientists believe that finding indicates that few hominins inhabited Earth compared with other animals. They have also discovered a variety of hominin species.

“Over the last five years we have found there was a much higher diversity of hominins in the Pliocene, five to six species more than originally thought,” said Uno. It has been impossible to determine which are our direct ancestors. “It’s been like looking for a needle in a haystack.”

As painstaking as Uno’s research is, profoundly important questions drive his work.

“I find it fascinating that our hominin ancestors were so low in abundance, perhaps just tens or hundreds of thousands, but now there are 7.5 billion of us. It’s hard to imagine this, but for a long time, hominins were not the dominant species on the Earth as we are today,” said Uno.

Exploring the environmental context of the Pliocene epoch will help tell the story of who these hominins were, why there were distinct species, and possibly how and why one form led to the evolution of modern humans.

“Today we are heading into a warmer world, one with more severe weather and whole host of other challenges that our societies will face. It’s important to pause and take a look back from where we came.” Uno notes, “The hallmark of modern humans is that we are so adaptable. It’s a wonderful thing about our species.”