When Permafrost Melts, What Happens to All That Stored Carbon? 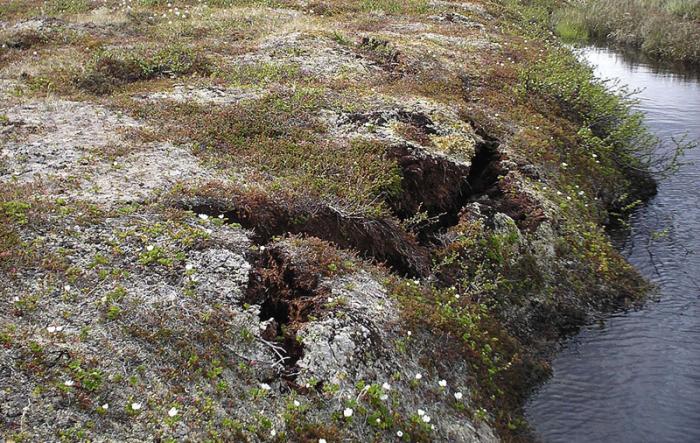 The Arctic’s frozen ground contains large stores of organic carbon that have been locked in the permafrost for thousands of years. As global temperatures rise, that permafrost is starting to melt, raising concerns about the impact on the climate as organic carbon becomes exposed. A new study is shedding light on what that could mean for the future by providing the first direct physical evidence of a massive release of carbon from permafrost during a warming spike at the end of the last glacial period.

The study, published this week in the journal Nature Communications, documents how Siberian soil once locked in permafrost was carried into the Arctic Ocean during that period at a rate about seven times higher than today.

“We know the Arctic today is under threat because of growing climate warming, but we don’t know to what extent permafrost will respond to this warming. The Arctic carbon reservoir locked in the Siberian permafrost has the potential to lead to massive emissions of the greenhouse gases carbon dioxide and methane to the atmosphere,” said study co-author Francesco Muschitiello, a post-doctoral research fellow at Columbia University’s Lamont-Doherty Earth Observatory.

To understand how melting permafrost influenced the carbon cycle in the past, the scientists examined the carbon levels in sediment that accumulated on the seafloor near the mouth of the Lena River about 11,650 years ago, when the last glacial period was ending and temperatures in the Northern Hemisphere spiked by several degrees.

Evidence from ice cores suggests that atmospheric carbon dioxide rose from about 190 parts per million to about 270 ppm during this period. What remains unclear is how much of that increase can be attributed to greenhouse gases being released into the atmosphere as the permafrost melted and its once-frozen plant material thawed and decayed.

The new study looks at a parallel process, estimating the change in the amount of carbon released from permafrost by examining the amount of organic carbon that was washed from destabilized permafrost into the Lena River and out toward the Arctic Ocean. When permafrost starts to melt, its top “active layer” deepens and the soil loosens, allowing water to flow through it more easily, releasing greenhouse gases to the atmosphere and washing away stored carbon. 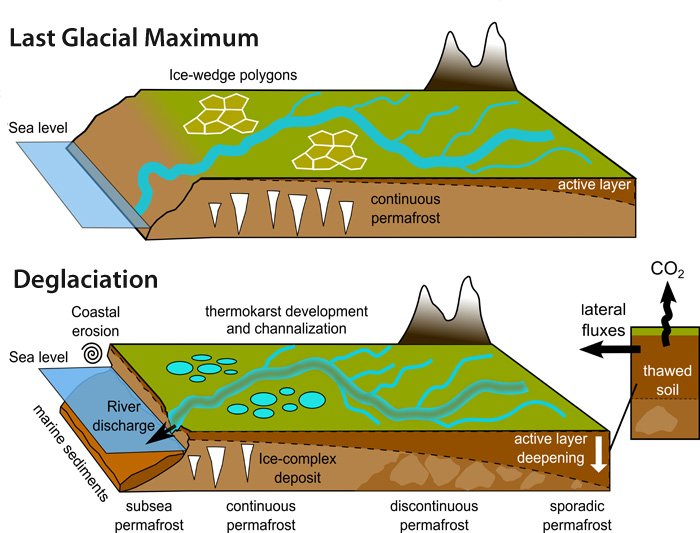 The Lena River has the second-largest drainage basin in the Arctic region, with about 2.5 million square kilometers of land draining into it. Water runoff in the basin washes soil and its organic materials into the river, which carries it downstream to the Laptev Sea on the Arctic Ocean, where some of it settles to the seafloor and is buried by new sediment washing in. By drilling a core through the sediment layers and analyzing the layers’ chemistry, scientists could extract a picture of changes in river-borne soil – including its carbon content – over thousands of years.

The scientists used molecular compounds, including lignin phenols that are specific to land-based plants and a waxy polymer derived from plant cuticles, to fingerprint specific sources of organic carbon in the sediment core.

“The climate warming during the last deglacial period offers an extraordinary benchmark against which the stability of permafrost carbon can be evaluated,” Tesi said. “Therefore, this study can also provide insights to assess the vulnerability of high-latitude soils in response to future climate changes and understand the expected feedback from permafrost soils.”

Today’s Arctic warming is already affecting the chemistry of freshwater rivers in Alaska, recent research suggests. An unrelated study published last month in Geophysical Research Letters tracked the chemistry of the Yukon River over  30 years and found significant increases in calcium, magnesium and sulfate, likely from runoff of water that had flowed through newly thawed soil and weathered newly accessible rock.