Where Is All That Carbon Dioxide Going?

An international team of scientists announced today at the Bonn climate talks that human emissions of the greenhouse gas carbon dioxide are again rising this year, after three years of remaining basically flat. They project that emissions will reach a record 41 billion tons in 2017, alongside a projected 2 percent rise in burning of fossil fuels.

However, the carbon level in the air does not exactly parallel emissions; the ocean and land both absorb and give off large quantities of CO2, and the balance can vary year to year due to natural climate cycles and other factors. Scientists can only approximate the numbers. Atmospheric carbon dioxide actually went up at record annual rates of about 3 parts per million in 2015 and 2016, even though emissions were steady during those years. Levels continue to ascend this year, and will probably reach a record average of 405.5 parts per million.

Concurrent with the release of this year’s emissions figures,  Galen McKinley, a professor of earth and environmental sciences at Columbia University and its Lamont Doherty Earth Observatory, coauthored a paper published today in the journal Nature Climate Change, in which she and colleagues discuss the difficulties of tracking the sources and destinations of carbon dioxide. Below, she explains.

Which parts of the system do we best, and least, understand?
The cumulative ocean uptake of all the carbon we have emitted over the industrial age has been quantified to within about a 10 percent error. Uncertainties are larger for the variability in the uptake over time. So, perhaps one year has a bit more uptake, the next a bit less.  The detailed spatial breakdown also has uncertainties, particularly as the scales get smaller. For example, we know that the North Atlantic is a region of very intense carbon uptake, but the uptake at any latitude and longitude is harder to nail down. On land, there is much knowledge about the processes driving uptake and release of carbon. But land varies widely from place to place, so scaling up our understanding from field sites is a major challenge. Until now, the global budget has estimated the land uptake as a difference between what is emitted and what remains in the atmosphere or goes into the ocean. But we’re making progress. Models have been developed based on observations and budgets at long-term field sites and in dedicated field campaigns. Now, these models are being used to directly estimate the land uptake for the first time. Of course, there are many uncertainties remaining. 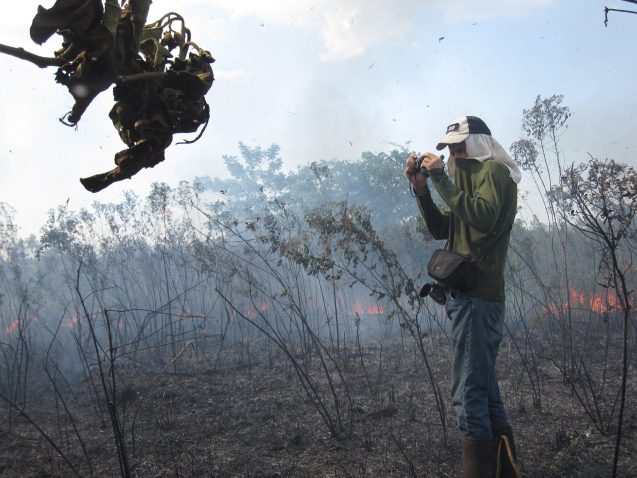 What happened in 2015-2016 to drive such sharp increases in atmospheric CO2?
In a year with a large El Niño such as 2015-16, the land biosphere, as a whole, took up less carbon. This was because the El Niño caused a lot of places to dry out and warm up. This caused fires in some places, and less plant growth in others. The ocean retained a bit more carbon. But the net balance was a larger growth rate of atmospheric CO2. Similar changes were observed with the strong 1997-98 El Niño.

Under the Paris climate accord, nations are supposed to report their emissions, and scientists try to verify the information. How reliable is the verification effort?
At present, the global carbon budget is not sufficiently precise to verify national emission estimates. First, because there are so many nations, and a bit more from one can easily balance out a bit less from another. And, because of the substantial uncertainties in the uptake by land and oceans. It is a long-term scientific goal to verify at least the integrated impact of emission reductions. Efforts are underway to track emissions regionally, down to the national level. These efforts have made great strides in recent years, but are still rudimentary. The current methods use field data, satellite data, and atmospheric transport models, all combined. To come up with a real verification system will require an explosion of real-time observational capacity, as well as improved models.

Do you think CO2 in the air will keep going up? If so, what are the implications?Whether or not CO2 levels will continue to rise depends on human actions. Emissions are currently at historically high levels, and at this rate the CO2 in the atmosphere will certainly continue to rise. Emissions have to be cut drastically for atmospheric CO2 levels to stabilize or decline. Warming climate and acidification of the ocean will continue as long as atmospheric CO2 continues to go up.

Could there be surprises that would suddenly change the carbon balance, and prospects for the future?
In the ocean, we believe that ocean circulation changes could impact ocean carbon uptake. There is evidence for such changes in the past. There is also a notion that the ocean has only so much total capacity, but this is complex and time dependent. On time scales of 10,000 years, the ocean should be able to absorb at least 85 percent of all emissions. The ocean mixes fully only once every 1,000 years, and it needs multiple mixes to sop up all the carbon. But since carbon is very soluble in seawater, in some sense the ocean capacity is infinite. If you care only about very long time scales, the carbon will be taken up by the oceans. But human society tends to care about much shorter time scales. For these, slowing ocean circulation certainly could impact the atmospheric CO2 load. On land to date, the cumulative carbon uptake of the biosphere is approximately zero. What I mean by cumulative is the integrated sum of all carbon emissions due to land use change since the preindustrial era, and carbon uptake occurring with forest regrowth and enhanced growth due to more CO2 in the atmosphere.  Right now, this cumulative effect seems to be no net uptake. At the same time, we know that climate warming will release at least some CO2 from soils and permafrost, and some forests are more vulnerable to drought and fire with warming. And. we need agriculture to feed people. So, there does not seem to me to be a large reservoir on land where one can expect lots of carbon to be naturally stored for the long term. Human actions could enhance some storage and reduce losses, for example with conservation practices in agriculture. But compared to the capacity in the ocean, likely accumulations will be small for hundreds to thousands of years. Nonetheless, on shorter timescales, the land can have a huge impact. The2015-16 El Niño illustrates this clearly.