News Subtitle:
"I love the wonder of understanding our world and how much there is to discover." 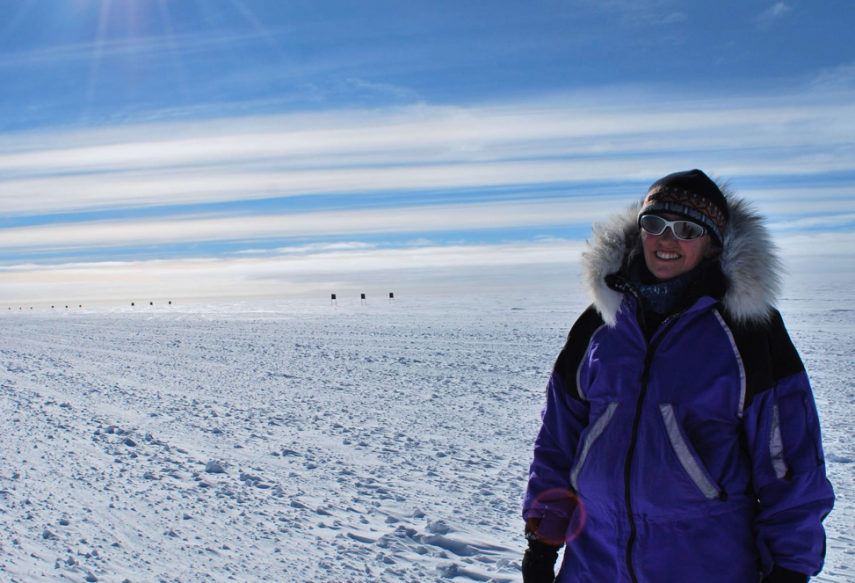 Lamont-Doherty Earth Observatory’s Robin Bell is living proof of the importance of encouraging girls and young women to study STEM disciplines. Without her breakthrough research, fueled by passionate intellectual curiosity, we would still be in the dark about essential aspects of the way our planet behaves. Bell is one of the world’s leading polar investigators and has been tracking ice for thirty years. She has coordinated ten expeditions to Antarctica and Greenland. And although she took her first expedition to Antarctica back in the 1980s, there is nothing routine about her approach.

Ask about the near completion of the landmark Rosetta-Ice Project she is currently leading, and Bell radiates excitement. The study, named for the enigmatic stone containing a decree written in three languages that led to the decoding of Egyptian hieroglyphics, is a large multi-disciplinary and multi-institutional endeavor with several major goals tied to different parts of the ice shelf system. Bell and her colleagues developed this research enterprise to monitor and map the world’s largest block of floating ice. For three years, the Rosetta-Ice team has been flying over Antarctica’s Ross Ice Shelf, assembling an unprecedented view of its structure and hints of how that structure has been changing over time. Rosetta flew for the last time during fall 2017, but the project’s scientific legacy will continue to thrive for years to come.

Once completed, the Rosetta-Ice Project will be a critical milestone in climate science.

“These data are going to be the basis for people to understand how ice shelves work for decades,” said Bell. “People are going to be able to go back and measure the ice exactly where we flew to see changes. It’s going to become a benchmark data set. It’s a beautiful thing.”

Her excitement about Rosetta and the resulting dataset are indicative of Bell’s commitment to science. Bell leads research on ice sheets, plate tectonics, and river systems, and heads up the development of technology to monitor our changing planet. As chair of the National Academy of Sciences Polar Research Board, she was instrumental in launching International Polar Year 2007-2008, a major multinational push to study the polar regions.

In 2016, Bell was voted by her peers to be president-elect of the American Geophysical Union (AGU). The professional scientific organization has more than 65,000 members in 139 countries. Its Fall Meeting is the premier opportunity each year for scientists from across disciplines to share their latest research and develop new collaborations. Bell assumes the presidency in 2019, the 100th anniversary of the AGU.

“The AGU is the leading group of scientists studying Earth and space science in the world. I will be president during the 100th anniversary, which I see as a chance to reflect but also to look forward. I want to work to help us communicate the wonder of our science and how it matters to our everyday lives. The AGU is leading the way to making science work better, for example, by addressing issues of harassment and bullying. I hope to help the AGU serve as a model of how science should be a fair and open place.”

Late last year, Bell took a public stand within the context of the #metoo movement with an op- ed published in Science that unmasked the ugly truth about sexual harassment in laboratories and on expedition.

“We have worked to increase the number of women in science and engineering by focusing on the science of diversity through programs like the NSF ADVANCE program. These efforts focused on changing hiring and mentoring practices, making huge strides in the number of women in science, but little attention was paid to the issue of harassment.  We were still averting our eyes.  Unethical behavior in science, in media, in entertainment, and in broader society has persisted. Now, suddenly we are talking about it.  The #metoo movement has been hard to ignore. It is becoming evident that harassment has consequences.”

This past year has inspired Bell.

“We have an opportunity to pivot to the positive. To get there requires zero tolerance for bullying and harassing; parity between men and women; and recognizing and rewarding positive, ethical leadership.”