Lamont-Doherty Earth Observatory’s Biological Oceanography Group works on a broad range of issues related to life in the ocean.  We are interested in large-scale patterns of marine production and how these patterns will respond to climate change as well as influence the course of climate response.  We use both laboratory measurements and take part in numerous sea-going studies to determine the factors controlling the production of marine phytoplankton.  These primary producers represent almost half of the biological productivity on our planet and support the ocean’s vast food webs.  We work in various ecosystems from polar seas to the tropics and study scales of processes ranging from global to individual cells using tools that span from satellites to molecular biology. 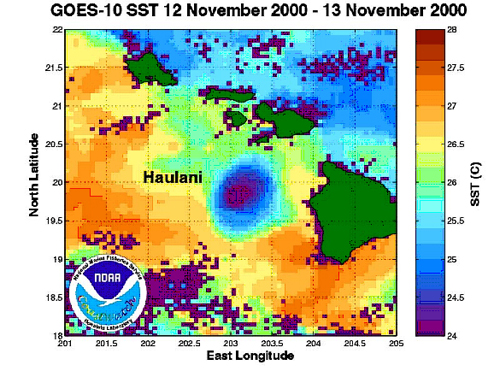 Cyclonic eddy Haulani observed leeward of Hawaiian islands, as viewed by sea-surface temperature (SST) imagery from the Geostationary Observing Environmental Satellite (GOES) on 12 November, 2000.  Surface temperatures in the center of the eddy were ~3º C cooler than outside the eddy owing to upwelling of deeper, nutrient-rich waters.

Large (~100-200 km) rotating bodies of water are routinely found on the leeward side of the Hawaiian islands.  When these ‘eddies’ are spinning in a counter-clockwise direction they are termed ‘cyclones’ and have significant impacts on the ecosystem of the upper, sunlit layer of the ocean. In 2000, R. Vaillancourt, along with colleagues at U. Hawaii and NOAA’s Honolulu lab investigated how the biology at the base of the marine food chain, the phytoplankton, was impacted by the passage of the cyclonic eddy Haulani.  They reported in the scientific journal Deep-Sea Research that the rotation of the eddy upwelled deep, nutrient rich seawater into the sunlit euphotic zone, enhancing the growth of certain types of phytoplankton known to flourish in more coastal waters.  Radionuclide measurements revealed a portion of this enhanced biological production rained down beneath Haulani sending organic carbon, recently formed from atmospheric carbon dioxide near the surface, to deep Pacific waters effectively removing it from atmospheric circulation for thousands of years.  The role of cyclonic eddies such as Haulani in sequestering atmospheric CO2 is a subject of intense study in oceanography. 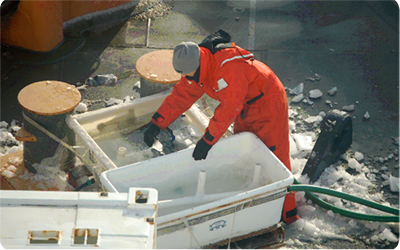 One of the challenges of working in the Arctic is incubating seawater without it freezing solid.   Here, a Lamont-Doherty research scientist works to retrieve incubation bottles that have frozen into the ion-deck incubators.  The work took place on the deck of the U.S. Coast Guard icebreaker Healy in the spring of 2007.

The cold, frozen seas at the north and south extremes of our planet may seem like an inhospitable place for life, but in fact are home to an abundance of marine organisms.  These polar marine ecosystems are also on the front lines of climate change because we suspect that any change in surface conditions will be most dramatic at the poles.  Ray Sambrotto, a Doherty Research Scientist at Lamont-Doherty is part of the Bering Ecosystem Project.  This National Science Foundation sponsored project seeks to understand how the rapidly retreating ice in the northern Bering and Arctic Oceans will impact the abundant fish, birds and marine mammals in this productive region.  Several research cruises are planned over the next few years using icebreakers to sample across the ice.

SeaWiFS image of chlorophyll concentrations in the Mid and South Atlantic Bights from 9 Oct. 1999.  A fresh water plume is seen as a jet of high “chlorophyll” extending from the Outer Banks.  The OCT99MAB cruise track and stations occupied during the entire cruise described in Subramaniam (2000) are shown in red with the stations sampled on the same day as this image shown in white.  Our in-situ measurements showed that this jet had extremely high CDOM absorption and was the runoff after three Hurricanes – Dennis, Floyd, and Irene had passed over North Carolina during the previous month.