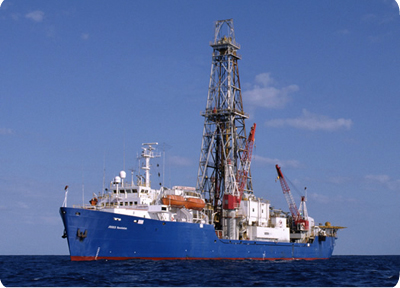 Work has begun on two different areas of subsurface microbiology. In one case characterizing the physiology and genetic diversity of microbes contained in deep subsurface cores from the Integrate Ocean Drilling Program (IODP); and in the other determining the response of aquifer microbial communities to CO2 injection and acidification.

Genomics and physiology of microbial communities from IODP cores

Microbial life constitutes the largest biomass on earth. The vast majority of microbes inhabit the deep ocean and the sediments below the ocean floor (the “deep biosphere”). More than 1030 organisms are estimated to be present in each location – many times more than in all terrestrial environments combined- making the deep biosphere the “unseen majority”. Recent evidence suggests that many of these microbes are metabolically active and contribute to biological and geochemical processes of global importance. For example, the microbes of the deep ocean control the chemistry of ocean water that is later upwelled to surface environments where primary production occurs. The metabolic activity and geochemical importance of microbes in the sediments below the ocean floor is not as clear. The extreme environmental conditions of temperature, pressure and low abundance of organic material and electron acceptors in the sediments/basalts beneath the ocean do not resemble most marine or terrestrial environments. This presents novel challenges to the organisms in terms of nutrient and energy acquisition. Microbes harbor vast, undescribed metabolic potential. This metabolic potential is actively shaping our environment but we remain blind to the full array of biogeochemical transformations. We have begun to describe the changes in physiology and genetic diversity that occur with depth in select IODP sediment cores in an attempt to understand the genetic basis for microbial metabolism in deep ocean sediments. We are also interested to examine the importance of lateral gene transfer- the exchange of genes between two cells- in shaping the microbial diversity of the deep biosphere. These studies will help to shed some light on the ecology and evolution of microbial life in these extreme environments that have been isolated from surface biomes for an extremely long time but may continue to fill important functional roles in Earth’s biogeochemical cycles.

While extensive research has begun to investigate the geophysical and geochemical dynamics of subsurface carbon sequestration, the response of aquifer microbial communities to these activities has only been investigated in theoretical terms. Biogeochemical cycles and rates remain poorly constrained in subsurface systems. While subsurface systems are often thought of as being dominated by equilibrium chemistry they can be poorly buffered, easily impacted by anthropogenic disturbances, and prone to influence from non-linear biological dynamics. Microbial communities are capable of altering the range and rates of geochemical reactions in the subsurface and have important implications for mineral weathering, carbon sequestration, and groundwater chemistry. These processes cannot be fully understood without a predictive understanding of the interaction of microbes and their environment. We have begun to perform exploratory analyses of microbial community dynamics during laboratory experiments and field-scale aquifer injections. The ongoing work will provide pilot data on the response of aquifer microbes to redox changes similar to what would occur during engineering solutions for geologic carbon sequestration. This project will be used to evaluate the viability of large scale carbon sequestration strategies and will aid in understanding the consequences of pH disturbances, due to either natural or anthropogenic causes, on aquifer resources. Initial results confirm that there is a dynamic microbial response to carbon dioxide injection and indicate the importance of further research regarding microbial implications for carbon sequestration strategies.