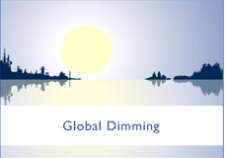 Is our planet becoming a darker place? As recorded by an array of hundreds of instruments deployed around the Earth, the period from the late 1950s through the early 1990s witnessed a clear and measurable decline (as much as 5% globally) in the amount of sunlight reaching the ground. In some regions the drop was even steeper. In the United States, for example, sunlight decreased 10 percent over that period. In Hong Kong, the figure was a shocking 37%.

What is going on? In a word, pollution. Satellite measurements show that although the sun remains as bright as ever, less sunlight has been penetrating through the atmosphere to the ground, accounting for the phenomenon now known to scientists as “global dimming.”

Pollution dims sunlight in two ways. First, it bounces incoming light off the airborne particles and back into space. Second, the pollution causes more water droplets to condense out of the air, leading to darker, thicker clouds—which, of course, block more sunlight. Global warming also contributes to dimming: warmer air holds more water, and when condensed the warmer clouds are heavier and darker. For that reason, the dimming appears to be more pronounced on cloudy days than sunny ones.

Recent studies suggest that the phenomenon of global dimming may have slowed or stopped in the 1990s, probably due to efforts in several developed countries to clear up air pollution. Indeed, satellites measured less global cloud coverage from the early 1990s to 2002. These findings, however, add a new level of mystery to the debate on global dimming and its causes.

Less sunlight, after all, should mean lower ground temperatures. But this notion runs counter to the expectations of global warming. On the other hand, climate simulations suggest that global warming and solar dimming can coexist. Sunlight is used for warming our planet’s surface and for keeping the water cycle running. Hence a suppressed water cycle with less rain would be very likely in a dimmer world. Also, dimming might have slowed global warming.

If that is so, then clearer and sunnier days from reducing pollution levels could mean bad news yet: without the cloudiness and pollution to counter rising temperatures, more sunshine could be expected to accelerate the process of global warming.