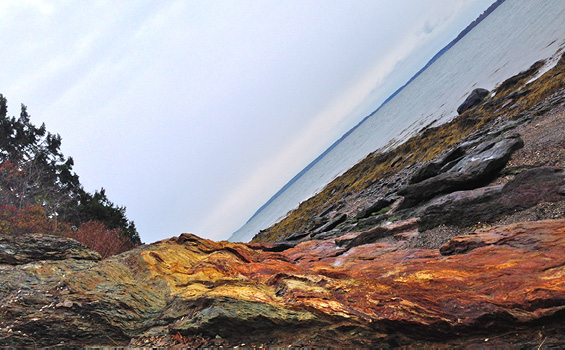 Kat Allen, a researcher at Lamont-Doherty Earth Observatory, started writing poems about science as a graduate student, in part to make studying for qualifying exams less painfully serious. At Lamont, she sent out a poem with each week’s reminder about the geochemistry department’s coffee social hour. Her “Geopoetry” blog grew from there because, she says, “It was just too much fun to stop.” Kat is currently an instructor in Columbia's Frontiers of Science program.

The Carbon Vault
Posted By: Katherine Allen on June 10, 2016 The skin of the Earth is the color of tar,

Ridged, freshly healed like the seams of a scar.

In spaces beneath, a dark final vault.

Carbon is cached with a strong crystal lock,

Ashes to ashes, rock back to rock.

This is one in a series of posts by Katherine Allen, a researcher in geochemistry and paleoclimate at the School of Earth & Climate Sciences at the University of Maine.

Images representing the past and present Island of Manhattan. Credit: Wildlife Conservation Society

By falcons perched on balconies, raccoons slinking through the park,

Isn’t it amazing, or isn’t it disturbing, we say,

A creature’s daring foray into our hard-paved empire.

I prefer the long view – that of Manhattan Schist, let’s say,

Having been buried in mile-thick ice,

Over and over again, with each ephemeral ice age.

From that vantage, it is we who are the curious invaders, an encrusting colony

Of organisms with a stunning talent for creating habitat for ourselves.

Diggers of ditches, un-earthers of bones, surveyors of history

All tell a tale of an earlier island of Eden,

Not so long ago.

The Schist, sparkling darkly in the park, is not surprised

By ‘coons and hawks, toothed and clawed neighbors,

Nor by the eels, pipers, moths, terrapins, raptors, seals, spiders,

On this landscape, but I refuse to despise my own species.

I refuse to accept the conservationist’s guilt,

To draw boxes around wildness and around civilization,

And ignore the reality that these two can never truly be separated.

Instead, I am in awe of the spectacular forces that shape my world,

From rising skyscraper to ascending oak.

I live my animal life deliberately,

Knowing that we can never extract ourselves from Nature,

And that the boundaries we draw are not real.

This is one in a series of posts by Katherine Allen, a researcher in geochemistry and paleoclimate at the Lamont-Doherty Earth Observatory and the School of Earth & Climate Sciences at the University of Maine. Foraminifera are tiny plankton that typically build elaborate shells of calcium carbonate. Their kind have lived in the ocean for millions of years. Photo: Kelly Strzepek.

Heaved upwards from your deep and watery grave,

From the quiet murk onto a chaotic, brine-encrusted ship deck,

You’re ever so carefully washed free from the mud,

Now through my looking glass, you lie scattered

Lying in broken glory, shards of a former world;

Some people say there must be a knowing architect behind all this design;

I understand the sentiment.

How is it, and why is it, that you craft such castles

Smaller than a grain of sand?

I know it is your work, not that of some artful watchmaker;

Lay down their mortar and stone, precisely and perfectly.

Still, it’s hard to believe my eyes. I am desperate to ask you,

Clever protist with no brain, to tell me all your secrets.

I wonder if some life-form, eons hence,

Will ever find my ancient bones,

Marvel at their beauty,

And imagine the life of the mysterious being that grew them. This summer, a space probe that has been traveling for 9 years will finally reach Pluto. Image: JHUAPL/SwRI

Far away, a beloved dot

Arcs through cold and shrouded spaces,

Not lonely, as we had once thought,

But circled by more rocky faces:

Classified as “dwarf” or pseudo,

And though such bodies now abound,

On the hunt for Planet X,

Tombaugh found a ball of light,

Among a crowd of tiny specks;

Nine years ago we took a dare –

To deepest space, a scouter hurled

… and soon it will be there! The global ocean buoy network has been expanding in recent years. Accounting for small, consistent offsets between temperatures measured by buoys and by ships reveals a greater global warming trend than previously calculated for the past 15 years. Image: Maintenance workers on an ocean buoy, NOAA.

The “hiatus” was mostly illusion.

They say that the keys

Are the poles and the seas …

The next job: reduce the confusion. While we vicariously spied

It’s been a wonderful ride. I hear that the Archean Earth

Spewed lava and was hot,

(While much later, “Snowball Earth,”

Some have said that life sprung out of

Based on carbon records, too.

(We have to wait a long, long time

for T-Rexes, Fish, and Gators)

The Prot’rozoic was really wild,

The rest is a bit hazy.

Half a billion years ago

Is when it gets exciting …

Then disaster strikes them down,

And we soon approach some names

That are difficult to rhyme.

Gondwana drifts to the South Pole,

The world was likely colder,

and sea level took a fall.

So ends the years of trilobites

But soon we get new forms of life,

And we can all go fishin’!

Finally the land joins in,

And starts to grow green stuff,

(are you still enjoying this,

or have you had enough?)

(we think this lowered CO2,

but no one really knows).

The Carboniferous was lush,

(that’s where our coal is from!)

(though some say they were dumb).

Then the grimmest death so far,

with reptiles big as cars.

We leave aragonitic seas behind

And move towards today,

Though continents were not in place,

About 100 million years ago

So now the ocean’s buffered well,

(and planktics can be found!)

And THEN Earth has a real bad day,

Life is burned and charred.

(Holy cow, this is quite long,

was anything but steady.

It started hot, they also say

that CO2 was high;

(I hear that bats could fly).

Himalayas cause a ruckus,

We start to get some glaciers,

From the Greenhouse to the Icehouse

Then humans come along (that’s us)

and everything gets silly!

So there you have it, Earth through time,

I surely skipped a lot of stuff,

And may have got some wrong.

I hope if you’re still reading

that your brain is not too vexed,

This poem was first published on the author’s website on May 22, 2009.

To feed our own species, we race,

To insects, that flower

Is not just a beautiful face.

When sea level drops, pressure at mid-ocean ridges decreases, which may influence the production of ocean crust. A new study suggests that the pattern of hills on the sea floor reflects the timing of sea-level change during ice age cycles. Illustration: adapted by P. Huey/Science

Since the dawn of mankind, I imagine we’ve gazed

In wonder and awe at the sky’s starry crown;

More recently, we have been deeply amazed

By the long-obscured, staggering view looking down

To the depths of the sea, through crust, and below

Where rock moves like taffy, dark forge of the Earth,

A womb steeped in intrigue, the mantle gives birth

We humans gaze down from our ships, our sea cruises

We probe this vast landscape with sound waves and drills;

With a rhythm, it seems, that’s tied to the sun!

Of rock and of sediments, piled by the ton

Rippled and riddled with tales of ice ages;

From ridges revealed, a pattern discovered

Orbital rhythms in a seafloor slice,

The pulse of the planet, a sculpture uncovered,

Does the deep earth exhale in concert with ice?

The Most Astonishing Thing
Posted By: Katherine Allen on February 27, 2015 A super-massive black hole, roughly 12 billion times as massive as our sun, has been discovered at the center of a bright quasar. The light reaching us now from that distant location has been traveling for billions of years, and thus offers a glimpse into the earliest stages of the universe. Image: NASA/JPL-Caltech

The most astonishing thing about the universe, in my eyes,

Is not merely its gargantuan, unfathomable size,

But the way its vastness ferries gorgeous, primordial light,

So that as we look up into the night,

The farther afield our gaze penetrates, the higher we climb,

The farther we can see back in time.

Flashes of history race towards us full-throttle,

At the speed of light traversing a fabric expanding,

These waves touch our shores, and fuel our understanding

Of quasars and black holes, the light and the dark,

From which all this sprang – upon us, the story rains:

Of how we arose with star stuff in our veins.