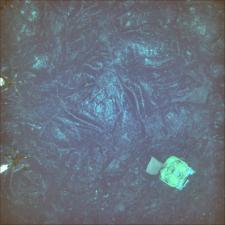 This project is the continued analysis of seismic data collected on a 4x4 km array of ocean bottom seismometers (OBSs) deployed at the Ridge 2000 Integrated Study Site at 9°50'N on the East Pacific Rise from October 2003 through January 2007. Results to date include: recording a ~2 year ramp up in seismicity associated with an eruption on January 22nd 2006 (Tolstoy et al., 2006), evidence for strong tidal triggering of seismicity associated with peak extensional stresses (Stroup et al., 2007), and indentification of an along-axis hydrothermal circulation cell with on-axis downflow (Tolstoy et al., 2008). Work continues on various aspects of these data including analysis of the first ever mid-ocean ridge eruption captured on OBSs, and integration of results with other multidisciplinary data sets collected at this site as part of NSF's Ridge 2000 program.