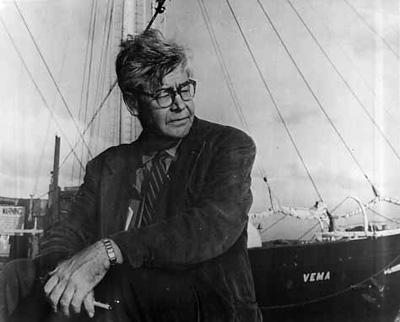 A Brief History of Marine Geology & Geophysics at Lamont

What was the state of knowledge about our planet as the Second World War drew to a close? The three quarters of the Earth covered by seas were virtually unknown. Until that time very little effort had been put towards discovering what lay beneath the oceans. And yet during the war years, the US Navy had found that sound pulses used for locating enemy submarines also reflected from the seafloor, and the time taken for sound to travel down and back could be used to measure water depth.

Maurice "Doc" Ewing was a seismologist. He knew that elastic waves generated by earthquakes or man-made explosions reflected off structures within the Earth and could be used to determine the depth and shape of those reflecting structures. After Lamont was founded in 1949, Ewing negotiated the purchase and refit of a 200' pleasure yacht, renamed the "Vema". He installed two kinds of instruments on this new ship: A modified Navy echo sounding system, which transmitted high frequency sound waves toward the seafloor and recorded their returning echoes, thus providing a measure of water depth; and a seismic reflection system consisting of towed listening devices called hydrophones together with a low frequency sound source, first dynamite, then later a towed pneumatic sound source called an airgun. The seismic system was capable of detecting features of geologic interest buried far below the seafloor. With these instruments, and the mobility afforded by a large ship, Ewing and colleagues set out to explore the world's oceans. And that is how Marine Geology and Geophysics began at the Observatory. By year 2003, Lamont ships ("Vema", "Robert D. Conrad", and "Maurice Ewing") sailed a total of approximately 3 million miles performing scientific exploration in all oceans of the world.

Support for these pioneering exploration efforts came initially from the US Navy, which regarded knowledge of the seafloor as critical to the nation's defense interests during the "cold war." Starting in the 1960s, however, the National Science Foundation began to provide more and more of the funding for marine geological and geophysical research. Today, most of the MG&G Division's research support comes from the NSF. Ewing was a resourceful scientist; he soon added other kinds of scientific instruments and sensors to the seismo-acoustic instruments already aboard Lamont's research vessels. Coring and dredging devices to obtain seafloor samples, instruments for measuring the flow of Earth's heat through the seafloor, and sensors that measured the Earth's gravity and magnetic fields all added valuable data to the knowledge base that Lamont's ocean-going ships compiled. A major scientific breakthrough came within two decades of the start of this global ocean exploration effort: pioneering research by Lamont and other oceanographic institutions led to the discovery and mapping of the globeencircling undersea mountain range that we know today as the mid-ocean ridge system. Mid-ocean ridges are the sites where new ocean crust and mantle is generated from molten material upwelling from deep in Earth's interior. The hypothesis of seafloor spreading describes how the hot, new material is emplaced more or less continuously at a mid-ocean ridge as the older, cooling ocean crust and mantle (the lithosphere) moves laterally away from the ridge axis to make room. On a cruise to the south Pacific in 1966, Lamont's Walter Pitman obtained crucial evidence that confirmed seafloor spreading. Pitman noticed that recordings of the Earth's magnetic field revealed a pattern that was symmetric with distance from the mid-ocean ridge axis in the southeast Pacific, an observation predicted by seafloor spreading. These discoveries ushered in the era of Plate Tectonics, a theory that describes the Earth's surface as broken into several large internally rigid shells or plates, and attributes most of the world's tectonic activity, including earthquakes and volcanoes, to the interaction of these plates along mutual boundaries –- midocean ridges being one of the three types of plate boundary.

Plate tectonics gave researchers a broad foundation for understanding how our planet works, and it provided many testable hypotheses that have fueled research in the Earth sciences for many years. In the oceans, attention has been directed to learning the details of geological processes operating at plate boundaries -- the mid-ocean ridges segmented by transform faults, and the plate subduction zones bordering the Pacific and other oceans -- as well as processes like seamount volcanism occurring in plate interiors. The continental margins have received their share of attention, too. These vast accumulations of sediment shed from the continents are often host to economic deposits of oil and gas, and provide a record of sea level fluctuations over the past 200 million years.

Lamont MG&G scientists have been in the vanguard of these ocean research activities. Over the years, the tools of exploration have improved, allowing us to probe deeper into the Earth with MultiChannel Seismic (MCS) Reflection techniques, and map larger areas of the seafloor in ever greater detail with multi-beam bathymetry mapping and side-looking sonar imaging instruments. While the surface ship has remained the "work horse" of marine science, other type platforms and vehicles have played an increasingly important role in MG&G exploration efforts. Among these are: submarines, particularly for under-the-ice work in the Arctic Ocean; satellites, with their ability to cover large areas of the oceans very rapidly (and revisit the same area many times); robotic vehicles, both tethered to a mother ship, or free-swimming; and manned submersibles, the only way humans can travel to the floor of the deep ocean. "Free-swimmers," or Autonomous Underwater Vehicles, allow scientists to survey small areas of the seafloor with high-resolution imaging and measuring systems. In 1999 an AUV named ABE (Autonomous Benthic Explorer), operating 20 m above the seafloor in water depths of 2600 m, allowed Marie- Helene Cormier, Bill Ryan, and colleagues from Woods Hole and the University of Hawaii, to map fresh lava flows along the East Pacific Rise in unprecedented detail (2.5 m² "footprints").

Large, integrated sciences programs, funded by the NSF, grew to prominence in the wake of the plate tectonics revolution. Lamont scientists helped guide these efforts, which brought new funding to MG&G studies, and Lamont scientists continue to participate in these focused, community-driven research initiatives. First among the large, integrated efforts was RIDGE, which as the name implies, is dedicated to understanding the phenomena and processes associated with the production of new crust and mantle at mid-ocean ridges. In its most recent configuration, Ridge 2000 is a community-based science initiative focused on integrated geological and biological studies of the Earthencircling mid-ocean ridge system. More recently, the NSF established a multidisciplinary program dedicated to studies of the continental margins. The NSF MARGINS initiative seeks to understand the complex interplay of processes, including lithospheric deformation, magmatism, erosion and sedimentation, and fluid flow, that govern continental margin evolution. The goal of MARGINS is to foster focused and coordinated, interdisciplinary investigations of these processes. 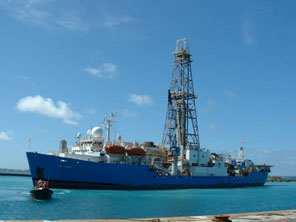 In the late 1960's Lamont, together with several other oceanographic institutions, founded JOIDES, a consortium dedicated to scientific drilling in the oceans. Lamont accomplishments in the early days of the JOIDES Deep-Sea Drilling Program included age-dating of reversals in the Earth's magnetic field, documenting the "drying up" of the Mediterranean Sea 5 million years ago, determining when the Antarctic ice cap began to form, and most significantly, validating seafloor spreading by showing that ages of the oldest sediment overlying ocean crust increase uniformly away from mid-ocean ridges. More recently, Lamont scientists have used ocean drilling to investigate the history of global sea level variations, measure the flow of fluids through fractured rock of the ocean crust, and to determine the thermal and mechanical properties of the oceanic lithosphere. One of Lamont's major contributions to scientific ocean drilling began in the mid-1980s when the Observatory established the Borehole Research Group. The BRG was charged with providing basic down-hole geophysical measurement (logging) services to the Ocean Drilling Program, as well as developing new types of borehole logging instruments, adapting oil field logging tools for use in the ODP, and maintaining a data base of all logging measurements on behalf of the ocean drilling community. Now, as we transition from the ODP to the new, Integrated Ocean Drilling Program with its more complicated international partnerships, and its multiple drilling platforms, Lamont is poised to play an even larger role in the ocean drilling science of the future.

Over the last decade or so, research in general has clearly become more interdisciplinary in nature. Advances in one discipline stimulate research in another. For example, the marine geosciences intersected with archeology and antiquities studies when Bill Ryan and Walter Pitman suggested that the biblical story of Noah's flood, and similar legends, could be explained as the sudden inundation of the Black Sea basin when global sea level rose after the last ice age and the Mediterranean's height exceeded the "spill point" of Turkey's Bosporus Strait. Scholars of antiquity were profoundly challenged by this scenario, as it brought into sharp focus what might happen when geological processes and human civilization intersect. Another example comes from the Observatory's own back yard: the Hudson River and Estuary. Using the highresolution sonar mapping tools developed for ocean exploration, Robin Bell and colleagues surveyed the river bed from the estuary to the limit of tidal influence near Troy, NY. This basic mapping activity is essential to research on a wide range of river issues, including sediment and contaminant transport, carbon and nutrient cycling, and the effects of global climate change. Human impacts complicate natural processes, but must be well-understood if we are to institute wise stewardship of the Hudson and other river and estuary systems in the face of mounting pressure from development and increasing population. Looking back across the last five decades, it seems clear that marine geological and geophysical research has truly been curiosity driven. The quest for knowledge and the spirit of adventure are hallmarks of the trade. For all our efforts the earth beneath the sea is still poorly known, and much remains to be learned. In the final analysis, marine geologists and geophyicists are explorers by nature. This quality has served Lamont science well in the past, and will continue to do so in the future.