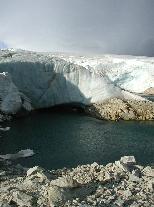 We all know that climate is either going to change, or is already doing so, as a result of human activities changing the atmosphere's composition and its land surface. If climate change occurs gradually then it is hoped that societies will have time to adjust to the undoubtedly large consequences, such as an increase in occurrences of summertime droughts in North America or the submergence of large areas of Bangladesh under rising sea levels. If, on the other hand, the changes occur abruptly there may be no time to plan, causing severe stress on the resource systems - agriculture, water, energy, for example - that support complex social systems and even risking political and economic chaos.

We know from studies of the climate of the last thousands and tens of thousands of years that climate has changed abruptly in the past. We also know that many different aspects of the climate can change abruptly. Probably the best-known changes are the sudden cessations of the ocean currents that bring warm subtropical water up into the North Atlantic Ocean and which, in present-day conditions, allow the northwest coast of Norway to be ice free in winter. These shifts in ocean circulation have occurred repeatedly in the past and there is at least some fear that greenhouse warming could cause it to happen again.

Abrupt changes in precipitation around the world have also occurred. There is abundant evidence of a catastrophic drying of Mesopotamia (modern day Iraq) around 4,200 years ago, coincident with the collapse of the culturally advanced Akkadian empire. Collapses of advanced Indian civilizations in North, Central and South America within the last two thousand years also coincided with well-documented droughts. These must have been caused by abrupt shifts in the circulations of the atmosphere and ocean but we do not know how or why these occurred. However, wherever we look, it appears that the climate system has different ways of "operating" and that it can rapidly jump between them.

Climate researchers are beginning to better understand the nature and causes of abrupt climate change. These advances are being used, amidst a sense of urgency, to assess the future risks of climate change. We know that El Niño exerts a powerful control over North America precipitation but what if greenhouse warming causes abrupt shifts in the behavior of El Niño, as some models suggest? Will North America be subjected to persistent drought, or heavy rain and snow? Was the stunning drying of the Sahel since the 1960s a step function on the route to a climate partly made by Man? Are rising greenhouse gases permanently altering the atmosphere circulations of the northern and southern mid and high latitudes, causing surprising regional climate changes, such as winter drought in Spain but advancing glaciers in Norway? Is the last summer heat wave in Europe, which resulted in an estimated 15,000 deaths, a "freak" event or are future summers going to be the same? Is the North Atlantic ocean circulation, which currently moderates climates in eastern North America and western Europe, slowing down?

In these pages we provide answers to often asked questions about abrupt climate change and introduce readers to current research on many of the questions just mentioned.